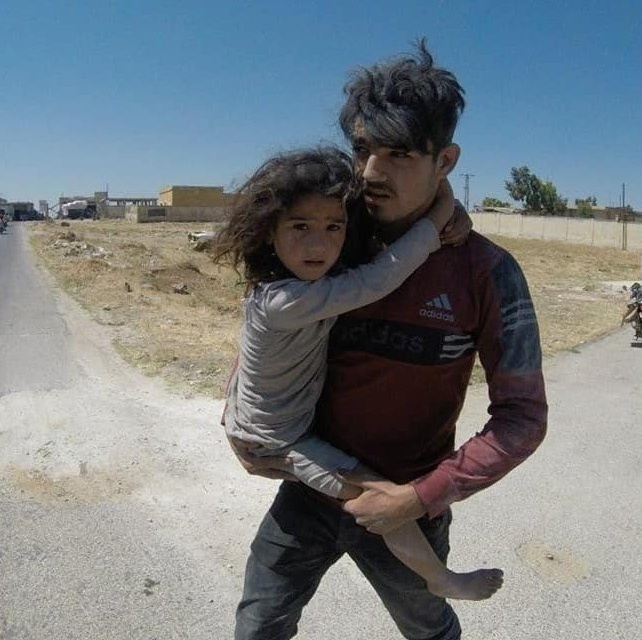 A man carries a child away from Assad regime shelling in northwest Syria, June 2021

Syria Direct speaks with farmers in southern Idlib and western Hama Provinces about the burning of their crops by Russia-regime attacks.

Musab al-Ashkr explains, “It is impossible to live, cultivate, and harvest in the area under this indiscriminate bombing.”

Local sources say at least 35 hectares of wheat were burned and several farmers killed in the latest assaults, breaking the ceasefire agreement reached by Russia and Turkey in March 2020.

Farmers, desperate to reap the harvest of wheat, lentils, and barley, are tending fields at night and traveling on foot to avoid detection by pro-Assad forces.

“All of this, for the sake of getting food, even if it is under bombardment and death – there is no way for farmers to survive other than their fields,” al-Ashkr says.

The death toll from today’s Russia-regime attacks has risen to eight.

Casualties are reported, as well as civilians fleeing from their homes.

Airstrikes continue as the death toll has increased to at least 7 and at least 13 injured including a woman who died and several members of her family injured. pic.twitter.com/kArDvhBfWo

An exodus of civilians is witnessed in the villages of Jabal Al-Zawiya and several areas in the Al-Ghab Plain, after Assad regime committed a massacre in the village of Ablin, south of Idlib, killing 11 people this morning.#Syria #Idlib#FireAssadOutOfWHO pic.twitter.com/1mKmbcyPT9

In their latest shelling of civilians in northwest Syria, Assad regime forces have destroyed a school near a camp for displaced persons.

I strongly condemn today’s attack close to a camp of displaced people, which destroyed a compound used as a school pic.twitter.com/RBLiT3Zsth

The Assad forces are using Russian-supplied guided missiles, indicating that their targeting of civilian sites is intentional.

ORIGINAL ENTRY, JUNE 9: Assad regime forces have stepped up shelling of villages in northwest Syria to which civilians are returning.

Attacks on the Jabal al-Zawiya region have escalated since last Friday. Residents are protesting that there has been no response from Turkey, which has had a military presence in the area since March 2016.

More than 4 million people in the opposition territory. Many of them, displaced by a Russian-regime offensive from April 2019 to March 2020, have been living in camps with poor conditions.

Since the start of 2021, at least 57 civilians have been killed in more than 520 documented regime attacks.

A local analyst summarized the situation:

Regime militias increased their shelling once they noticed that many families have returned to their homes in areas of southern Idlib and northern Hama [Province], close to the frontlines. The families have come back because living in makeshift refugee camps near the Turkish border is unbearable.

Intense escalation by the Russian-backed Assad regime on the liberated north targeting several villages and towns, including: