UPDATED: Russia Unwittingly Verifies Its Airstrikes on A Syrian Hospital 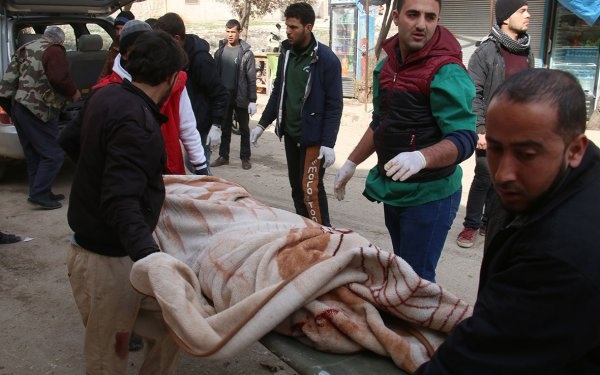 Men carry a body after Russian airstrikes on Azaz in northwest Syria, February 15, 2016

Russia has demolished an underground hospital in Kafr Zita in northern Hama Province in northwest Syria, ensuring that it can never be used again.

The hospital was established in a cave for shelter from Russian attacks, but was damaged in February 2018 by a “bunker buster” bomb.

Northern Hama Province was overrun by a pro-Assad offensive, enabled by Russian airstrikes and special advisors on the ground, in 2019.

Today, the Russian army blew up the Cave field hospital, which was built underground in the town of #KafrZita in the northern #Hama countryside, so that it would not be used again. pic.twitter.com/VCWVANMXN4

ORIGINAL ENTRY, MARCH 1: Russian officials have unwittingly verified their military’s airstrikes on a hospital in northwest Syria in February 2016.

Trying to deny reports of its defective weaponry in last November’s clash between Armenia and Azerbaijan, the Russians released a video which showed its Iskander missiles demolishing the hospital in Azaz in Aleppo Province.

Propping up the Assad regime, Russia has damaged or destroyed most of the medical facilities in the northwest since its massive intervention began in September 2015.

However, the Kremlin has maintained the line that it has never struck a medical center.

From Armenia Allegation to Syria Confirmation

Moscow’s slip-up began with Armenia’s defeat last November in a brief war with Azerbaijan over the territory of Nagorno-Karabakh.

Armenian Prime Minister Nikol Pashinyan, under pressure over the conflict, said that almost all of the the Russian-made Iskander missiles used by the Armenian military failed to explode.

“Maybe it was a weapon of the 80s?” Pashinyan said.

Stung by the criticism, the Russian Defense Ministry put out a video which showed the Iskander missiles exploding in Syria, more than 1,000 miles from Nagorno-Karabakh: “The experience of using them in Syria showed that these missiles are the best in class.”

Geolocation specialists soon established that part of the footage was of the strike on the Azaz hospital.

On February 15, 2016, the Russians targeted four hospitals in northwest Syria, including two hospitals in Azaz, as pro-Assad forces tried to seize opposition territory in Aleppo and Idlib Provinces. About 50 people were slain in the assault.

A strike against the Women and Children’s Hospital in Azaz killed 14 people. The Azaz National Hospital, shown in the Defense Ministry video, was evacuated 10 days before it was attacked.

Russia tried to blame Turkey for the strikes. Kremlin spokesman Dmitry Peskov said of the claims of Russian responsibility, “Those who make such statements are not capable of backing them up with proof”.