Syria Videos and Pictures: Latest Russian Airstrikes on Hospitals and a School 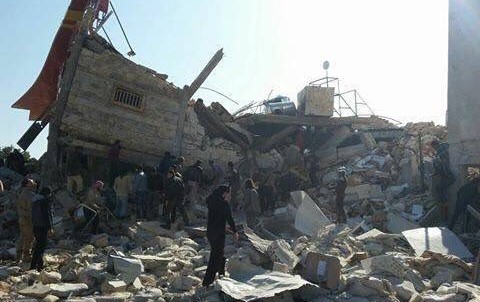 PHOTO: A hospital in Maarat al-Numan in northwest Syria, damaged by a Russian airstrike on Monday

UPDATE 1830 GMT: The toll of hospitals hit by Russian strikes today is now four, with a facility in Anadan in Aleppo Province the latest to be added to the list.

The UN children’s agency UNICEF has condemned the attacks: “Apart from compelling considerations of diplomacy and obligations under International Humanitarian Law, let us remember that these victims are children.”

Since its aerial campaign began on October 7, Russia has destroyed, damaged, and closed dozens of hospitals and clinics across Syria, killing dozens of medical personnel and patients.

The attacks continued on Monday in northwest Syria, with strikes on a three-story hospital in Maarat al-Num’an in Idlib Province. The facility was operated by the international medical charity Medecins Sans Frontieres. Seven people — five patients, a guard, and a caretaker — are dead, and eight staff are missing.

A women’s and children’s hospital and a school, serving as a shelter for displaced Syrians, were hit in Azaz in Aleppo Province. The hospital was run by the French organization Syria Charity:

“First moments after the bombardment. No terrorists, no fighters, only babies”

A medical worker at least 15 people were killed and 40 wounded in the Azaz strikes, near the frontline where the Russian-supported Kurdish militia YPG is attacking rebels. Photographs of slain children and of the Russian-made SS-21 missiles have been posted.

Speaking about the Maarat al-Num’an attack, Massimiliano Rebaudengo, the Medicins Sans Frontiers head of mission, said, “This is a deliberate attack against a health establishment. The destruction of this hospital deprives about 40,000 people of healthcare in this conflict zone.”

The facility had 54 staff and 30 beds. It was hit four times in two sets of two attacks each. A medical worker said staff were evacuating victims of the first strike when the second hit.

Graphic footage has also been posted of an attack, with casualties, on a convoy of trucks.

In an interview with the German magazine Der Spiegel on Monday, Deputy Foreign Minister Gennady Gatilov continued Russia’s denial that it has ever attacked civilian site: “As for the allegations suggesting that we deliver airstrikes on targets other than IS, there is no evidence confirming this.”

Prime Minister Dmitri Medvedev indicated on Saturday, speaking to Time magazine, that Russia will not confine its bombing to the Islamic State and the jihadists of Jabhat al-Nusra, despite international declaration of pursuit of a “cessation of hostilities”:

They are all bandits and terrorists. They move around amongst themselves for various reasons: They get paid more somewhere else, or somebody has a falling out with somebody else. So it is very difficult for us to tell the difference between the very moderate ones and the not-so-moderate ones, the good from the bad.

The Damaged Hospitals and Casualties

Smoke rises from the hospital in Maarat al-Num’an:

Aftermath of the strike: 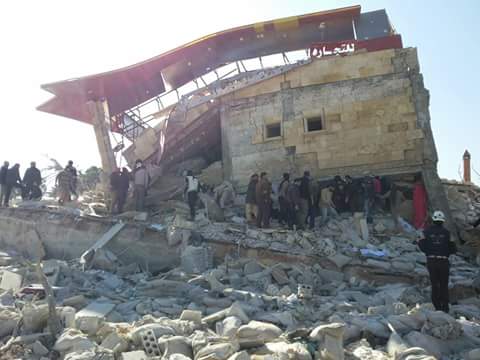 The hand of a victim in the rubble: 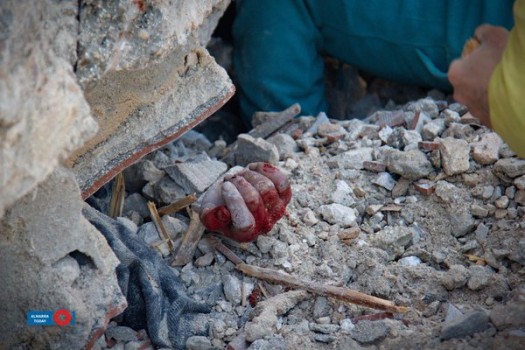 One of the slain hospital staff, doctor’s assistant Ammar Hallak: 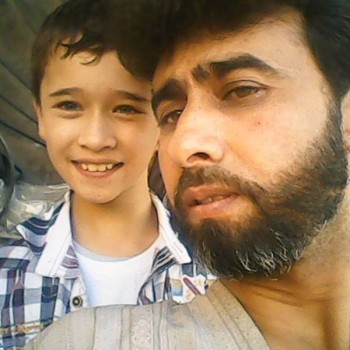 Dr. Abdulrahman Ubeid, killed in an attack on Anadan Hospital: 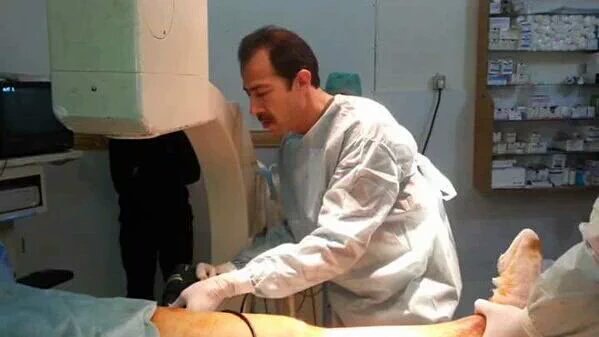 Aftermath of the #Russia|n missile that landed next to the Azaz children's hospital in northern Aleppo earlier today pic.twitter.com/jCHqZibYM2

#Aleppo | Azaz Maternity/Children Hospital is now out of service due to #RuAF bombardment pic.twitter.com/gcYEIC7f3u

A man chants the call to prayer at a destroyed mosque in Hayan, north of Aleppo city: