World Unfiltered: Why We Should Care About Azerbaijan 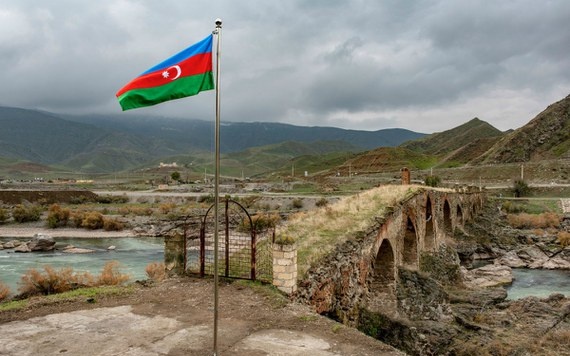 The Azerbaijan national flag at the medieval Khudaferin bridge on the country’s border with Iran, December 9, 2020 (AFP)

In a two-part special, World Unfiltered speaks with top analysts about the pivotal countries of Armenia and Azerbaijan in southwest Asia, three months after the two countries fought in their second war over the territory of Nagorno Karabakh.

What is the state of Azerbaijani politics and society, almost 30 years after independence? Will recent triumph in Nagorno Karabakh give way to political and economic tensions, as well as possible ongoing conflict with Armenia?

Dr. Farid Shafiyev — Chairman of the Center of Analysis of International Relations in Baku and former Azerbaijan Ambassador to Canada — guides me through the issues.

See also World Unfiltered: Why We Should Care About Armenia

1:46: Why should we care about Azerbaijan?

5:15: How does the intersection of a young nation-state with centuries of political culture shape the Azerbaijani approach?

8:40: Is there tension in a system in which one family has held the Presidency for more than 27 years?

12:45: Why has it not been possible since 1988 for an accommodation between Azerbaijan and Armenia over Nagorno Karabakh?

22:20: What constructive steps can be taken to defuse the situation so we don’t wind up with a third Nagorno Karabakh war?

28:02 What is the channel for pursuing a process of negotiation between Azerbaijan and Armenia?

30:20: Can a transport agreement be a confidence building measure this year?

33:30: To what extent is Azerbaijan on a tightrope between Russia, Turkey, and Europe?