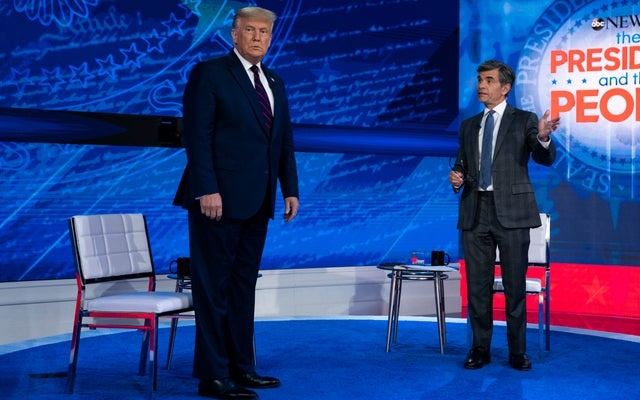 A summary of “a fire hose of lying from the President” in last night’s town hall meeting, from Daniel Dale:

Another tour de force from @ddale8 fact-checking a torrent of lies pic.twitter.com/xDxKI32ef8

ORIGINAL ENTRY: Donald Trump lies again about his denial of the deadly Coronavirus pandemic, telling a town hall audience that he “up-played” the crisis.

Trump’s insistence came days after the revelation that he told journalist Bob Woodward in February and March that Coronavirus was “deadly stuff” but “I wanted to always play [the threat] down. I still like playing it down, because I don’t want to create a panic.”

Trump said in the initial wave of the outbreak that virus deaths would be “close to zero”, that the virus was no worse than common flu, and that the pandemic would “soon disappear”.

But on Tuesday night, he maintained, “Actually, in many ways, I up-played it, in terms of action.”

Trump cited no steps apart from his “ban” on travel from China, which did not cover many entrants into the US, and belatedly from Europe.

When host George Stephanopoulos pointed out, ” There were holes in the ban, and the European ban didn’t come for another month,” Trump effectively acknowledged his misinformation in a garbled reply:

Well, they were Americans. I mean, the holes in…were, if you have somebody in China that’s an American citizen, we had to let them in. I mean, there were actually some people that said, well – once it got going, they said, wait a minute, that is really a heavily infected place.

Q: Why did you downplay coronavirus?

TRUMP: I didn't downplay it. I up-played it

Q: Did you not admit to it yourself?

TRUMP: With China, I put a ban on pic.twitter.com/rVIRnWhKBD

Trump: Virus “Will Go Away”

After his “up-played” declaration, Trump returned to his denials. He also indicated that he is pursuing “herd immunity”, allowing the virus to spread to spread through the population despite the threat.

[The virus] would go away without the vaccine, George. With time it goes away. And you’ll develop like a herd mentality. It’s going to be herd developed, and that’s going to happen. That will all happen.

TRUMP: It is going away

STEPHANOPOULOS: Without a vaccine?

TRUMP: Sure. Over a period of time

S: And many deaths

The Government’s top medical and public health experts, as well as leading models of the crisis, have warned of hundreds of thousands more deaths if social distancing measures are eased.

But Trump has pushed aside the experts, including Dr. Anthony Fauci and Coronavirus Task Force Coordinator Dr. Deborah Birx. His medical confidante is now Dr. Scott Atlas, a Fox TV commentator and neuroradiologist with no experience in epidemiology or public health.

Defying medical guidance, Atlas has loudly promoted Trump’s “reopening” demands, including full in-class instruction at schools and universities, and insisted that there is little risk to youth. Meanwhile, officials at the Department of Health and Human Services have tried to block or alter the weekly mortality reports from the Centers for Disease Control and Prevention.

Trump repeated his lie that the US, with the largest death toll in the world, has an “excess mortality rate [which] is among the best”. When Stephanopoulos noted that “the US has 4% of the population and more than 20% of the deaths”, Trump replied with a non sequitur, “Well, we do much more testing.”

STEPHANOPOULOS: You said we're doing better in mortality than other countries. We're not. Here's a chart

TRUMP: The excess mortality rate is among the best [this isn't true]

T: Well, we do much more testing pic.twitter.com/rSHw1FiuKa

Trump then shredded medical and public health advice by pouring cold water on the wearing of masks, considered essential in the containment of the virus.

“There are people that don’t think masks are good,” he said.

Pressed on who those people are, Trump gave a nonsense response that “waiters” who wear masks spread the virus.

Earlier in the day, Trump again proclaimed that a vaccine will be widely available “within weeks” — before the November 3 elections.

Dr. Fauci again said that while a vaccine may be developed by early 2021, mass distribution is not likely until the end of the year.

Biden: “This Caused People to Die”

Democratic President nominee Joe Biden, who leads Trump in polls, will appear at a town hall meeting on Thursday.

Last week, as Trump’s “downplayed” remarks were made public and the death toll passed 190,000, Biden said the actions were “disgusting” and “almost criminal”.

This caused people to die….

It was all about making sure the stock market didn’t come down, that his wealthy friends didn’t lose any money, and that he could say anything, that in fact anything that happened had nothing to do with him.