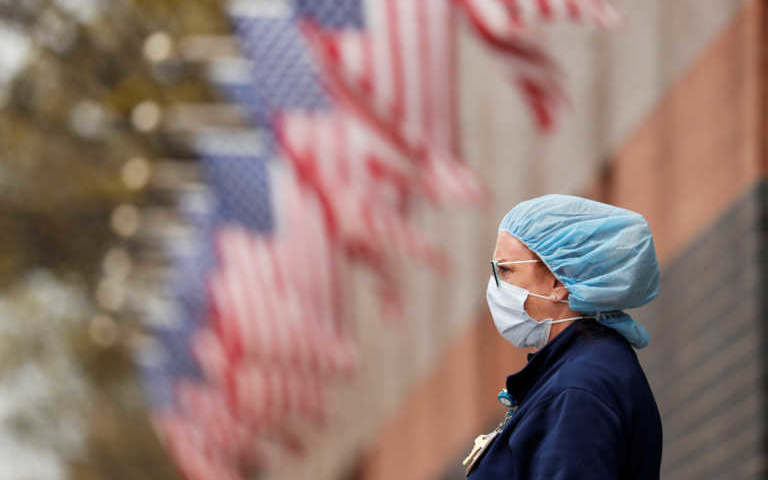 A leading epidemiology model projects more than 410,000 Coronavirus deaths in the US by January 1.

The University of Washington’s Institute for Health Metrics and Evaluation said the toll of 224,000 deaths in four months could be more than halved with near-universal mask use in public.

But it warns that fatalities could be far higher if “herd immunity” — the strategy effectively endorsed by Donald Trump and his most influential medical advisor, the Fox TV commentator and neuroradiologist Dr. Steve Atlas — is pursued.

Herd immunity allows the virus to spread throughout the population, with shielding only of the elderly and most vulnerable, in the belief that mass infection will build up an immunity defeating the virus in the long run.

However, the Washington model concludes, “If a herd immunity strategy is pursued, meaning no further government intervention is taken from now to Jan 1st, the death toll could increase to 620,000.”

It assesses that deaths could be almost 3,000 a day by December, close to that in April and May.

Fauci: “Got to Get Baseline Down”

Dr. Anthony Fauci, the Government expert sidelined by Trump in favor of Atlas, said of the model, “We’ve got to get our baseline back down to a much lower level.”

Fauci supported the use of masks to bring down the current rate of about 40,000 cases per day.

You can actually handle them, get good identification isolation and contact tracing. But when you have an intensity of community spread, it makes it that much more difficult. That’s the reason why I keep saying over and over again we’ve got to be very careful, particularly as we enter this holiday weekend.

Fauci said he is not sure about Trump’s latest declaration that the US is “rounding the corner” on the pandemic. He noted that some states are seeing a reduction in cases, but others are resurging.

Upset at Fauci’s assessments of the pandemic, Trump removed him and Dr. Deborah Birx, the coordinator of the White House Task Force, from White House briefings in late May. Fauci, the director of the National Institute of Allergy and Infectious Diseases, now sees Trump infrequently.

Instead, Trump meets almost daily with Atlas, the doctor who came to his attention with Fox TV appearances supporting Trump’s demand for full “reopening” of the US in defiance of medical and public health guidance.

Trump, beset by a political crisis over his “losers” and “suckers” remarks about US war dead and veterans, made no comment on the pandemic on Saturday. Instead, he played golf.

Put on the defensive by the death toll and revelations about his recommendations for full in-class instruction and complete resumption of university athletics programs — both of which have contributed to a spike in cases — Atlas insisted in an interview with the BBC, “I have never, literally never, advised the President of the United States to pursue a strategy of herd immunity, of opening the doors and letting people get infected.”

But a Trump Administration official said all of Atlas’s policies, including over schools and universities, are part of a herd immunity strategy.

Trump told Fox TV in an interview broadcast on Monday, “We use the word ‘herd’. Once you get to a certain number, it’s going to go away.”

However, at the same time, he brushed aside the projections of a further rise in cases and deaths: “Americans are just assuming there is going to be a second wave of Covid-19, but nobody knows for sure if that will happen. We don’t throw out decades of knowledge about immunology, virology and infectious disease, just because we’re afraid.”

The doctor, with no experience in epidemiology, echoed Trump’s denial of data about the pandemic. He said of the information that the US has the 4th highest per capita death rate in the world: “Simply wrong.”

He said of his qualifications, that “it’s sort of silly” to think “there’s some kind of reason that I would need to be a virologist or an immunologist” for his current White House role.