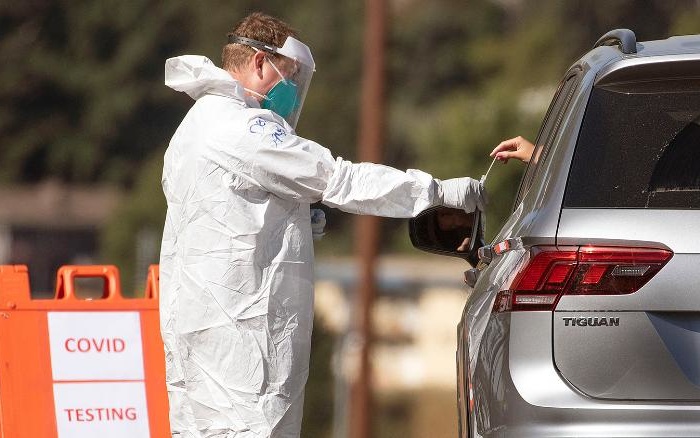 A medic administers a Coronavirus test in Pullman, Washington (CNN)

As the US Coronavirus death toll nears 200,000, Democratic Presidential nominee Joe Biden says it is “disgusting” and “almost criminal” that Donald Trump covered up the threat of the virus.

Meanwhile, a day after revelations that exposed Trump’s months-long proclamations of “almost zero” deaths from a virus “which will soon disappear”, he says the US is “rounding the final turn”.

Biden said in Michigan on Thursday that Trump’s statement to journalist Bob Woodward in March about the “deadly stuff” — I wanted to always play it down” — showed “why we have no confidence in his leadership.”

This caused people to die….

It was all about making sure the stock market didn’t come down, that his wealthy friends didn’t lose any money, and that he could say anything, that in fact anything that happened had nothing to do with him.

Citing Trump’s mismanagement of the crisis, his disinformation, and his undermining of medical and public health guidance, Biden summarized, “He waved a white flag. He walked away. He didn’t do a damn thing. Think about it. Think about what he did not do — it’s almost criminal.”

He said there’s no need for social distancing, don’t bother wearing a mask. He actually went so far as to suggest it was a violation of American freedom to maintain you had to wear a mask. And look what’s happened. Again, 190,000 dead and climbing. And what’s he doing now? He still has not moved. Look at the schools that are not opening.

Biden also spoke of Trump’s derision of the war dead and veterans, and said he “seems to have no conception of what constitutes national security”.

The former Vice President noted that Trump, in his 18 interviews with Woodward, had revealed the existence of a classified nuclear weapons system.

You wonder why people in the intelligence community wondered from the very beginning whether you could share data with him, ’cause they don’t trust him. They don’t trust what he’ll say or do.

Biden also cited a report of Trump’s question if nuclear bombs could be dropped in the middle of hurricanes to dissipate them before landfall, and Trump’s comment last year that the Continental Army “took over the airports” from the British in the American Revolution.

This is the guy who said maybe the way to deal with hurricane is drop a nuclear bomb on them. I mean — seriously, he said it!” Biden said. “I mean, God. Or you know, the problem with the Revolutionary War was they didn’t have enough airports. I mean, I just — it is beyond my comprehension.

Returning to Trump’s “losers” and “suckers” remarks about US troops, Biden mentioned his late son Beau’s service in Kosovo and Iraq:

Trump’s Lie: “Biden is Against Vaccine”

At a quickly-arranged White House appearance, before going to Michigan for an evening rally, Trump put out meaningless and false statistics for his latest claim of success amid the steady rise in US deaths:

In fact, European daily fatalities are miniscule in comparison with those in America.

Trump reiterated his investment in a confirmed vaccine before the November 3 election, but focused more on his demand for reopening of schools and universities, with complete in-class instruction. He put particular emphasis on the resumption of university football games.

The invocation was yet another contrast with the assessment of the Government’s top infectious diseases expert, Dr. Anthony Fauci. He said earlier on Wednesday, “We need to hunker down and get through this fall and winter, because it’s not going to be easy.”

Having sidelined his chief medical experts, such as Drs. Fauci and Deborah Birx, Trump declared, “We continue to follow the science based approach,” as he lied that Biden had “launched a public campaign against the vaccine”.

He tried to defend the sharp contrast between his remarks to Woodward and his public dismissal of the virus: “I don’t want to jump up and down and start screaming, ‘Death! Death!’”

REPORTER: Why did you lie to the American people and why should we trust what you have to say —

TRUMP: That's a terrible question and the phraseology. I didn't lie. What I said, we have to be calm. pic.twitter.com/TZrvRa5fpU