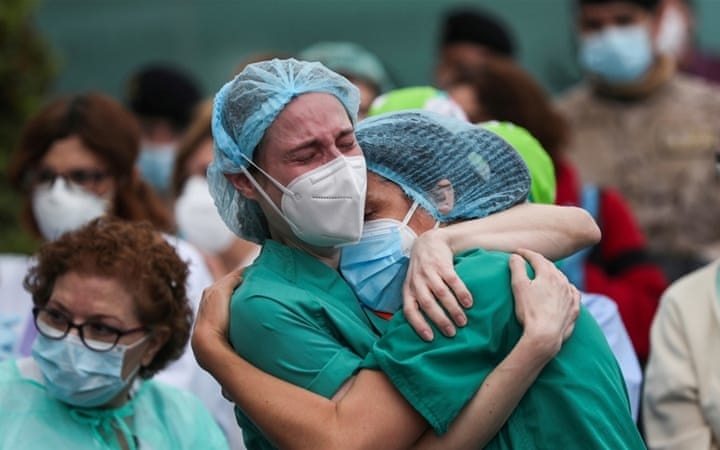 Medics console each other after the death of another Coronavirus patient, April 2020

In a series of interviews with journalist Bob Woodward, Donald Trump said he willfully deceived Americans about the threat from Coronavirus.

And in a crowded day of developments around the pandemic, the Trump-Russia affair, and November’s elections:

*Trump officials tried to shut up Dr. Anthony Fauci, the Government’s top Coronavirus expert, over the dangers to children from the illness

*A senior Homeland Security official said the department manipulated intelligence reports to minimize the threats of Russia’s election interference and of white supremacists. Meanwhile, it exaggerated the threat of “Antifa” and anarchists.

*While criticizing Trump’s mismanagement of Coronavirus, Democratic Presidential nominee Joe Biden gave details of his plans for the US economy.

*Wildfires continue to ravage California, with more than 85 blazes in the Pacific Northwest in the worst season on record.

Trump said in late January, at the start of the Coronavirus outbreak, that the US death toll would be “close to zero”. Throughout February, March, and all the way to September, he has insisted that the virus “will soon disappear”.

But on January 28, National Security Advisor Robert O’Brien informed Trump, “This will be the biggest national security threat you face in your presidency. This is going to be the roughest thing you face.”

O’Brien’s deputy Matthew Pottinger explained that the danger was as great as the Spanish flu pandemic of 1918, which killed about 50 million people around the world.

Ten days later, Trump called Woodward in one of 18 interviews that he gave the journalist for the book.

You just breathe the air and that’s how it’s passed. And so that’s a very tricky one. That’s a very delicate one. It’s also more deadly than even your strenuous flus.

This is deadly stuff.

Trump returned to the topic on March 19, three days after the White House finally issued guidelines over social distancing to contain the virus.

Part of it is the mystery. Part it is the viciousness. You know when it attacks it attacks the lungs. And I don’t know — when people get hit, when they get hit, and now it’s turning out it’s not just old people, Bob.

But he admitted that he was deliberately hiding the reality of the pandemic.

“I wanted to always play [the threat] down,” he said. “I still like playing it down, because I don’t want to create a panic.”

Within days, Trump — worried about the downturn in the stock market as he sought re-election — was trying to remove the White House guidelines and any limits on businesses, demanding a “reopening” of the US economy by Easter, April 12.

Trump on why he picked Easter as the day he wants to end strict social distancing and reopen American businesses: "Easter is a very special day for me … Easter Sunday, and you'll have packed churches all over our country." pic.twitter.com/6cXEtW8LmR

On February 10, three days after telling Woodward of the “deadly stuff”, Trump said on his favored outlet Fox TV:

We’re in very good shape. We have 11 cases. And most of them are getting better very rapidly. I think they will all be better.

Almost two weeks later, he told reporters on the White House South Lawn that “we have it very much under control in this country”.

Days after that, he said in a White House appearance, “It’s a little like the regular flu that we have flu shots for. And we’ll essentially have a flu shot for this in a fairly quick manner.” He told a South Carolina that Coronavirus concerns were the “new hoax” of Democrats.

Trump had given Woodward the assessment of his experts that the mortality rate of Coronavirus could be “5% versus 1% and less than 1%”. But on March 4, he told his friend Sean Hannity on Fox TV that “the number is way under 1%”.

In this clip, Trump:
1. Denies WHO's coronavirus death rate based on “hunch"
2. Calls coronavirus "corona flu"
3. Suggests it's fine for people w/ Covid-19 to go to work
4. Compares coronavirus to "the regular flu," indicating he doesn't get the difference pic.twitter.com/uC9c03zX31

Biden: “A Life and Death Betrayal”

Joe Biden highlighted the cost of Trump’s approach on Wednesday, speaking about the “life and death betrayal” which was a “dereliction of duty” and “a disgrace”:

Biden: "On the day we hit 190k dead in the US because of Covid, we just learned that POTUS admitted on tape in February, he knew [Covid] passed through the air. He knew how deadly it was. He knew & purposely played down. Worse, he lied to the American people … it's a disgrace" pic.twitter.com/iVkK68H7VI

White House Press Secretary Kayleigh McEnany tried to bury the story by lying about it. She defied Trump’s words to Woodward on audiotape and his numerous public statements, saying he never played down the virus.

"The president has never lied to the American public on Covid" — Kaleigh McEnany (Trump in fact said coronavirus would go away on its own without anyone dying 190,000 deaths ago) pic.twitter.com/irsvNEUz7a

Throughout the summer, Trump has demanded that schools fully reopen with complete in-class instruction. He has belittled and pushed aside his Coronavirus experts, Dr. Fauci and Task Force Coordinator Dr. Deborah Birx, replacing them with the Fox commentator and neuroradiologist Dr. Scott Atlas.

Contradicting his March statement to Woodward about the threat to “young people”, Trump — at odds with the assessment from the Centers for Disease Control and Prevention — declared last month that children are “almost immune from this disease”.