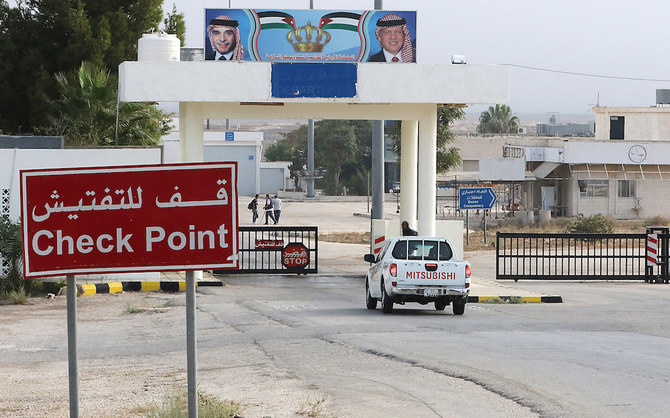 A vehicle arrives at the Nasir-Jaber border crossing between Jordan and Syria as it reopens, September 27, 2020 (Khalil Mazraawi/AFP)

Jordan has reopened its border crossing with Syria after a closure of more than a month, as the Assad regime faces economic crisis and shortages of basic goods and services.

The Nasir-Jaber crossing, which moves billions of dollars in goods each year, is the main transit point for goods from Lebanon and Syria to Gulf States. It was shut down in mid-August, after dozens of cases among border officials amid the spread of coronavirus in Syria.

The Assad regime has declared only 4,072 cases and 192 deaths in areas under its control. Medics, researchers, activists, and residents say only a small fraction of infections and fatalities are being reported.

The Assad regime is desperate for trade amid a 75% loss in GDP during Syria’s 114-month conflict. With tenders for vital goods are unfilled, there are shortages of essentials such as wheat, sugar, and rice. The regime has slashed bread rations for families of less than seven people, and many bakeries have closed.

The regime has also cut fuel subsidies, and there have been long queues at petrol stations. Electricity cutoffs are frequent.

The economic difficulties have been compounded by an extension of US sanctions in June under the Caesar Act over the regime’s crimes against humanity and the deaths of tens of thousands of detainees from executions, torture, and poor conditions.

The European Union has also reaffirmed its sanctions against the regime.