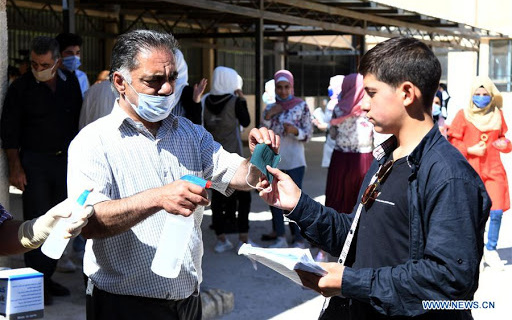 A student receives a face mask before taking an exam in Damascus, capital of Syria, August 13, 2020 (Ammar Safarjalani/Xinhua)

As the Assad regime acknowledges less than 2,200 Coronavirus cases in its areas of Syria, a London School of Economics model forecasts 2 million infections across the country by the end of August.

The regime’s Health Ministry declared 70 new cases on Saturday for a total of 2,143, with one death raising the official toll to 85.

But since the first case was acknowledged in March, medics, activists, and residents have said the toll is far higher.

Medical workers have spoken of overcrowded hospitals and shortages of resources, but with State security officers in medical facilities, the doctors have been warned not to reveal the extent of the outbreak.

See Coronavirus is Worsening in Syria — and Assad Regime is Hiding It
How Widespread is Coronavirus in Regime-Held Parts of Syria?

The virus is also spreading across opposition-held northwest Syria and the Kurdish-held northeast. Both areas face acute shortages of testing kits, equipment, and hospital space, and many of the more than 1 million displaced people in the northwest are in crowded and unhygienic camps.

With more than 6 million Syrian refugees amid a 113-month conflict, the country’s remaining population is estimated at 17.5 million people.

The LSE researchers say there were about 35,000 active cases in Syria at the end of July. They continue:

Currently, a very limited number of containment mitigation measures are in place in Syria. Should this continue to be the case and with low improvement of public commitment, our modelling predicts around 2 million COVID-19 active cases by end of August 2020.

If effective measure were introduced and were accompanied by public commitment, this would take the number of active cases down to about 100,000.

The model estimates an R0 transmission rate of 3, with each infected person spreading the virus to three others. To contain the virus, the target is to bring the rate under 1.

The researchers’ scenario is based on an absence of strict measures by the regime, projecting 119,000 deaths.

The model assesses that with some restrictions limiting the R0 rate to 2, there will be 289,500 cases and about 17,400 deaths. The introduction of effective measures and increased awareness”, bringing the rate to 1, holds down cases to 101,000 and deaths to about 6,100.

In March, the Cabinet imposed some restrictions on businesses and movement, with restriction of travel between provinces and curfews. However, the measure were lifted within weeks amid Syria’s economic crisis.

Last month, the Dean of the Faculty of Medicine at Damascus University, Dr. Nubogh al-Awwa, warned, “The continued recording of advanced infections at this pace will lead to a major problem during the coming period….The virus has become fiercer”.

However, he rejected any renewal of stay-at-home measures and restrictions, “Economic and living conditions do not allow for [this].”

Zaki Mehchy, who led the LSE research teams, counters, “The Syrian government should impose a complete lockdown including the closure of all economic activities except the essential ones.”