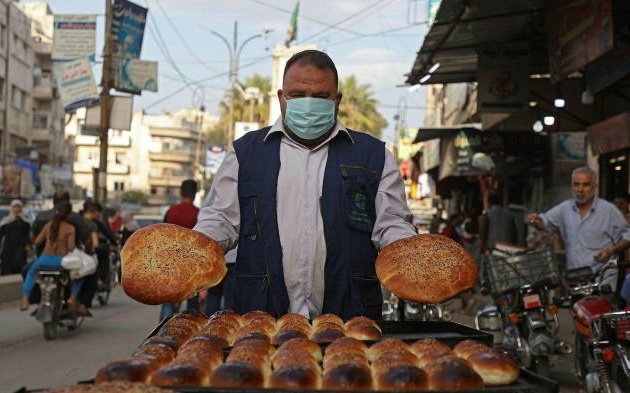 Failing to provide sufficient subsidized food and gasoline in its areas of Syria, the Assad regime has reduced daily family bread rations.

All families had been receiving four packets of subsidized bread.

The regime said the reduction was to “fairly” meet the needs of the people and “prevent the manipulation of bread prices”.

Long-term shortages have been exacerbated by the regime’s failure to fill tenders for imports of wheat, sugar, and rice. Only one of five wheat tenders has been filled, with two extended until mid-September.

Domestic production, which was 4 millions tons per year before the Syrian uprising of March 2011, has fallen to 1.2 million tons. Regime-held areas are estimated to need 1 to 1.5 million tons.

The situation has been compounded by a ban by the Kurdish autonomous administration, which controls much of northeast Syria with the bulk of the country’s wheat production, on sales to other areas.

Queues for subsidized bread have grown in regime areas, with people lining up at bakeries in the capital Damascus and Latakia in western Syria. Many bakeries have been forced to close because of a lack of flour.

The price of an eight-loaf packet of subsidized bread is 50 Syrian pounds. The same packet is sold at 500 pounds on the black market. Meanwhile, the average monthly income of 149,000 pounds is now worth less than $700 after a fall of almost 75% in the value of the Syrian currency.

A teacher complained, “They claim that they are seeking fairness and preventing price manipulation, but the truth is clear to see. The government is seeking to cover its shortcomings at the expense of the people.”

The UN estimates that 87% of people in regime-held territory are now living under the poverty line. The World Food Program said last month that 9.3 million people — more than half of Syria’s population — are “food insecure”, with an additional 2.2 million at risk.

People are also facing lengthy electricity blackouts and shortages of fuel, with the regime reducing the supply of subsidized petrol earlier this summer.

Oil Minister Bassam Touma admitted last week that problems with imports have forced the regime “to reduce distribution of gasoline by 35%”.