The Battle for LGBTQ+ Rights in Post-Communist States 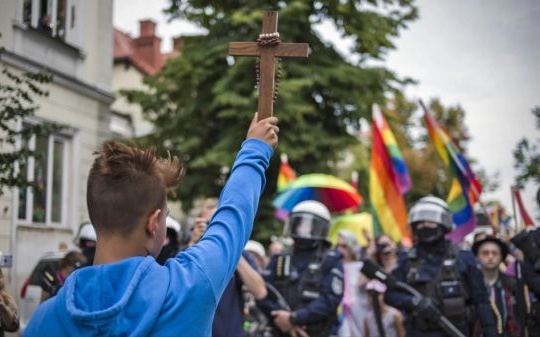 On August 6, Andrzej Duda was sworn in for a second term as President of Poland. His re-election campaign rested on the message that those in the LGBTQ+ community are a threat to the Polish nation. He openly supported the argument that “LGBT is not people, it’s an ideology”.

Poland is not alone in hearing this message. In Belarus, where protests against President Alexander Lukashenko flood the country, the “LGBTQ community faces violence everyday.”.

Over the past decade, post-communist countries across Eurasia have been turning anti-LGBTQ+ rhetoric into a political tool for populist and nationalist agendas. This alarming trend has swept from Russia to Ukraine, from Kazakhstan to Georgia, and has been magnified by COVID-19.

But at this important moment in history, protestors are fighting back against the war on sexuality and gender identity. For as the power of the far-right grows, the future of the LGBTQ+ community hangs in the balance.

Today, although anti-LGBTQ+ sentiment remains a problem across the world, it resides overwhelmingly in Eastern Europe and Central Asia. In Russia and Ukraine, only 14% of the population say that homosexuality should be accepted in society, and the region is voted the most dangerous part of Europe for LGBTQ+ people.

For much of the 20th century, this disparity was not as distinct. Attitudes towards the LGBTQ+ community in the communist bloc did not sway far from those in their Western neighbors. But rather than opening up expression, the collapse of the Soviet Union lay the foundation for homophobia, as repression cloaked itself in a new nationhood. Newly-independent states turned to right-wing nationalism as a means of establishing an identity.

For many of these countries, ethnicity and language became the pillars of a mobilization against minority groups. In Yugoslavia and the Czech Republic, as nationalist movements rose up, so did ethnic violence. In Kazakhstan, champions of nationalism called for a complete halt of non-Kazakhs entering the country.

In some areas, the aim of nationalist agendas shifted. The rise of religion, as well as tensions with the sexually-liberated western Europe, would see right-wing governments turn to the LGBTQ+ community as their new target.

Russia as the Catalyst

Still, during the 2000s, post-Communist states — with the exception of Latvia — were relaxing their laws on LGBTQ+ rights. In 2002, Armenia removed an anti-gay article from its constitution, and in 2003 Kazakhstan allowed transgender people to legally change their status.

Against this seemingly progressive start to the century, one country in the post-communist space was placing increasing pressure on the LGBTQ+ community by 2012. Russian President Vladimir Putin chose the group as the key threat to Russian nationhood, rallying conservative support whilst also demonizing the “effeminate” Europe and its liberal attitudes.

Dr. Richard Mole of University College London argues that it “just took one” example, such as Russia, for factions across Eastern Europe and Central Asia to see homophobia as a tactic to push through far-right agendas.

“Putin kicked it all off,” he summarizes.

Facing protests across the country, the Kremlin drafted the “gay propaganda” law. The narrative of the LGBTQ+ community as the enemy was a means to reclaim control. Proponents such as Vitaly Milonov labeled gay people as “perverted”. The politician said on Russian television that the law was “a declaration of Russia’s moral sovereignty”.

The Calvert Journal assessed, “A trend towards conservatism and the heralding of so-called ‘traditional values’ across the New East has undoubtedly had a punishing effect on the LGBTQ community.”

A Lockdown on LGBTQ+ Rights

Threats against people who are LGBTQ+ have grown aggressively during the Great Shutdown of 2020. During the pandemic, populist states from the post-communist space have used COVID-19 as a distraction from homophobic and transphobic legislative changes.

In May, Hungarian Prime Minister Viktor Orbán pushed through a law prohibiting transgender and intersex people from changing the status on their birth registration. In Kazaksthan, a young gay man, Bekzat Mukashev, having planned to run away from home, was forced to remain with his homophobic parents due to travel restrictions. They allegedly made him undergo brain surgery to “cure” his sexuality.

For transgender or intersex people, the priorities of health facilities during the pandemic have added additional pressure to their lives. In Georgia’s capital Tbilisi, a trans woman set herself on fire in April, protesting the minimal support given to herself and others in the trans community.

Over the past decade, there has been considerable success for right-wing governments taking over public space. In post-communist countries, we are witnessing the biggest clampdown on LGBTQ+ rights in recent history,

However, these governments are far from establishing total control. Across the former Eastern Bloc, many are still fighting for the rights of the LGBTQ+ community.

At Polish President Duda’s swearing-in ceremony, a group of MPs wore the colors of the rainbow in protest against his anti-LGBTQ+ rhetoric. In the Czech Republic, attitudes towards same-sex relationships remain liberal. During this year’s LGBTQ+ march in Russia, thousands joined the #RussianQueerPride initiative online. And in Ukraine, a drone hoisted the rainbow flag onto the tallest statue in Kyiv.

This is a war on identity that is set to continue. Speaking to The Washington Post, Polish citizen Romana Dybalska summarized the moment for many LGBTQ+ people across the post-communist space:

I want to have the same rights as my sister has who lives with her husband. I believe that good times will still come…but at this point I am considering leaving this country.