Isolated in the UN, US Announces New Sanctions v. Iran 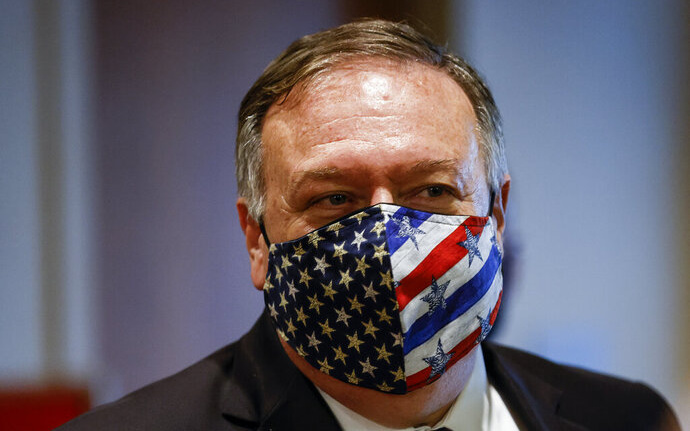 The Trump Administration has announced its sanctions on 27 individuals and entities involved in Iran’s nuclear, missile, and conventional weapons programs.

A statement in the name of Donald Trump castigated both Tehran and other countries, including American allies, “The United States has now restored UN sanctions on Iran. My actions today send a clear message to the Iranian regime and those in the international community who refuse to stand up to Iran.”

Secretary of State Mike Pompeo declared a “new and powerful tool” against any country or firm defying the US over the UN arms embargo on Iran, which expires next month.

“Our actions today are a warning that should be heard worldwide. No matter who you are, if you violate the UN embargo on Iran, you risk sanctions.”

The Iranian entities named in Monday’s sanctions include the Defense Ministry and Armed Forces Logistics, the Defense Industries Organization, and three bodies associated with the Atomic Energy Organization.

Iran’s Ambassador to the UN, Majid Takht Ravanchi, scoffed at the Trump Administration on Twitter:

The US decision today to impose sanctions on Iran has no practical effect; rather, it is a clear sign of desperation after its recent failures at UN which only added to US' isolation.

US will never see the return of terminated resolutions for—in int'l law—they are nonexistent.

ORIGINAL ENTRY, SEPT 21: Isolated in the UN over its comprehensive sanctions, the Trump Administration is announcing new measures against the Islamic Republic.

A “senior US official” said sanctions will be announced on Monday against more than two dozen individual and entities involved in Iran’s nuclear, missile, and conventional arms programs.

The official claimed that Iran could have enough enriched uranium for a nuclear weapon by the end of 2020, and that Tehran has resumed long-range missile co-operation with nuclear-armed North Korea.

He did not provide any evidence for the assertions.

Responding to the comprehensive sanctions imposed by the Trump Administration in November 2018, Iran has broken the limits of the 2015 nuclear deal on stocks of 3.67% enriched uranium, raised enrichment to 4.5%, and installed advanced centrifuges.

However, Tehran has not returned to its pre-2015 level of 20% enrichment. Military nuclear programs require uranium which is enriched to more than 90%.

The US announcement follows its Friday declaration that it is invoking the UN’s “snapback” sanctions, authorized under the 2015 nuclear agreement, for Iranian violations.

But that statement is meaningless. A month ago, when US Secretary of State Mike Pompeo said the US would ask the Security Council for authorization, 13 of 15 Council members rejected the American move within 24 hours.

The members — including long-time US allies such as the UK, France, and Germany — noted that, as the Administration had withdrawn from the agreement in May 2018 — it had no standing to invoke snapback measures.

See US “Snapback” Sanctions on Iran: 13 of 15 Security Council Members Say No

Earlier in the month, the same 13 council members — with only the Dominican Republic giving the US support — rejected an American attempt to extend an arms embargo on Iran, set to expire in October.

Pompeo had blustered that UN sanctions would definitely return on September 20.

With that facade stripped away, he complained to Fox TV on Sunday that European leaders “haven’t lifted a finger” to halt arms sales to Iran.

The US measures, in combination with long-term problems, have crippled Iran’s economy with sagging productivity and employment and a sharp fall in oil exports and non-oil trade.

But President Hassan Rouhani, during Sunday’s live Cabinet meeting on State TV, promised a “decisive response” against the US. He congratulated other countries for standing up to Washington and said the Trump Administration’s effort “has reached its definitive point of failure”.

No one will accept it, and the consequences of such words and such positions will go back to the United States itself.

He declared, “Today we can say the ‘maximum pressure’ of US against the Iranian nation, politically and legally, has turned to ‘maximum isolation’ for the US.”