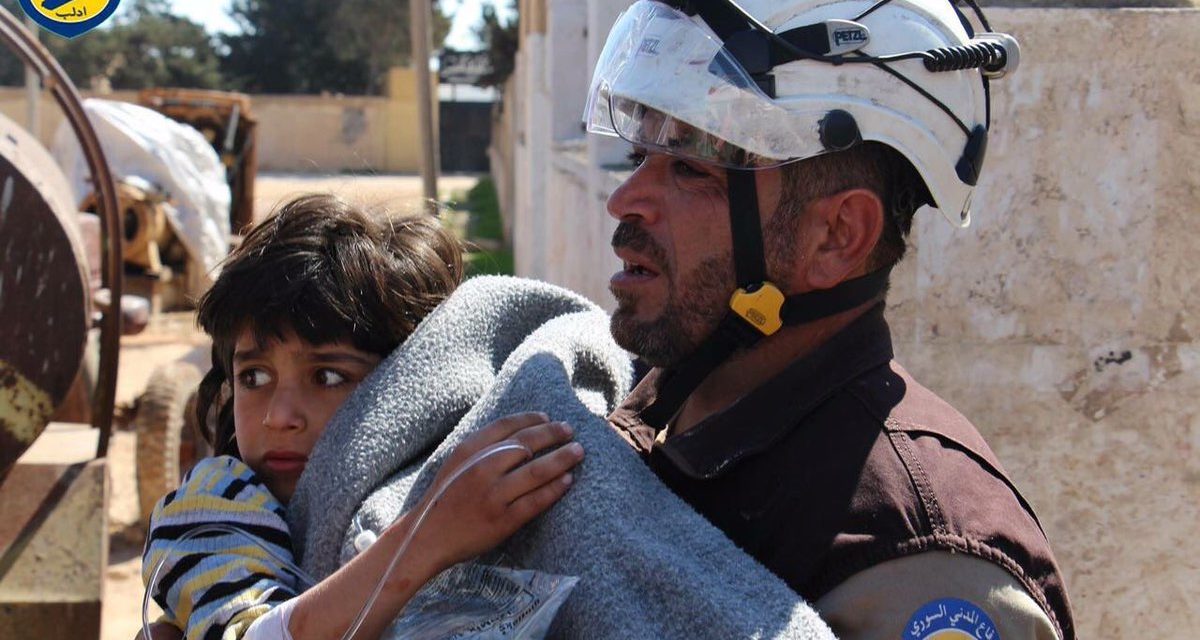 A White Helmets rescuer carries a child away from scene of sarin attack on Khan Sheikhoun in northwest Syria, April 4, 2017

Member states of the Organization for Prohibition of Chemical Weapons have formally condemned Syria’s Assad regime over its sarin and chlorine attacks on civilians in opposition areas.

On Thursday the OPCW’s executive branch voted 29-3, with nine abstentions, to denounce the attacks. It called on the regime to give up its remaining chemical stocks and disband facilities, and sanctioned further investigations of the assaults.

Overriding a sustained propaganda campaign by Russia, the regime, and their supporters, the member states endorsed the conclusions by investigators of regime sarin and chlorine attacks in northwest Syria.

The Council…condemned the use of chemical weapons as reported by the OPCW Investigation and Identification Team (IIT), which concluded that there are reasonable grounds to believe that the Syrian Arab Republic used chemical weapons in Lataminah, Syria in March 2017.

Russia and Iran, the essential backers of the Assad regime since the Syrian uprising began in March 2011, voted No. The only other country joining them was China.

Proud that France led the battle -and won, despite Russia, China and Iran voting against, in OPCW so that the use of chemical weapons by the Syrian regime, which has been documented, doesn’t remain unpunished. Thank you @lvassy for your hard work.#Syria https://t.co/9FS9hGoKyH

Days after the Lataminah attacks, the regime dropped sarin on Khan Sheikhoun in neighboring Idlib Province, killing about 90 people and wounding hundreds.

After sarin attacks that killed at least 1,400 civilians near Damascus in August 2013, the regime declared that it had handed over all chemical stocks and dismantled complexes manufacturing nerve agents and toxins.

The executive branch noted that Damascus tried to block the findings of inspectors over Lataminah, expressing “deep concern that the Syrian Arab Republic did not cooperate with, and provide access to, the IIT”.

The IIT, established in June 2018 over the objections of Russia and the regime, is concluding a report on the regime’s chlorine attack on Douma near Damascus in April 2018. The release of the gas in a building killed 43 people.

The member states gave the regime 90 days to declare “the facilities where the chemical weapons, including precursors, munitions, and devices, used in the 24, 25, and 30 March 2017 attacks were developed, produced, stockpiled, and operationally stored for delivery”.

The OPCW’s full membership, the Conference of States Parties, convenes in late November to consider further action, including the reporting of the regime to the UN Security Council.

UN and OPCW inspectors have found that the Assad regime carried out at least 33 chlorine and sarin attacks on opposition areas of Syria since 2014. But Russia and pro-Assad activists have tried to shield Damascus with propaganda and disinformation campaigns.

With Moscow unable to prevent OPCW member states from creating the IIT, Russia, the Assad regime, and their supporters have vilified the OPCW with more than two years of denunciations. They included the sustained attempt to deny the chlorine attack on Douma.

Douma, the final opposition position in the East Ghouta region, surrendered the next day. Lataminah and Khan Sheikhoun have been overrun by a 10-month Russian-regime offensive in northwest Syria.

In April, both Moscow and Damascus tried to quash the IIT report on Lataminah, which summarized, “Military operations of such a strategic nature as these three attacks only occur pursuant to orders from the highest levels of the Syrian Arab Armed Forces.”

But OPCW Secretary General Fernando Arias stood firm, “It is now up to the Executive Council and the Conference of the States Parties to the Chemical Weapons Convention, the United Nations Secretary-General, and the international community as a whole to take any further action they deem appropriate and necessary.”