Syria Daily: “No One Has a Magic Wand” — Assad Regime Faces Economic Crisis and Sanctions 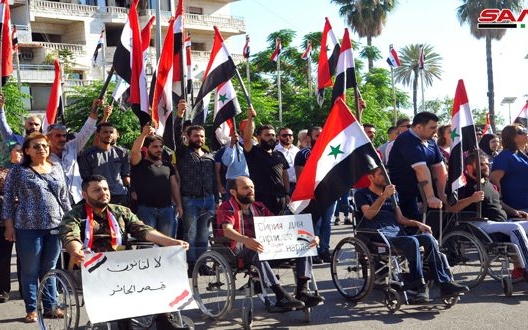 In a rare public admission, Syria’s Assad regime has acknowledged that it is facing an economic crisis compounded by new US sanctions.

Speaking at a Damascus news conference on Tuesday, Foreign Minister Walid al-Muallem denounced the “Caesar Act” sanctions for causing hunger and instability. He then implicitly said that Russia and Iran, who have propped up the regime since the Syrian uprising began in March 2011, had not assured Damascus of steps to mitigate the pressure.

This needs a bit of patience. It’s been a week since Caesar was passed. No one has a magic wand to say Russia has to give this or Iran that.

The sanctions were implemented last week over the regime’s crimes against humanity. They are named after “Caesar”, a defecting military photographer who brought out images of thousands of detainees executed, tortured to death, or perishing from inhumane conditions in regime prisons.

The measures seek to cut off the regime from international financial markets, with punishment of any companies trading with Damascus. They also target the assets of Bashar Assad’s wife Asma, his brother and sister, regime generals, and Iranian-led militia.

Iran has provided the regime with billions of dollars in lines of credit, including for oil supplies, during the 111-month conflict. However, Tehran is facing its own economic crisis and has cut back its assistance. Russia is also struggling, and allies of President Vladimir Putin are expressing concern about Assad’s handling of the political and economic situation.

A regime official responded with the vague declaration that Damascus will try to turn US allies against the sanctions, despite the European Union renewing its own measures against “violent repression” on May 28.

“The resistance axis will work on opening gaps,” the official said.

Meanwhile, Syrian State news agency posted images of another small demonstration organized by the regime to protest the sanctions. The site said the gathering was of the “Disabled Association” and others in front of the governorate building in Lattakia in western Syria.

Syria has lost more than 75% of its GDP since March 2011, and its currency is falling sharply, with an 80% reduction in value since last autumn. Inflation is rampant, and shortages of food, fuel, electricity, and basic goods are widespread.

Kurdish authorities who control of northeast Syria have asked for exemption from the sanctions. US troops, alongside the Kurdish-led Syrian Democratic Forces, support the autonomous area.