Syria Daily: Assad is Annoying Russia — But What Does Putin Do? 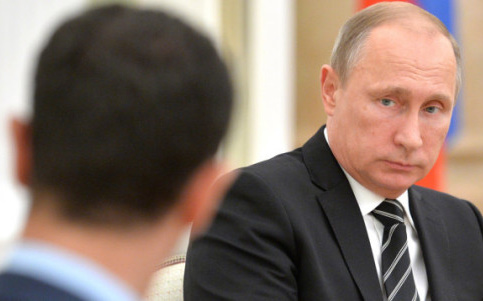 Amid a nine-year conflict, economic crisis, and widespread corruption, Syria’s Bashar al-Assad is becoming an unsolvable problem for Russia.

Russia has been essential to Assad’s stay in power since the start of the Syrian uprising in March 2011. Massive intervention by Moscow’s forces prevented the fall of the regime in 2015, and has enabled pro-Assad offensives to regain much of the country.

But the Kremlin is facing the regime’s resistance to any compromise in talks over a new constitution and realignment of power. There is no sign of any international assistance with reconstruction of an economy which has lost 75% of its GDP and faces widespread shortages of electricity and vital goods.

“Four people familiar with Kremlin deliberations on the matter” said Russian President Vladimir Putin is insisting on “flexibility” by Assad in talks with Syrian groups on a political resolution.

Russian State outlets and publications have signaled Putin’s unease with critical discussions and articles about the regime’s position and activities.

Alexander Shumilin, a former Russian diplomat and head of the State-financed Europe-Middle East Center summarizes, “The Kremlin needs to get rid of the Syrian headache. The problem is with one person — Assad — and his entourage.”

Russia launched an initiative in 2018 for a 150-member committee to draft Syria’s constitution, including representatives from the regime, some opposition groups, and civil society organizations.

The first talks were finally held in October 2019. However, they soon stalled with the regime insisting that its “sovereignty” was paramount and that the first item on the agenda was dealing with “terrorism”.

Alexander Aksenyonok, a former Russian diplomat and Vice-President of the Kremlin-established Russian International Affairs Council, told Bloomberg, “If Assad refuses to accept a new constitution, the Syrian regime will put itself at great risk.”

Corruption and A “Stubborn” Assad

Another signal of Russian discontent came from a media outlet linked to Yevgeny Prigozhin, known as “Putin’s Chef” and the organizer of Russian paramilitary forces who have propped up pro-Assad units on the battlefield.

An online article from the Federal News Agency labeled Assad as corrupt. It cited a poll showing he has just 32% support, and listed potential replacements from within the Syrian regime and the opposition.

The article soon was removed. However, days later, the Russian International Affairs Council published a commentary deriding the regime’s lack of “a far-sighted and flexible approach” to end the conflict.

The Kremlin is concerned at Russian failure to get a stake in the Syrian economy, amid the plutocracy around Assad and competition with Iran, another essential backer of the regime.

A Western diplomat said Russian companies and the Wagner Group, set up by “Putin’s Chef” Prigozhin, are complaining about the absence of revenues, particularly in shares of the oil and gas sectors.

Moscow is also troubled that the failure to provide essential goods, amid the Coronavirus pandemic, and corruption could spark another rising in parts of Syria.

A person “close to the Russian leader” said Putin see Assad as a stubborn figure and a disappointment, using Prigozhin’s media outlet to display this.

But the source and a government official said Assad cannot be abandoned because there is no alternative leader suitable to Moscow. Irina Zvyagelskaya, a Middle East expert at the state-run Institute of World Economy and International Relations, echoed the view of excessive risk from trying to oust Assad.

Responding to the revelations, Kremlin spokesman Dmitry Peskov denied that Putin is unhappy with Assad.

Trouble in the South

Russian concern has been compounded by a series of assassinations in southern Syria, including of two senior army officers and a political official this month.

The attacks are being carried out in Daraa Province, where the Syrian rising began in March 2011.

In March, regime forces attacked Sanamayn in northern Daraa to oust a group of rebels, but the assault failed to check the attacks. At least 31 regime soldiers and militiamen have been assassinated since then, according to analyst Abdullah al-Jabassini.

Aksenyonok, the Vice-President of the Russian International Affairs Council, wrote this month, “It is becoming increasingly obvious that the regime is reluctant or unable to develop a system of government that can mitigate corruption and crime.”

The situation has been worsened by a proxy battle for influence between Moscow and Tehran.

“The competition between Iran and Russia is one of the main reasons behind the instability in Dera’a,” says Haid Haid, a Syrian specialist at the International Centre for the Study of Radicalization at King’s College in London. “Iran’s allies are trying to destabilize areas controlled by Russian-backed factions in order to consolidate their control.”