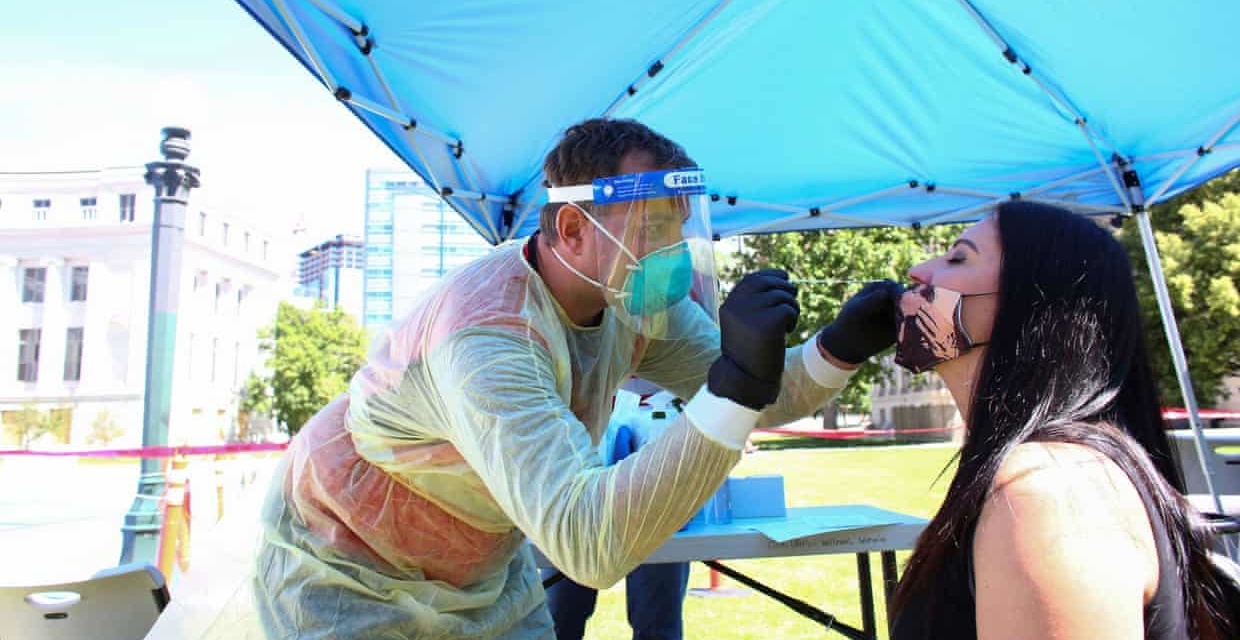 The US sets a daily record for Coronavirus cases, but the Trump Administration plans to close testing sites.

Another 38,672 infections were recorded on Wednesday, bringing the confirmed total to more than 2.38 million.

Almost all states have followed, some of them working in accordance with medical guidance but others — mainly with Trump-allied Republican governors — have proceeded quickly in defiance of the advice.

In Texas, the number of hospitalized patients is more than 4,300, more than double that on June 1. Houston’s intensive-care units are now filled to 97% of capacity, with Coronavirus infections accounting for more than one-quarter of the patients.

Focused on his re-election and the stock market, Trump has denied the surge, saying no tests equal no cases.

He told a rally on Saturday, “I said to my people, ‘Slow the testing down, please.'” White House advisors declared that he was “joking”, but Trump told reporters on Tuesday, “I don’t kid.”

Fulfilling his wish, the Administration began a rollback of funding on Wednesday for 13 testing centers, including in Texas. Republican legislators challenged the decision.

Sen. John Cornyn of Texas, normally a staunch Trump supporter, said, “It’s pretty clear to me, and I think it’s clear to all of us, that with the uptick of cases, now is not a time to retreat from our vigilance in testing.”

A spokesman for Sen. Ted Cruz of Texas said he “has urged and will continue to urge [health officials] to extend the community testing sites in Texas”.

When the President said “slow down the testing,” he meant it.

We are in the middle of a pandemic that’s killed more than 120,000 Americans.

This is absolutely insane.

On Tuesday, four of the White House’s top medical advisors spoke of a resurgence of the virus. Dr. Anthony Fauci, the director of the National Institute of Allergy and Infectious Diseases, rejected Trump’s claim that the rise was due only to testing, citing increased rates of hospitalization and positive tests. He summarized:

The virus is not going to disappear….The next couple of weeks are going to be critical in our ability to address those surges that we are seeing in Florida, in Texas, in Arizona and other states.

Heeding the warning, State leaders in former “hot spots” took precautions. New York, which has suffered almost 32,000 deaths, New Jersey, and Connecticut imposed a quarantine on travelers from states such as Alabama, Florida, and Texas.

Right now, the data is showing that we need to hit the pause button on reopening. But if we all work together and wear face coverings, we can protect our loved ones and get our trends back in the right direction to restore our economy and beat this virus. https://t.co/iW0MuUYGQ8 pic.twitter.com/zOvvELNJmr

Washington Gov. Jay Inslee said, “This is about saving lives. It’s about reopening our businesses. And it’s about showing respect and care for one another.”

Gov. Ron DeSantis, who was feted by Trump for Florida’s rapid reopening of businesses and beaches, urged residents to avoid closed spaces with poor ventilation, crowds, and close contact with others.

However, he offered no indication of any Government action. Instead, he said the rise in infections was because of younger people meeting in bars and homes: “You need to do your part and make sure that you’re not spreading it to people who are going to be more at risk for this.”

Texas Gov. Greg Abbott, another Trump ally who was among the first to roll back measures, told Texans on Tuesday to stay home.

The stock market fell 2.6% over concern about a resurgence checking any economic recovery, with the real rate of unemployment still above 20%.