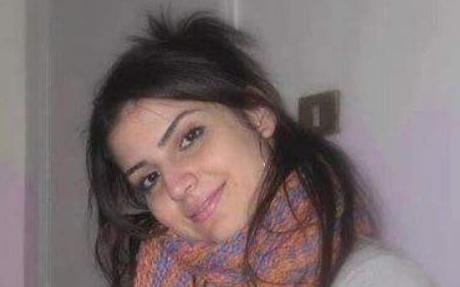 Rehab al-Alawi, detained in January 2013 and killed in an Assad regime prison

Syria’s State TV has been caught using a photo of a young female detainee, tortured and murdered in a regime prison, in a Ramadan drama.

The series An Interview With Mr Adam showed a picture of Rehab al-Alawi, 24, whose death was revealed in 2014. The photo is converted in the drama into that of an Egyptian woman, pregnant by her rich employer’s son, who is murdered by the young man.

Alawi was from Deir ez-Zor in eastern Syria and studying civil engineering in Damascus. Her elder brother Asem was seized and killed by regime security forces soon after the Syrian uprising began in March 2011.

Alawi was arrested in January 2013 by a special military police unit, while she was working for a local coordinating committee in Damascus.

Her mother and siblings were told, by a former cellmate, of her interrogation and torture for around two hours a day. Another ex-detainee said, “She wanted to see her parents. She would always speak about her brothers and sisters. She was scared for her family.”

We did our best to save her life, but we failed. In total, we paid around $150,000 to try and secure Rehab’s release….We sent messages and money to several military officers who promised they would smuggle her to Lebanon.

They told us she was safe but they could not give us any proof. We knew later they took our money and lied.

Her killing was established when her picture was among those of thousands of victims, brought out of Syria by the defecting military police photographer “Caesar” in 2014.

The photo, used in the drama, shows red marks on her chest, her clothing covered in dust from where her body was placed on the ground. Numbers taped on her forehead are a reference for the security services branch which detained her and a falsified document number setting her death in a military hospital.

Tens of thousands of Syrians have been tortured to death, executed, or perished from inhumane conditions in regime prisons since 2011. One regime official put the number of “disappeared” at up to 100,000.

Neither regime officials nor the drama’s director and production company initially responded to the story, which broke on social media on April 28 and was published by Middle East Eye on April 30.

But on Wednesday, State news agency SANA devoted a lengthy article to discrediting an account in The Guardian, published on Monday.

Misleading media campaigns practiced by the Western media since the beginning of terrorist war on Syria is persistent in politics and economy, and now the Syrian drama which is targeted by a systematized misleading campaign.

The article insisted that there was a “volume of difference” of difference between Alawi’s photograph and the one used in An Interview with Adam.

Director Fadi Saleem insisted that the picture was of Tunisian actress after she was “subjected to” face and stomach makeup.

Alawi’s uncle Khalid, based in Germany, said he is considering a lawsuit against Saleem and the production company.

Rehab’s death was heartbreaking, but the most shocking thing was seeing her picture in the series. We all know that Assad is part of everything in Syria: even movies and sports represent the regime. They killed her and now they are changing the facts and falsifying history.