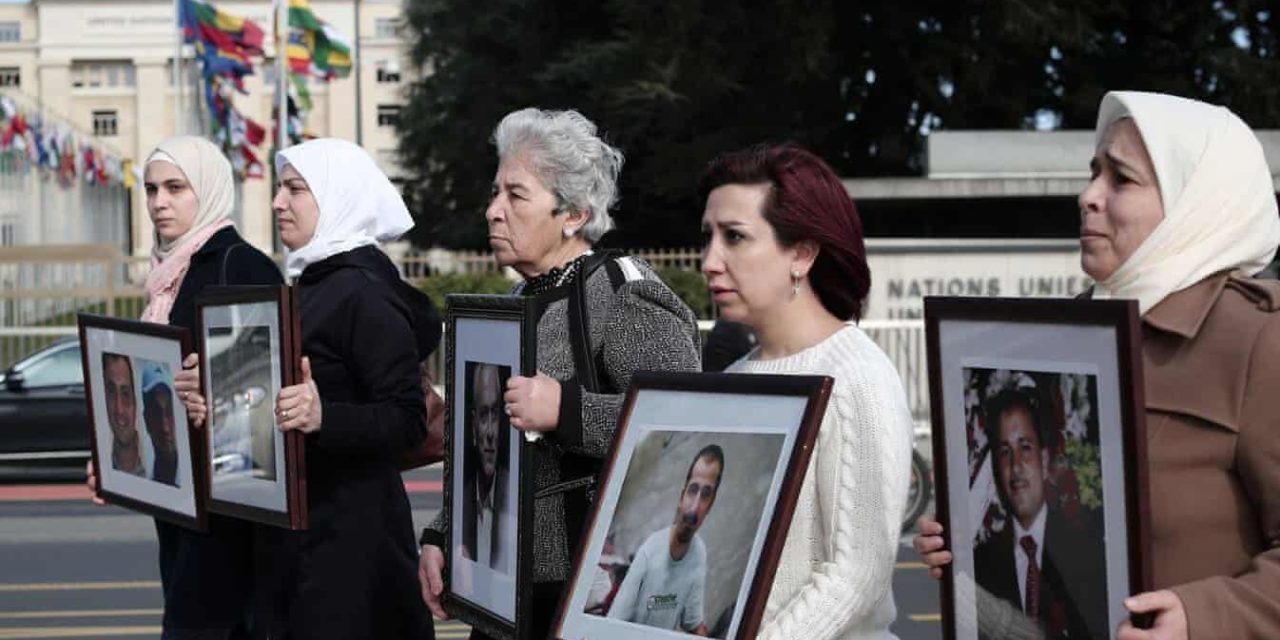 Women hold up photos of relatives detained and “disappeared” by Assad regime in Syria,
outside the Palais des Nations in Geneva, Switzerland (Dylan Collins/Families for Freedom)

More families in Syria have been told of the deaths of thousands of their relatives in Assad regime prisons.

Human rights organizations and activists have compiled evidence of 10,000s who have been killed from torture or executions and who have died from poor conditions. Amnesty International has reported that up to 13,000 detainees were executed in Sednaya Prison near Damascus between the start of the uprising in March 2011 and December 2015, while a defecting military photographer, “Caesar”, has brought out photos of several thousand men who were tortured to death.

The regime began issuing death certificates to families early last year. An official said at least 50,000 would eventually be handed out, and the number could reach 100,000.

Now the activist group Syrians for Truth and Justice has provided further documentation of the extent of the deaths and killings, writing of about 700 notifications in Hama Province alone from January to June 2019.

According to the information attained by STJ’s female field researchers in Hama province, there are about 700 death certificates of detainees, which have been delivered to the Civil Registry Directorate in the city of Hama and its countryside from the beginning of 2019 to the date this report was written in May 2019.

Among the cases are that of “Khalil M.”, a man with a wife and children, who was arrested by personnel of the Military Intelligence Division in a raid of his house in 2011. In early 201, a detainee released from a Damascus prison told Khalil’s family that he was also held there and his health was worsening. In mid-2014, another released detainee said Khalil died from torture and illness. However, the family was not given the death certificate until February 2019 by the Civil Registry Directorate in Hama city.

My brother was arrested due to a fake and malicious security report.

When the regime sent the lists of the deceased detainees to the civil registry directorate, we repeatedly sought it, but we have never got an answer. The last time we went there was early in February 2019, they gave us a death certificate….The document carried March 2012 as the date of his death, which marks a few months into his arrest.

On June 2013, “Samir M.” was arrested in Hama. He was transferred to Sednaya Prison in April 2014, where his family saw him one time after paying a large sum of money to a broker. The family was informed of Samir’s death in February 2019. A relative testifies: upon referring to the civil registry directorate to obtain a civil registration extract. A relative of the victim told STJ the following:

We never expected his death news, as we have always been informed that he was alive. We were paying persons to release him; we were made promises that he would be set free….

His name was reported to the civil registry as dead long ago. But we did not know that until February 2019, even though his death date was registered in the certificate as in 2015.

When receiving the death certificates, families are told that they must not hold funerals. “Otherwise we would be liable to arrest,” one relative says.

The cause of death is often “heart attack”, with families reporting being told that staff do not know where bodies are buried.

A relative speaks of the fate of his brother “Rafat H.”, a married father who was detained in 2014, after the death notification in October 2018:

We tried to conduct a funeral worthy of my brother, and my mother asked the Mu’athen [a person who calls people to prayers] to mourn my brother. The regime’s personnel caught us off guard and broke into the funeral’s location, aboard their vehicles, which they equipped with Dushka machineguns. They yelled at the people, forcing them to leave the funeral and threatening to arrest them. In the end, we had to call off the whole thing, so no one would get hurt.