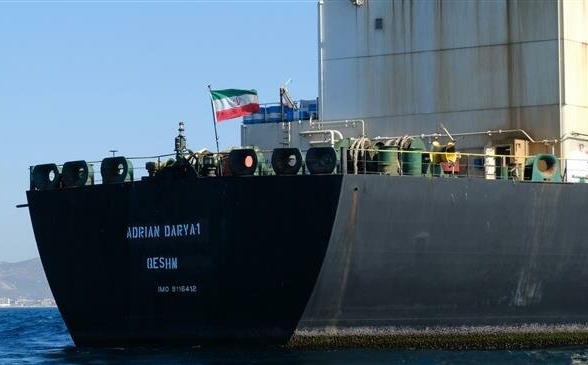 The Iranian supertanker Adrian Darya 1, released by Gibraltar after pledge not to deliver oil to Syria, August 18, 2019

Syria’s Assad regime, propped up by Iran during a nine-year conflict, has surpassed China as Tehran’s oil customer.

Amid economic crisis and shortages of electricity and gas, the regime has imported an average of 84,000 barrels per day since May 2019. Data from Tankertrackers.com indicates record volumes for April, with at least six tankers carrying about 6.8 million barrels (230,000 bpd) toward the Mediterranean port of Baniyas.

With US sanctions choking off Iran’s oil market, Chinese imports have fallen to a historic low of 81,000 bpd. Iran’s total exports to China fell 53% in the first quarter of 2020, compared with the same period last year, to $1.8 billion.

Iran’s oil exports have fallen between 80% and 95% because of Trump Administration sanctions imposed in November 2018. The International Monetary Fund estimates that Iran may be able to export 340,000 bpd this year, compared to 2.5 million bpd in April 2018.

The shortfall has crippled the Iranian Government’s budget, despite an attempt to expand non-oil revenues.

Iran has propped up the Assad regime with billions of dollars in lines of credits, including for oil. Amid Tehran’s economic problems, the credit has been withdrawn.

However, with more than 100 million barrels of unsold oil in storage and with global oil prices at a historic low, Tehran is increasing shipments to Damascus. It is unknown what price, if any, the Islamic Republic is setting.