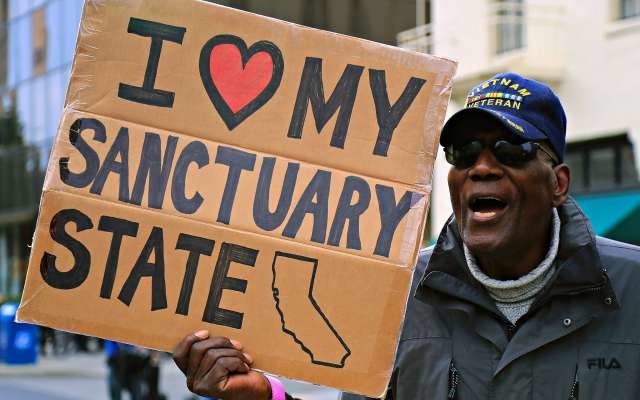 Donald Trump has threatened US cities with no Federal aid, to deal with the effects of Coronavirus, unless they end sanctuary for undocumented immigrants.

Trump issued the statement on Tuesday, as the official numbers of cases in the US passed 1 million and the death toll reached 58,335.

He added the wider threat at a news conference, “We’re not looking to recover 25 years of bad management and give them the money that they lost. That’s unfair to other states.”

Trump signed a $2.2 trillion economic stimulus package on March 30 and a $464 supplemental bill last Friday. However, the initial measure only had $150 billion for states and cities, and Senate Majority Leader Mitch McConnell blocked any assistance in the supplemental measure.

State and local leaders are facing many billions of dollars in budget shortfalls as more than 26 million Americans claimed unemployment in the past five weeks.

Sanctuary cities were established in the 1980s when conflicts in Central America displaced hundreds of thousands of people into the US. They have been magnified since 2017, as the Trump Administration has sought to remove the undocumented and put pressure on legal immigrants to leave America.

Trump said in early March, as he denied a Coronavirus threat, that he would withhold money from the cities after a federal court ruled he could do so.

Last week, trying to divert from his mismanagement, Trump announced a 60-day suspension of all immigration into the US. After criticism from businesses using foreign labor, the order was modified to exclude immigrants entering with particular work permits.

However, Trump’s anti-immigrant advisor Stephen Miller has told supporters that the executive order will be made permanent, enabling his vision of sharp reductions in legal as well as undocumented immigration. He assured, “The most important thing is to turn off the faucet of new immigrant labor.”

We cannot allow the Trump administration to exploit a public health crisis to further their anti-immigrant agenda. https://t.co/JWjbo7el3W

Trump tweeted on Monday, “Why should the people and taxpayers of America be bailing out poorly run states (like Illinois, as example) and cities, in all cases Democrat run and managed, when most of the other states are not looking for bailout help?”

He did not mention states with Republican governors, including Massachusetts (4th in US death toll), Florida (10th), Georgia (11th), and Maryland (12th).

On Tuesday, Florida Governor Ron de Santis, widely criticized for his handling of the crisis, appeared alongside Trump in the White House.

Democratic legislators say they will seek another supplemental bill which includes assistance to states and cities. The National Governors Association is seeking $500 billion.

He modified his position on Tuesday, saying that funding could pass but only if legal liability for businesses and hospitals is limited when they reopen.

Businesses fear that they might be sued by workers who contract Coronavirus after a reopening which is being sought by Trump, in part to boost his chances of re-election.

On Tuesday, Trump issued an executive order that meat processing plants continue to operate despite outbreaks of the virus in some large firms.

Trump declared that the closures of plants “threaten the continued functioning of the national meat and poultry supply chain, undermining critical infrastructure during the national emergency”.

Unions and labor advocates noted that, with at least 20 workers already dead from Coronavirus, the Administration needs to do more to protect staff in refrigerated assembly lines.

Richard Trumka, the AFL-CIO President, wrote on Twitter, “Using executive power to force people back on the job without proper protections is wrong and dangerous….Put worker safety first.”

Thirteen meatpacking and food processing plants have closed at some point in the past two months, reducing pork capacity by 25% and beef capacity by 10%.