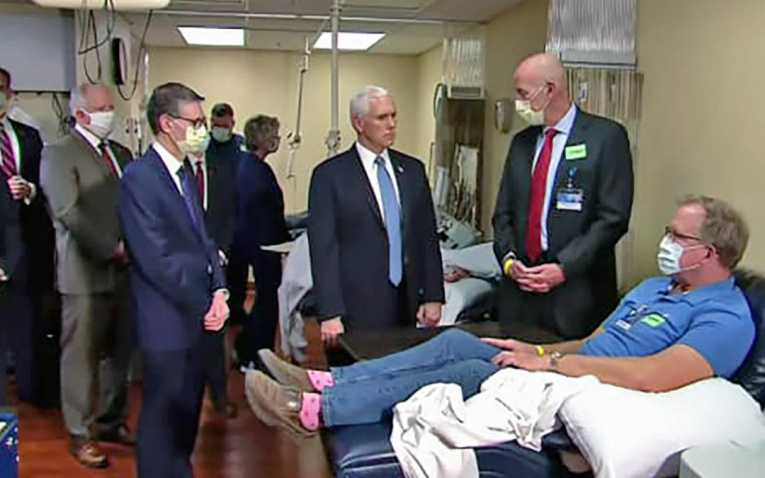 Defying hospital policy to limit Coronavirus, Vice President Mike Pence refuses to wear a mask during a tour of the Mayo Clinic.

Pence saw hospital staff and a patient in a photo opportunity after the Clinic announced a Coronavirus testing “moonshot”.

The Clinic put the mask policy in place on April. A spokesman said, “We made the Vice President and his staff aware of our policy regarding masking.” Masks were offered to the group on Tuesday.

The Clinic noted the guidance after Pence’s visit, before it had to delete the tweet.

Remember when the Mayo Clinic deleted their mask tweet because Pence decided masks were for losers? I remember it, it was today. pic.twitter.com/HV0eSYbWRi

In fact, the CDC has recommended that all Americans wear cloth face masks in public settings where social distancing may be difficult to maintain.

But Donald Trump said on April 3 that he did not have to follow the guidance, “I don’t see it for myself.” Pence has since declined to wear a masks in public appearances, including at the Air Force Academy and a GE Healthcare site.

Food and Drug Administration Commissioner Stephen Hahn, who accompanied Pence, did wear a mask. “He set a good example as a public health official,” said a “senior administration official”.

How would a face mask prevent the vice president from looking people in the eye and saying thank you? https://t.co/zqo1yH4bZa