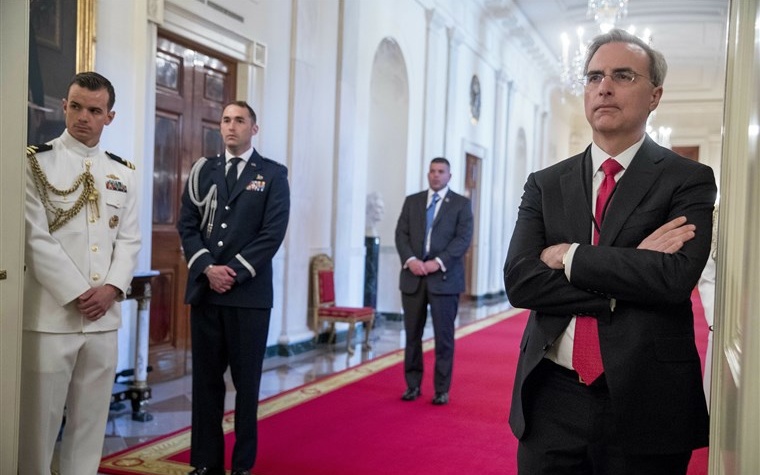 White House Counsel Pat Cipollone (R) at a ceremony in the East Room of the White House, May 22, 2019.(Andrew Harnik/AP)

White House lawyers will not participate in the House Judiciary Committee’s first impeachment hearing on Wednesday.

Instead Donald Trump and his allies will continue their tactic of insisting that the impeachment process has no legitimacy, despite mounting evidence of Trump’s campaign for Ukrainian investigations to tarnish Presidential candidate Joe Biden and to cover up Russia’s involvement in the 2016 US election.

Under the current circumstances, we do not intend to participate in your Wednesday hearing….An invitation to an academic discussion with law professors does not begin to provide the president with any semblance of a fair process.

EA Video Analysis: An 8-Point Guide to The Impeachment of Donald John Trump
EA on CNN: What’s Next in Trump Impeachment; Will Donald Undermine UK Prime Minister Johnson and NATO?

Instead Trump will rely on Committee members such as Jim Jordan, John Ratcliffe, and Matt Gaetz to denounce the hearings. In the House Intelligence Committee hearings that assembled evidence from 17 witnesses in October and November, Jordan was part of an “attack” group of GOP legislators who used their time to assail the current and former US officials, questioning their credibility and even their loyalty to the US.

WH to Judiciary Committee: “Accordingly, under the current circumstances, we do not intend to participate in your Wednesday hearing.”

WH does not rule out future participation, though pic.twitter.com/Oc7GkPk5uZ

The Intelligence Committee is expected to complete its report by Wednesday, when the Judiciary Committee will hear from constitutional experts about what constitutes an impeachable offense and whether Trump’s actions fit the definition.

The Judiciary Committee will then draft articles of impeachment, which are expected to include “bribery” over the months-long campaign by Trump and his attorney Rudy Giuliani, described by the US officials as an “irregular channel” of foreign policy that jeopardized American and Ukrainian national security.

A vote on the articles is expected in time for the full House to consider impeachment in the week beginning December 16.

Nadler asked Trump to indicate by Sunday whether he or a White House attorney would attend Wednesday’s hearing. The Committee chair has set a Friday deadline for the White House to provide any documents or a list of witnesses whom it wishes to testify.

Before the White House letter was sent, Democrat Rep. Val Demings, a member of both the Judiciary and Intelligence Committees, said in a televised interview:

Ignoring Nadler’s request to the White House, the ranking Republican on the Committee, Rep. Doug Collins, said in a Sunday TV interview:

Hoping to divert the focus of the inquiry, Collins is demanding that the first witness is the House Intelligence Committee chair, Rep. Adam Schiff. Trump and his allies have assailed “Shifty Schiff” in the hope of tearing down the inquiry.

It is too late to cure the profound procedural deficiencies that have tainted this entire inquiry. We cannot fairly be expected to participate in a hearing while the witnesses are yet to be named and while it remains unclear whether the Judiciary Committee will afford the President a fair process through additional hearings.