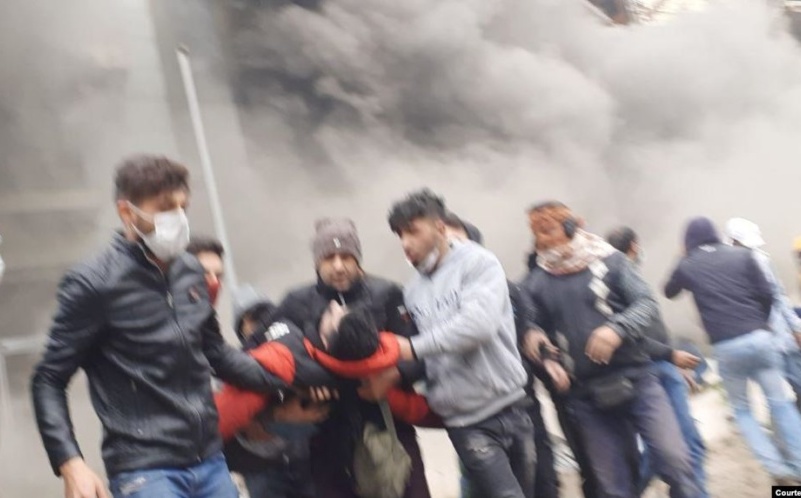 Breaking through the Iran regime’s attempt to limit news of its suppression of mass protests, The Guardian uses witnesses and social media to document scores of killings in Shiraz in the center of the country.

The protests erupted on November 15 after the Government’s midnight announcement of a rise in petrol prices between 50% and 200%. Over the next three days, security forces confronted the demonstrations as some protesters set fire to banks — targeted because of anger over corruption and the economic situation — and Government buildings.

Amnesty International has reported that at least 161 people have been slain, warning that the actual toll may be far higher. The opposition Green Movement’s site Kalameh says at least 366 demonstrators have been killed.

As it tried to quell the protests, the regime cut off 95% of the Internet. Authorities have reportedly refused to return bodies to families, who have been warned not to speak to media.

Despite the measures, accounts have begun to come out of Iran. Opposition activist Masih Alinejad says she received 500 videos in five days, and multiple outlets have reported on victims such as Pooya Bakhtiari, shot in the head by security forces on October 16.

From Civil Disobedience to Bloodshed

The Guardian reconstructs the protests in Shiraz, a city of more than 1.5 million. By Saturday morning, hours after the announcement from the heads of Government branches — President Hassan Rouhani, Parliament Speaker Ali Larijani, and judiciary head Ebrahim Raisi — residents were engaging in civil disobedience. Drivers parked their cars in the middle of roads.

Demonstrators handed flowers to police in riot gear. People sat in groups on the road, chanting and playing cards.

A protester told Alinejad, “Everything was going well and people were all smiling and happy. I saw people giving roses to the police, the first days was very peaceful and it was all good. Even the police were fine.”

But as the rallies spread throughout Shiraz and its suburbs, security personnel began charging through the crowd and firing tear gas. Shops were gutted and burnt.

The protester said to Alinejad, “Things started to escalate when the police started to beat people up. We had to make our weapons to defend ourselves and that was it. It was all because we had to defend our lives.”

By Sunday, violence was reported in six areas. Security forces fired on protesters, and a police building was attacked and burnt on Saturday night after Mehdi Nekouyee, 20, was shot dead.

We asked the people who were burning things [to stop], we don’t know who they are, but people are full of rage and no one could stop them.

It is really bad and everyone is running for their lives, and the armed forces have no mercy and I couldn’t believe they were people from the same homeland.

Activists and witnesses estimate the death toll at about 70 across Shiraz and the suburbs. About 80 bank branches and seven petrol stations have been burnt. Arrests continue, with raids on home and even hospital wards.

Another of Alinejad’s sources summarizes:

For two days Shiraz was under the control of the people, but nothing bad happened. There was complete peace. It was such a great thing that people had the control over the city. I could see how the country would look like if we take power.