Syria Daily: 11 More, Including Children and Rescuer, Killed by Assad Bombing on Idlib 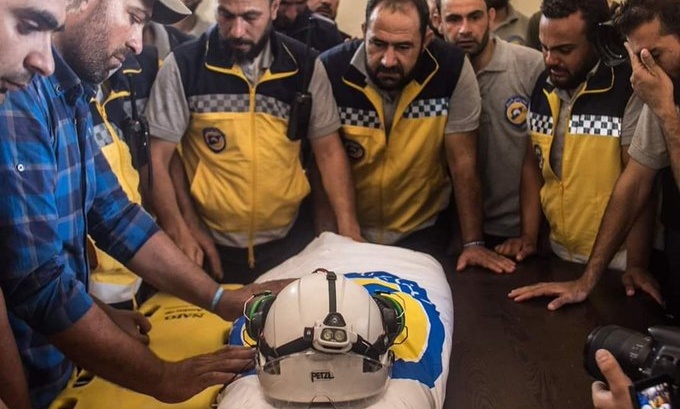 Another 11 civilians, including children and a White Helmets rescuer, were killed by Assad regime bombing of Idlib Province in northwest Syria on Sunday.

Rescuer Anas al-Diab was among those slain in the ongoing assault on Khan Sheikhoun in southern Idlib, on the M5 highway between Aleppo and Homs.

Khan Sheikhoun, the site of a deadly Assad regime sarin attack in April 2017, has been bombarded steadily since Friday.

In Urum al-Jawz in western Idlib, six people were killed. Four, including two children, perished in raids on Kfarouma in the south.

Here are some more details about Anas Diab, a 22-year-old freelance journalist and rescuer with the White Helmets, who died in fresh air raids on Syria's Idlibpic.twitter.com/I5pHU50raO

The White Helmets paid tribute to Diab, who also documented the pro-Assad attacks and the organization’s rescue and recovery of civilians. He was buried in Idlib city, since the bombing prevented any funeral in his hometown of Khan Sheikhoun.

Anas has filled tens of hearts with love and compassion, and those who knew or worked with him will be always grateful for his dedication and kindness.
You will be missed …Anas. #Syria pic.twitter.com/2OiY6zgjbn

Russian-regime attacks have killed at least 620 civilians, including more than 150 children, in Idlib since late April. More than 2,100 people have been injured, and at least 330,000 of Idlib and northern Hama’s 3 million population — about 20% of those remaining in Syria — have been displaced.

At least 250 White Helmets rescuers have been killed, most of them by Russian and regime bombing, since the organization was formed in 2013 to provide rescue and recovery services in opposition areas of Syria.