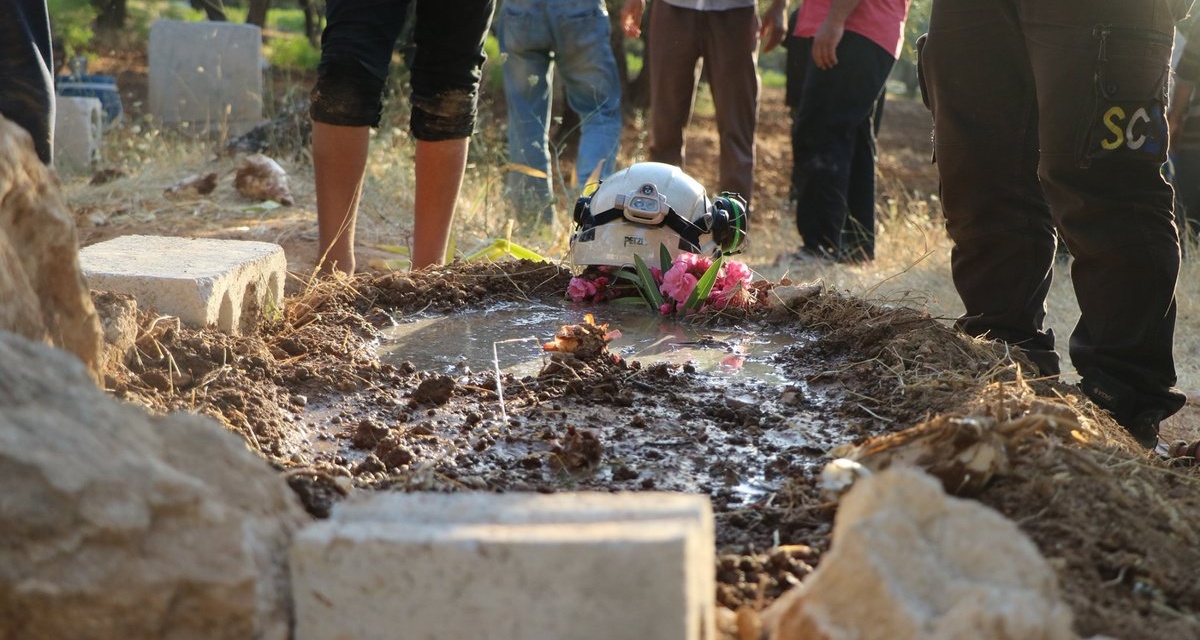 Two White Helmets rescuers are buried in Idlib Province, Syria, after they were reportedly killed by a Russian “double-tap” attack, June 26, 2019

The video follows the White Helmets on a rescue operation in Hish in Idlib Province. An ambulance driver, Mohammed Al-Shaw’wa, is mortally wounded in the second strike, but other volunteers have to leave him in the road as another warplane threatens an attack. Finally, but to no avail, al-Shaw’wa, is taken to a hospital almost 20 miles away, amid yet another nearby strike.

Channel 4 carefully assembles and evaluates the footage from the White Helmets and from a citizen journalist, not only of the slain rescuer but of civilians killed in other Russian-regime bombings.

In one of the most recent attacks, two rescuers were killed and five wounded by the strike on June 26 on Khan Sheikhoun in Idlib Province. Warplanes carried out a second attack as people were responding to help victims of the first.

The White Helmets volunteers were in an ambulance hit by the follow-up bombing. Two hours were needed to evacuate the victims because of sustained bombardment.

The White Helmets said in a statement:

A thorough examination of evidence, such as eyewitnesses and the identification of the munitions used in the attack,…has conclusively proven that the aircraft that committed today’s crime of targeting and killing our volunteers belonged to the Russian Air Force.

A week earlier, three rescuers from the Violet Organization and their patient were killed in a strike on their ambulance in the town of Ma’arat al-Num’an.

More than 250 rescuers have been killed, many of them by the double-tap strikes, since the White Helmets were formed in 2013 to provide rescue and recovery services in opposition areas of Syria.

The bombing has included attacks on 34 medical facilities.