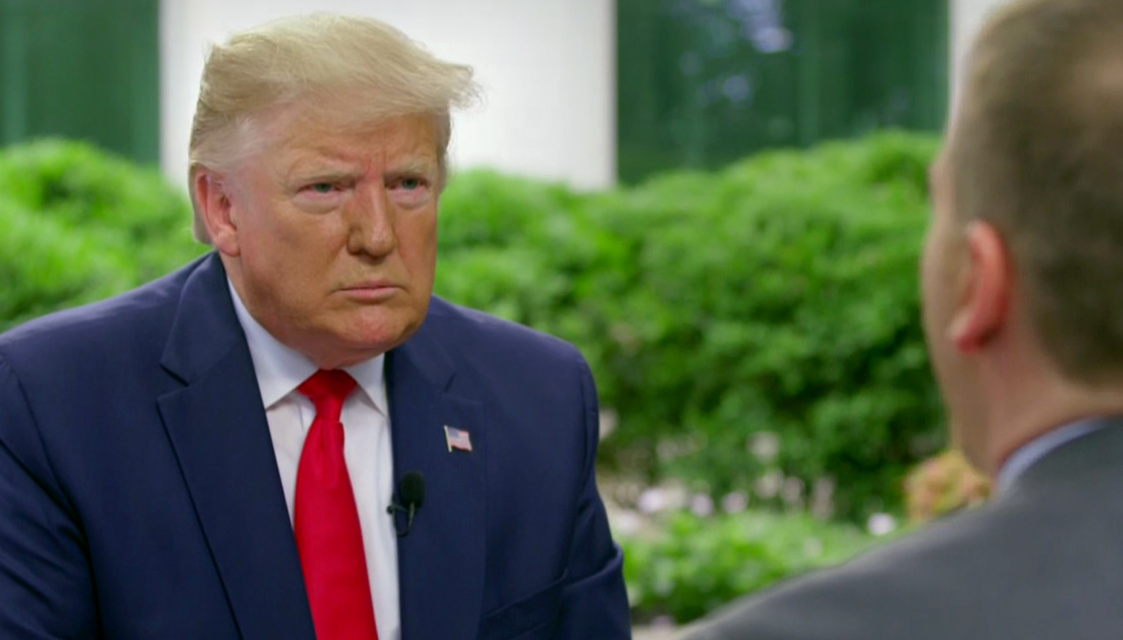 Donald Trump in an interview with NBC News’s Meet the Press, June 21, 2019

Facing criticism over his flip-flop on US military action inside Iran, Donald Trump creates a series of reasons for his approval and then veto of strikes after the Iranians downed an American drone.

Trump authorized the strikes on Thursday evening after a series of meetings with national security advisors, despite the Pentagon’s caution that the strikes might lead to an escalation threatening US troops.

But he reversed the decision as warplanes were in the air and ships were moving into position for a pre-dawn attack.

There was no clear reason for Trump’s U-turn, leading to criticism and speculation, including from GOP legislators. So on Friday, Trump tweeted an explanation that he had halted operations when a general told him that the strikes were estimated to kill 150 people — “not proportionate to shooting down an unmanned drone”.

See EA on Monocle 24: Inside Trump’s Head — Why He Vetoed US Airstrikes
Iran Daily, June 21: Trump Vetoes Military Response After US Drone Downed

Trump did not explain why he did not know of the casualty estimate before he approved the strikes.

Instead, he put out a series of dubious assertions. He said that the warplanes had not taken off when he countermanded his approval, a statement disputed by “two senior US officials” who said the aircraft were headed toward targets in Iran.

Returning to an emphasis on “maximum pressure” on Iran’s economy, Trump falsely said that “new” US sanctions were imposed on Thursday night on Tehran.

There were clues on Friday that Trump — as with his shifting position on North Korea — had again created a crisis to then give the impression that he was the savior of the situation.

“A person familiar with Trump’s thinking” said Trump was pleased with Thursday night’s events because he liked the “command” of approving the strikes and then the decisiveness of aborting them.

Iran added to the story with the claim that Trump sent an overnight message, through Oman, that a US attack on Iran was imminent but that he wanted to initiate discussions.

Having withdrawn from the 2015 nuclear agreement between Iran and the 5+1 Powers (US, UK, France, Russia, China, and Russia) and imposed comprehensive sanctions from November, Trump has alternated between harsh rhetoric and steps back from military confrontation.

On Monday, Trump said attacks on shipping — including last week’s explosions disabling two tankers in the Gulf of Oman, near the Strait of Hormuz — “very minor incidents” and that Tehran was becoming less hostile in its rhetoric towards the US. On Thursday, he said of the downing of the US drone, “Probably Iran made a mistake….I find it hard to believe it was intentional.”

In a Friday interview, to be broadcast on Sunday, Trump said:

I thought about it for a second and I said, ‘You know what? They shot down an unmanned drone, plane, whatever you want to call it. And here we are, sitting with 150 dead people that would have taken place probably within a half an hour after I said go ahead. And I didn’t like it.

A “senior Trump administration official” added another layer to the explanations with the revelation of concern that the US drone, another American surveillance aircraft, and/or P-8A manned reconnaissance plane did violate Iranian airspace at some point. The official said the doubt was one of the reasons why strikes were aborted.

The official US position is that the Iranians downed the RQ-4 Global Hawk drone — one of only four prototypes flown by the US Navy — over the international waters of the Strait of Hormuz.

Another account came from an administration official who — contrary to Trump’s assertion that “a general” told him of the possible 150 casualties — said the estimate came from Pentagon lawyers drafting worst-case scenarios.

The official said the estimate did not account for the strike being carried out before sunrise, when fewer people would be present at the targeted sites.

That estimate was passed to White House Counsel Pat Cipollone, without being cleared with Acting Defense Secretary Patrick Shanahan or the head of the Joint Chiefs of Staff, General Joseph Dunford. It was conveyed to Trump by White House lawyers, at which point Trump changed his mind and called off the strike.