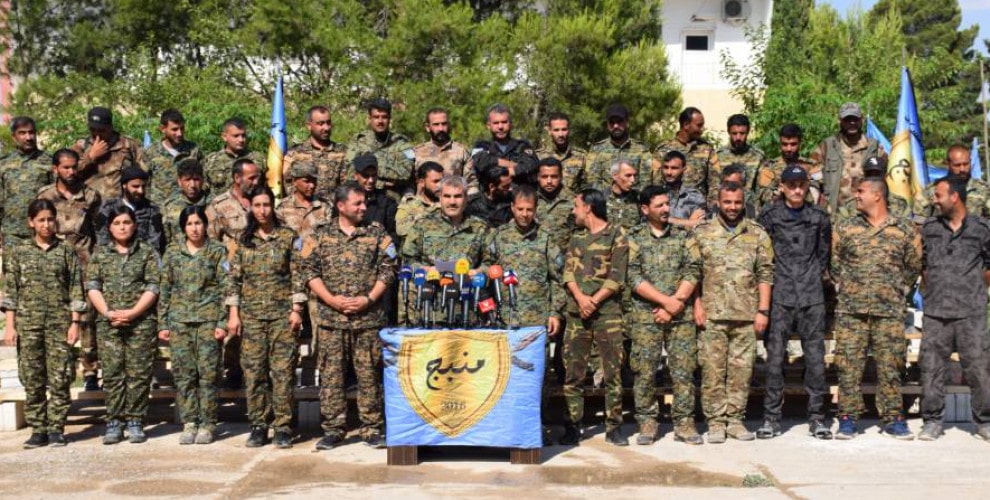 Fearing a Turkish-rebel offensive, Syrian Kurdish factions have invited the Assad regime’s military into the town of Manbij in northern Syria.

The regime’s General Command said that it had responded to “calls of locals” to assume “its responsibilities to impose sovereignty to each inch of the Syrian territories”, raising the regime flag over Manbij.

According to BBC journalist Riam Dalati, a regime military delegation entered Manbij for talks with the Kurdish-led Syrian Democratic Forces. There is no widescale deployment of regime units in the town; instead, the priority is to establish them west of Manbij to act as a buffer against Turkish troops and Syria rebels.

Meanwhile, Russia is reportedly preparing three outposts outside the town, and US forces have yet to withdraw from positions to the northeast.

Source tells @leventkemaI #SDF escorted #SAA and media delegation in #Manbij for filming purposes. Troops have not taken over city yet. https://t.co/DkmEiHc9mB

The Kremlin quickly welcomed the regime entry into Manbij. Spokesman Dmitry Peskov said, “Of course, this will help in stabilizing the situation. The enlargement of the zone under the control of government forces…is without doubt a positive trend.”

The US-supported SDF took Manbij from the Islamic State in August 2016. The mainly-Arab town in Aleppo Province is at the western edge of the 27% of Syria held by Kurdish factions, notably the Syrian Kurdish Democratic Party (PYD) and its YPG militia.

The situation around Manbij and across northern Syria has turned quickly since Donald Trump announced on December 19 that he is ordering the withdrawal of all 2,000 US personnel from the country.

Since early June, Turkey and US have maintained a tenuous agreement to oversee Manbij. However, Ankara has been increasingly vocal that Washington has not forced the withdrawal of the YPG, which it considers part of the Turkish Kurdish insurgency PKK.

Turkish President Recep Tayyip Erdoğan has pledged an offensive to “erase” YPG “terrorists”. Since Trump’s announcement, the Turkish-rebel force controlling northwest Syria has moved troops and equipment to a frontline near Manbij.

Meanwhile, Kurdish groups invited regime units into the nearby village of Arimah.