Syria Daily: US Tries to Deny Deadly Attack on Mosque 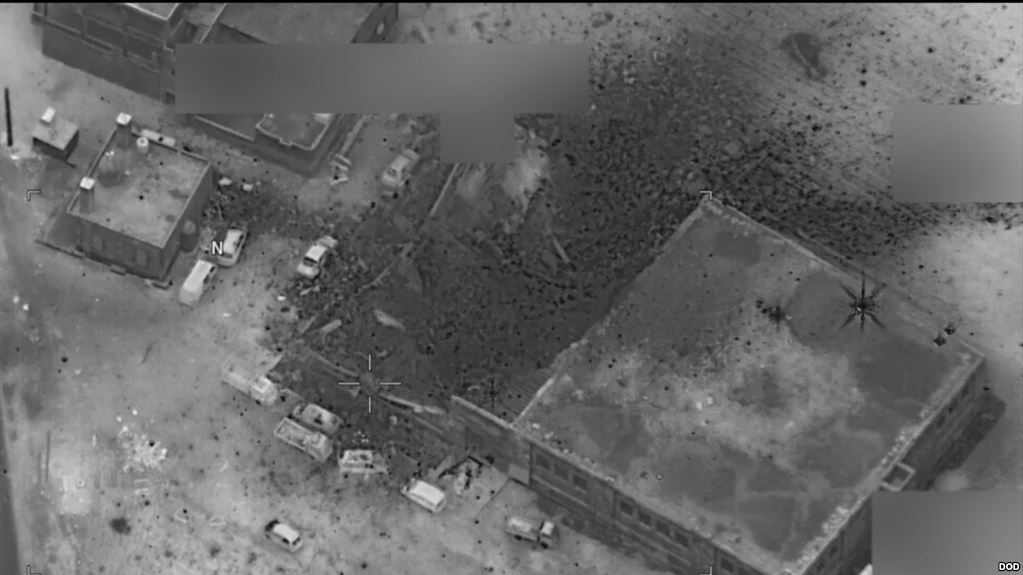 US says it bombed “Al Qa’eda meeting”; locals say it is new, large annex to mosque

Photos: The Removal of the People of al-Wa’er

The US military has tried to deny that its warplanes struck a mosque in western Aleppo Province in Syria, killing more than 40 people on Thursday.

The Pentagon showed an aerial image and claimed that it showed the al-Khattab mosque in the village of al-Jina was intact, with the destroyed building across the street.

However, local sources quickly pointed out the “building across the street” was a new, larger annex to the old mosque. Videos from journalists also the damage, with a black sign at the entrance identifying the annex as part of the mosque complex. Local people said the building was used as an assembly and dining hall.

See 40+ Killed in US Airstrikes on Mosque in NW Syria

In a later statement, the Pentagon asserted that the building was a “partially constructed community meeting hall” used by “Al Qa’eda leaders…as a place to educate and indoctrinate” fighters.

Pentagon spokesman Captain Jeff Davis said he believed “dozens of Al Qa’eda fighters” were killed, and declared that he U.S. military had not yet seen any credible allegations of civilian casualties.

“We struck a meeting of senior al Qaeda terrorists, some of these were likely high value individuals, we’re currently assessing that,” Davis said.

US manned and unmanned aircraft fired four Hellfire missiles, then a 500-lb. bomb, on the new mosque as about 300 people were gathered for evening prayers. Some estimates put the death toll at 75.

The Bellingcat site posts an investigation of the satellite imagery, photos, and videos of the attacked site and the remnants of one of the US missiles.

Russia, which has previously criticized US bombing inside Syria, came to the defense of the Americans. Foreign Ministry spokeswoman Maria Zakharova said:

The airstrike…targeted a building located across the street from the mosque, where al-Qaeda members usually held meetings….

Of course, there should be a probe into what happened in al-Jina in order to figure out what target was hit and who are the victims that the so-called witnesses are talking about. However, we don’t have any doubts that the US airstrikes targeted terrorists.

In contrast, Turkey’s Deputy Prime Minister Numan Kurtulmuş said, “This is a crime against humanity, this is a war crime. Bombing civilians, people in the mosque, and a house of worship is unacceptable.”

SAMS is treating more than 25 victims of yesterday's attack in Al-Atareb, aged 6-70. More than 74 civilians were killed in the attack. pic.twitter.com/Fvw9fhR741

Rescuers pull a child from the rubble:

#Aleppo: A #Syria|n child was pulled alive from the rubble of the destroyed mosque after #US airstrikes last night. pic.twitter.com/FMtWmbQr6q

The US has targeted the jihadist Jabhat al-Nusra, now part of the Hay’at Tahrir al-Sham bloc, since Washington began airstrikes in Syria in September 2014. The Americans have expanded the attacks in recent months, also hitting members of other factions.

Thursday’s toll would be the second-largest from an American strike in Syria. On January 19, more than 100 fighters from Jabhat Fatah al-Sham (formerly Nusra) and an allied group were killed in an attack on a camp in Idlib Province.

The first group of about 1,500 people is being removed from al-Wa’er, the last opposition district in Homs.

Rebels, their families, and other civilians are being transferred from the area, which still has about 50,000 residents, to Idlib Province and to Jarablus on the Turkish border.

Now see Syria Photos: The Removal of the People of al-Wa’er