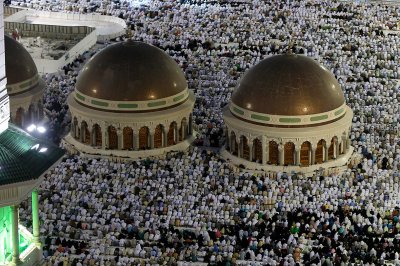 In a breakthrough which could signal an easing of tensions, Iran and Saudi Arabia say they have reached an agreement for the return of Iranian pilgrims to the hajj to Mecca.

Iran’s Hajj and Pilgrimage Organization said the deal was reached after the Saudis assured the “security, dignity, and honor of Iranian pilgrims” and the provision of essential services. It said more than 85,000 Iranians will now go to Mecca.

The official Saudi Press Agency said, “The Ministry of Hajj and the Iranian organisation have completed all the necessary measures to ensure Iranian pilgrims perform hajj 1438 according to the procedures followed by all Muslim countries.”

The Islamic Republic’s participation was suspended after a crush in September which killed thousands of pilgrims, including 464 Iranians.

Several sets of talks have been held to resolve political issues and security matters, but had appeared to stall before Friday’s announcement.

Since the start of the year, Iran’s Rouhani Government has combined high-level meetings with Gulf States, in an apparent mediation of the Iranian-Saudi conflict, with ongoing criticism of Riyadh.

In its latest message on Thursday, Foreign Minister Mohammad Javad Zarif said “cooperation with the neighbors, including Saudi Arabia, should aim for peace in Bahrain, Yemen, and Syria”, but he continued: “If a country adopts wrong measures and attacks Yemen and supports Daesh [the Islamic State] and the al-Nusra Front in Syria and Iraq, it should blame itself for the consequences.”

Saudi Arabia broke off relations with Iran in January 2016, following Riyadh’s execution of a prominent Shia cleric and a crowd attacking and burning the Saudi Embassy in Tehran. The two countries have been on opposite sides of regional crises, including the Syrian conflict, the Yemeni civil war, and Bahrain’s crackdown on mass protests.