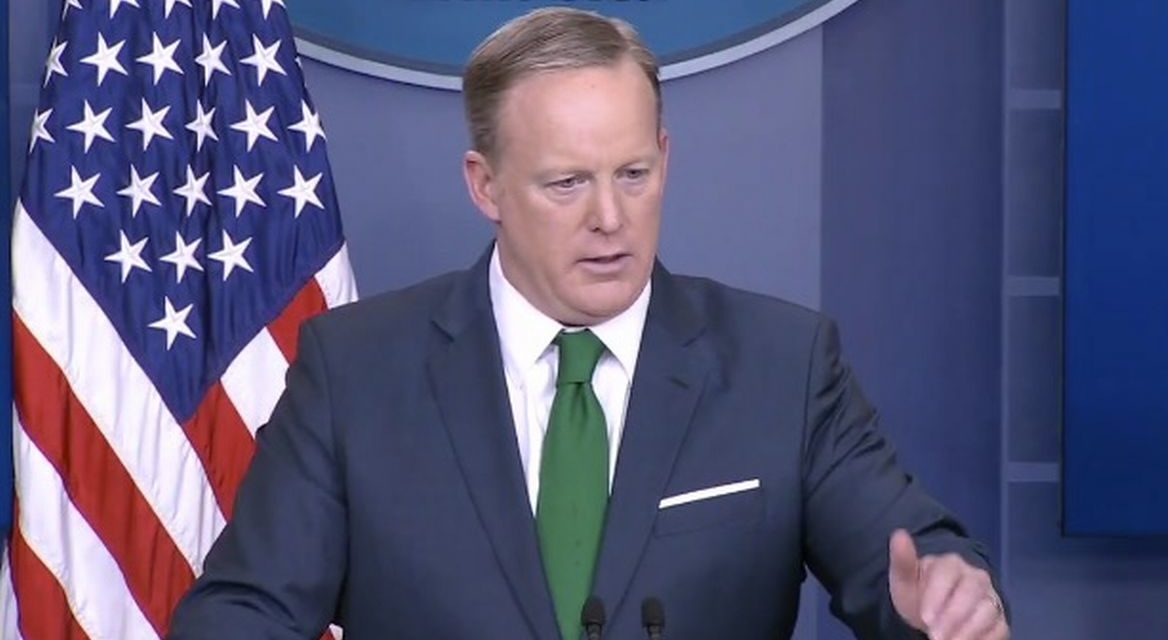 Developments on Day 56 of the Trump Administration:

Even as the Senate Intelligence Committee dismisses Donald Trump’s unfounded wiretapping allegations against President Barack Obama, the White House adds a new one.

White House spokesman Sean Spicer proclaimed that Britain’s electronic intelligence agency, GCHQ, was used by the Obama Administration in 2016 to spy on the Trump campaign.

Spicer’s assertion was based on a claim by Fox News commentator Andrew Napolitano that Obama used GCHQ so there would be “no American fingerprints on this”. He said he had “three intelligence sources” for the allegation.

GCHQ issued a rare public statement: “Recent allegations made by media commentator judge Andrew Napolitano about GCHQ being asked to conduct ‘wiretapping’ against the then president-elect are nonsense. They are utterly ridiculous and should be ignored.”

Earlier on Thursday, the Republican and Democratic leaders of the Senate Intelligence Committee had rejected Trump’s claim — put out in a series of tweets on March 4 — that President Obama had wiretapped Trump Tower.

Senators Richard Burr and Mark Warner said, “Based on the information available to us, we see no indications that Trump Tower was the subject of surveillance by any element of the United States government either before or after election day 2016.”

The House Intelligence Committee’s GOP chairman and top Democrat issued a similar statement on Wednesday, after the Trump Administration failed to produce any evidence to back up the President’s allegations.

Spicer hit back on Thursday, “These are not findings.”

Postmark Indicates Trump May Be Behind Tax Return Leak

The Jesters Court posts circumstantial evidence that Donald Trump, or someone close to him, may be behind the leak of two pages of his 2005 tax return to the media earlier this week.

The pages from Trump’s 1040 declaration were mailed to journalist David Cay Johnston. They showed that Trump paid $38 million on a declared income of $150 million — although, under the President’s tax proposals, this have been only $7 million.

See TrumpWatch, Day 54: A Furor Over 2 Pages of a Trump Tax Return”

Jester’s Court notes that the Trump’s 2005 tax return may have been relatively full and frank because of required information for his wife Melania’s US naturalization that year.

The indication that the President’s camp may have behind the release of the two pages of his 1040 form — the only information about his tax payments in the past 20 years — is the Westchester County, New York postmark on the letter sent to journalist Johnston.

Trump’s family were in Westchester County at the time that the letter was posted.

Trump’s Budget Director: No Evidence That After-School Programs Have Value

Justifying the elimination of after-school programs — as well as pre-school and summer school counterparts — Office of Management and Budget Director Mick Mullaney says they have no value:

I think the president was fairly straightforward on that: We’re not spending money on that anymore.

Republican Senator: I Will Not Support GOP Healthcare Plan

“This is not a bill I could support in its current form,” Collins said in a phone interview. “It really misses the mark.”

She cite the Congressional Budget Office’s estimate that 14 million people will lose coverage next year and 24 million by 2026:

This bill doesn’t come close to achieving the goal of allowing low-income seniors to purchase health insurance. We don’t want to in any way sacrifice coverage for people who need it the most.

Collins was one of four GOP Senators who expressed concerns last week, soon after the House bill was published.

The Republicans hold a narrow 52-48 majority in the Senate, so only three defections could jeopardize passage of the legislation.

Trump’s former National Security Advisor Michael Flynn was paid more than $67,000 by Russian companies before the November 2016 election, according to documents released by a Democratic congressman.

Representative Elijah Cummings of Maryland asked the Trump Administration to provide a comprehensive record of Flynn’s contacts with foreign governments and interests. Flynn was dismissed after 24 days as NSA, amid revelations of his phone conversations with the Russian Ambassador in Washington in late December.

Flynn accepted $33,750 from Russia State outlet RT to appear at a Moscow event in December 2015 — a few months before he began formally advising the Trump campaign — and thousands more for expenses covered by RT and speech fees from other Russian firms.

Last week, Flynn registered with the Justice Department as a foreign agent for the Turkish Government from August to November 2016.

Flynn initially asked for a higher fee than the $45,000 paid to his speakers’ group, Leading Authorities Inc., but was asked to reduce his price.

“If Gen. Flynn is coming, we would like him to be front and central at the Moscow conference,” an RT official told Flynn’s representatives in a November 2015 e-mail. In Moscow, he was interviewed by an RT personality on national security affairs before attending the lavish RT gala alongside Russian President Vladimir Putin.

Flynn and his son received an unspecified amount in expenses paid by RT for business-class flights to and from Moscow and for their three-day stay at the Hotel Metropol.

Flynn was also paid $11,250 for two speeches in Washington — in August for Volga-Dnepr Airlines, a Russian charter cargo airline, and in September for Kaspersky Government Security Solutions Inc., a US subsidiary of Kaspersky Lab, a Russian-based cyber-security firm.