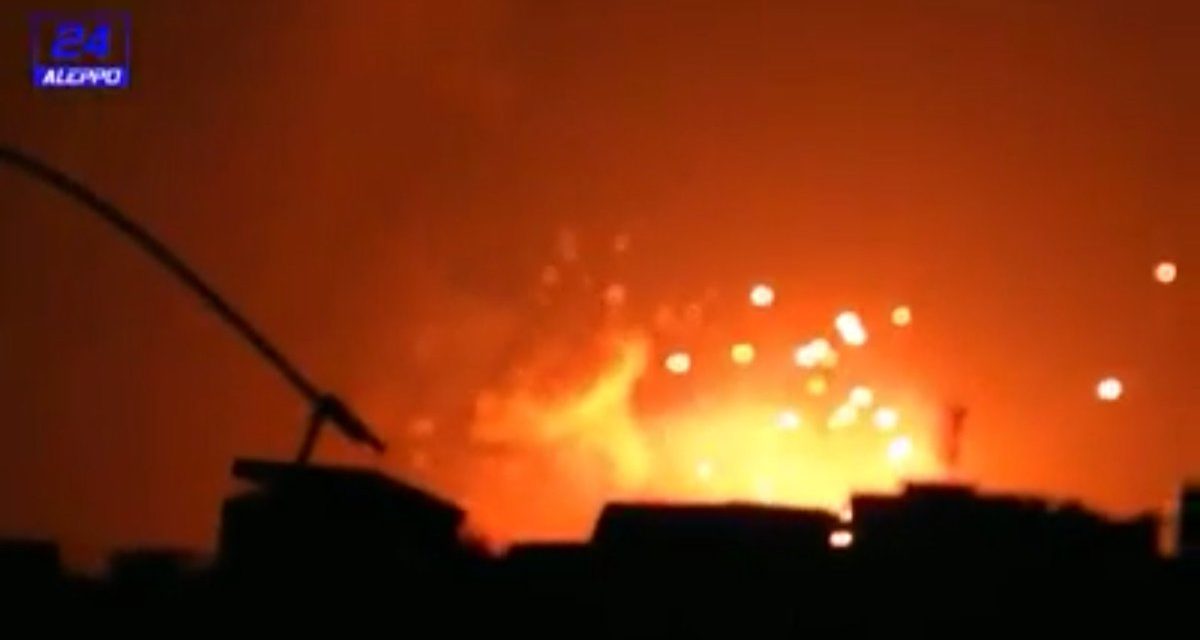 Video showed fires inside the factories in Safira, 20 km (12 miles) east of Aleppo.

Many of the regime’s barrel bombs, which have killed thousands of civilians, and other bombs and ordnance are produced in the factories.
It supplies ammuntion to 16 smaller depots around northern Syria. In October 2014, rebel launched a short-lived offensive in an attempt to open a route to attack the site.

The rebel faction Jaish al-Islam has issued a statement of responsibility for Saturday’s attack. A regime “informed source” insisted that the blast was “most probably due to a fatal error made by some technicians that set fire to an ammunition depot”.

The number of regime casualties is unknown, although claims of up to 200 dead have circulated on social media. Citizen journalists said wounded troops and their families were transferred to Nayrab military airport.

Residents of opposition-held Aleppo celebrate news of the explosions:

Rebels have also claimed a successful strike inside the Nayrab base, destroying a Grad rocket launcher with an anti-tank guided missile.

A civil defense center in the al-Marj area of Damascus Province, destroyed by pro-Assad airstrikes:

Russian and regime attacks have destroyed or damaged dozens of hospitals, clinics, civil defense centers, and other medical facilities, including a hospital in Kafr Hamra in Aleppo Province last week.

83 Killed on Saturday Amid Pro-Assad Bombing of Aleppo

The Local Coordination Committees documented 83 deaths across Syria on Sunday, including 17 children and 13 women.

The LCC said 52 of the victims were in Aleppo Province, most of them from pro-Assad bombing of the al-Fardus district of Aleppo city.

Victims this morning of airstrikes on Houla in northern Homs Province:

However, the LCC said more than 30 of the attackers had been killed.

Hundreds of barrel bombs and other explosives have been dropped in recent weeks on Darayya, cut off since November 2012. Last month the Syrian military advanced in the southwest and took over plots of land, essential for the limited food supply, and last week they moved forward with armored vehicles in the east of the town.

A rebel fighter said there are now less than 1,000 defenders in Darayya.

Fighting for Control of Kinsabba in Latakia Province

Rebels and regime forces are battling for Kinsabba, a key town in the mountains in northern Latakia Province.

Pro-regime outlets claimed on Saturday that the town — which had been recaptured by rebels last month — had fallen to the Syrian military.

However, rebels said that the battle was ongoing. Pro-opposition activists say this morning that Kinsabba is again in rebel hands, after a dawn attack.

Control of Kinsabba would be essential for any attempted regime advance into opposition-held Idlib Province.