Turkey Analysis: Erdogan, the Military, and a Bleak Future for the People 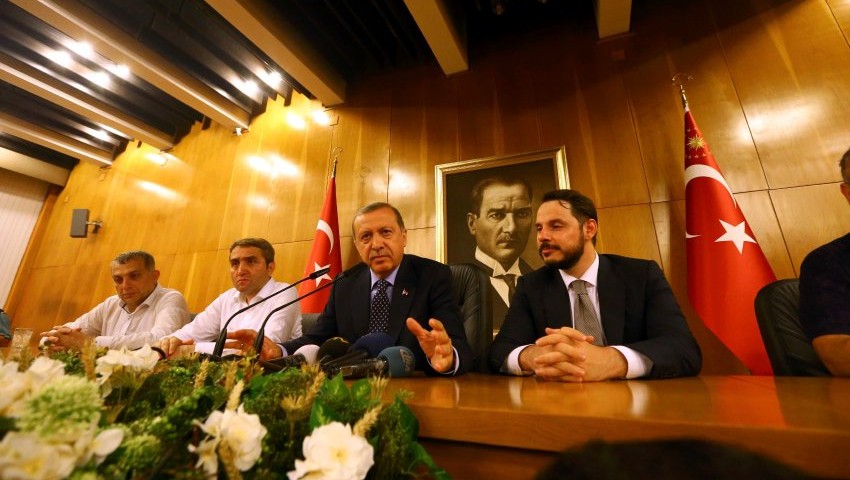 PHOTO: President Recep Tayyip Erdoğan at a press conference at Istanbul’s airport early Saturday, in front of a portrait of the founder of the Turkish Republic, Kemal Ataturk

Daniel Round writes for EA:

Today people inside and outside Turkey will try to take stock of the extraordinary events of the last 24 hours, in which a coup by part of the military appeared to be close to success, only to be rapidly defeated after President Recep Tayyip Erdoğan called on the public to take to the streets.

There will be conflicting responses, wrestling both with Erdoğan’s move to authoritarian rule and suppression of dissent and with the prospect of a military regime:

I protested erdoğan during gezi. I was tear gassed by his police. I think akp is trash. but I support them against a fascist military coup.

There will be uncertainty about what comes next, with Turkey also caught up in regional conflicts and the influx of almost three million Syrian refugees, the fighting between security forces and the Kurdish insurgency PKK, and a series of bombings by the Islamic State.

A look forward might begin with a look at the past between the Government and the military.

The last military coup in Turkey was in 1997 — often referred to as the “postmodern coup” or the “coup by memorandum” — when the army forced out Prime Minister Necmettin Erbakan, leader of the Islamic Millî Görüş movement.

However, it was the last “hard” military coup in 1980 that fundamentally reshaped Turkish politics and society. Islam was gradually reintroduced into Turkish politics to bolster the legitimacy of the State among the marginalized masses, amid a bloody civil war in the southeast.

The post-1980 Islamo-nationalist (or Turco-Islamic) synthesis paved the way for Erdoğan’s Justice and Development Party (AKP). But while ruling since 2002, the AKP has faced much resistance from within the State apparatus, demonstrating the contradictions of the modern Turkish state.

The memory of the 1997 coup-by-memorandum against a pious Prime Minister has lingered in the minds of religious AKP supporters. Erdoğan is often portrayed as the savior of civilian rule after decades of military intervention by an elite cabal of aloof, decadent generals. Meanwhile, the army presents itself, alongside the judiciary, as the bastion of Kemalist secularism.

The armed forces have always seen Erdoğan and AKP as a threat., with an alleged coup by secular generals — Operation Sledgehammer — dating to 2003. After AKP’s Abdullah Gül became President in 2007, generals boycotted official ceremonies because Gül’s wife Hayrünnisa was wearing a headscarf.

During the first term of AKP rule from 2002 to 2007, then-Prime Minister Erdoğan was fairly cautious, not wishing to give the “deep State” cause to react. But after AKP’s resounding election victory in 2007, with 47% of the vote, an emboldened Erdoğan took action against the old establishment.

Initially, the battle was fought through the courts. In 2007 allegations surfaced about a clandestine group named Ergenekon – an ultra-nationalist organisation that had infiltrated the Turkish military. A year later, the pressure was on AKP, with the Constitutional Court coming very close to shutting it as “a centre for anti-secular activities”.

In 2010, the pendulum swung again as the Sledgehammer allegations surfaced. Hundreds were arrested and tried in the ensuing Ergenekon and Sledgehammer proceedings, not only military officials but also journalists and opposition politicians. Additional raids since 2013, escalating after the Gezi Park protests and corruption scandal, targeted lawyers, judges, intellectuals, and alleged followers of the exiled cleric Fethullah Gülen.

Erdoğan, President since 2014, now says he is battling a “parallel state”. Meanwhile, the Government has moved to militarize and politicize the police, providing the President with a new power base — one which proved essential to his survival against last night’s uprising.

Since 2011, Erdoğan had enjoyed an improved relationship with a subdued army, and had appointed loyalists to top positions in the military and security services. The Government also tried to reform the culture of the armed forces, shifting it from the traditional secular orientation — for example, in 2014 Quran classes were introduced in military schools for the first time.

However, with the war across the border in Syria and the breakdown of the peace process with the PKK from July 2015, the Government had to turn to experienced generals who are less likely to be sympathetic to the AKP’s politics. Concern has risen from the spillover of the Syrian conflict, with both ISIS and the Kurdish Freedom Falcons (TAK), an offshoot of the PKK, launching deadly attacks in Turkish cities.

Meanwhile, there is widespread opposition to Erdoğan’s plans to change the Constitution. Although pledges have been made to uphold the secular nature of the Turkish Republic, there is much support among the AKP base for religious ideas to be introduced. Last night’s statement by the leaders of the uprising, under the auspices of the “Peace in the Country Council”, said that “secular democracy has been annulled” by the President. 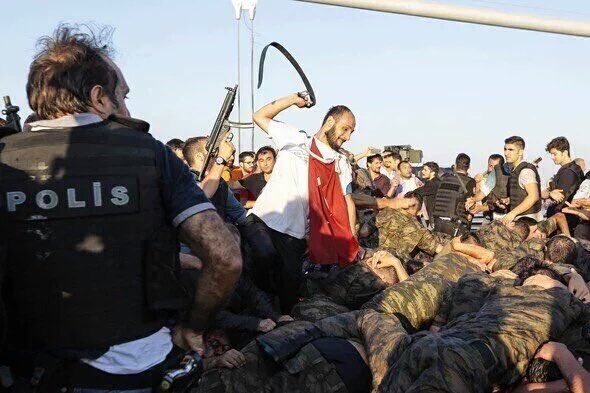 But what happens now?

Erdoğan’s survival will likely be his Reichstag Fire moment. The coup attempt will be a pretext to clamp down even further on the “parallel state”, targeting alleged Gülenists and clandestine secular-nationalist elements in the army and judiciary.

That leaves Turkey’s ethnic minorities and opposition groups between the Devil and the deep blue sea. They always have the most to lose from military juntas, as they are well aware from the horrifying experience of widespread State terror in the 1980s under General Evren. But in Erdoğan’s post-coup rule, it is Kurds, liberal voices in the media, trade unionists, and opposition parties — especially the leftist HDP, whose deputies’ parliamentary immunity was recently lifted — who will bear the brunt of ramped-up authoritarianism, censorship, and lumpen-populism.

For many oppressed people in Turkey, a civilian government dominated by the current President could be little better than another 1980s-style junta.

The President’s “Yeni Türkiye” (New Turkey), molded by the AKP vision, will be both shaped and seriously damaged by these events. If democracy and pluralism are to have a chance, it is crucial that Erdoğan is not allowed to further monopolize the “pro-civilian”, “pro-democracy” narrative and that opposition voices of all stripes are heard. But the prospects for this in the current political landscape are bleak.