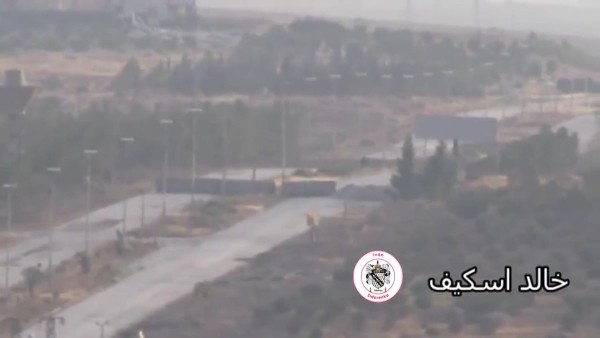 PHOTO: View of the al-Castello Road, the last route into opposition-held Aleppo, from a Syrian military position

UPDATE 1630 GMT: Pro-opposition sources claim that the pro-Assad forces have been pushed back from the al-Castello road and have retreated to the southern portion of the nearby al-Mallah Farms.

However, the regime’s heavy artillery still have fire control over the road, which has been closed to traffic by rebels.

After months of attempts, the pro-Assad forces established fire control over the al-Castello Road earlier this month, capturing the al-Mallah Farms and establishing positions within 1.5 km (1 mile) of the route. Rebels tried by failed last weekend to regain nearby hills to remove heavy artillery.

With Castello Rd into Aleppo closed, a doctor tells me food prices have tripled. & still the bombs continue – another hospital damaged yday.

Meanwhile, pro-Assad forces continue their attempt to advance in areas of western Aleppo city, such as Layramoun, Bani Zeid, and Khalidiyah. Pro-regime outlets claim that the Syrian military and allies have fire control of the Layramoun roundabout.