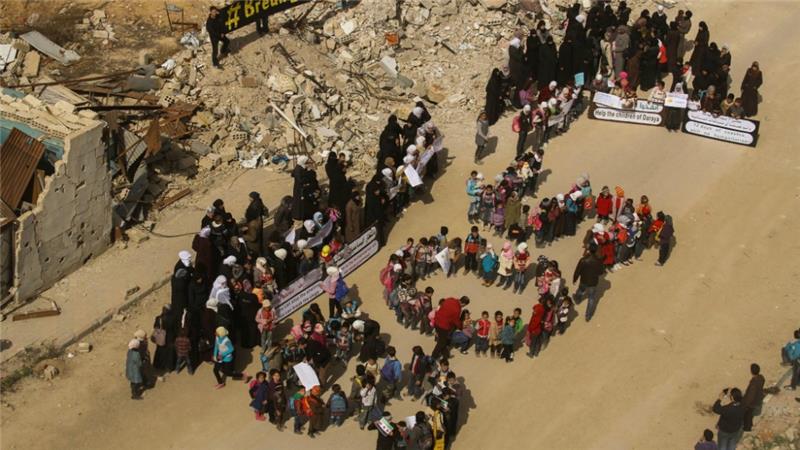 PHOTO: Women and children in Darayya, near Damascus, appeal for aid in April

Facing an international deadline to allow aid into besieged areas, the Assad regime gave the UN and the Red Cross approval on Thursday for convoys into 11 locations across Syria.

Eight of the areas are opposition-held. Two are the regime enclaves of al-Fu’ah and Kafraya, north of Idlib city. The other is Yarmouk in southern Damascus, much of which is held by the Islamic State.

The regime also said that it will now permit medical assistance, school supplies, and milk for children into the opposition areas of Darayya — cut off since November 2012 — and Douma near Damascus.

The International Syria Support Group of 17 countries, the UN, European Union, and Arab League instructed the UN’s World Food Program to begin airdrops of aid by June 1 if the Assad regime continue to blockade opposition towns.

Last week, UN envoy Staffan de Mistura pulled back from the commitment, saying the airdrops needed the regime’s assent. However, the US, Britain, and other countries repeated on Thursday that the assistance must begin.

The demand followed the Assad regime’s fumbling attempt to show that it was finally allowing aid into Darayya, which pro-Assad forces have bombarded and tried to occupy over the past month. A convoy on Thursday contained no food, and many of the packages were half-empty — indicating that items such as medical supplies might have been removed before the delivery.

Speaking via Skype to an audience in Washington DC on Thursday, President Assad’s senior advisor Bouthaina Shaaban insisted, “It is a very fertile land. No one is starving in Darayya.”

Senior UN officials, including the head of humanitarian operations Stephen O’Brien and the head of Syrian operations Jan Egeland, have denounced the regime for tightening blockades in April and May and for seizing medical assistance from the convoys. Egeland said last week that the situation is critical, with children endangered in areas like Darayya.

The Assad regime briefly eased access followed a February 27 cessation of hostilities agreement, but soon renewed the sieges. The UN was able to assist only 5% of hard-to-reach areas in April.

O’Brien will brief the UN Security Council on Friday about the situation.

UN officials were still cautious on Thursday about airdrops.

The officials said there were no imminent plans for the assistance. They repeated de Mistura’s line that, for security reasons, the consent of the Assad regime was needed.

I think that everybody agrees that to go by land with 100 tons in a few trucks is better than a few tons by helicopter….

[If] we have to go by air delivery, World Food Program and unarmed humanitarian organizations would need clearance by the government….If that is not there, then it is clearly a question for the member states [of the International Syria Support Group].

Claimed video of a protest by Arab residents of Slouk, north of Raqqa city, against the YPG militia:

The residents were reportedly angered that they have not been allowed into their homes, 11 months after the YPG reclaimed the village from the Islamic State.

Kurdish forces apparently fired into the air to try and disperse the protest.

The Jaish al-Fatah bloc expanded their control near Khan Tuman, the town close to the Aleppo-to-Damascus highway that they captured last month. They defeated Iranian units and Iranian-led foreign militia to the east of the own, destroyed a battle tank and several vehicles. Among the area taken was a large military fuel depot (see map).

The rebels held the positions despite, in the words of one local source, “Insane air attacks on the battlefield. Russia and regime deploying everything that can fly.”

Rebels: We Repelled Another ISIS Attack on Mare’ in Northern Aleppo

Rebels say they have repelled another Islamic State attack on the frontline town of Mare’ in northern Aleppo Province, inflicting dozens of casualties.

Pro-rebel outlets said the assault was the sixth attempt by ISIS to enter Mare’ since they advanced in the province last Friday.

The Islamic State cut links between Mare’, at the front of the rebel-ISIS war since early 2014, and Azaz near the Turkish border.

Sounds of the fighting last night:

Mare’s defenders have reportedly received airdropped weapons from the US-led coalition for the first time: 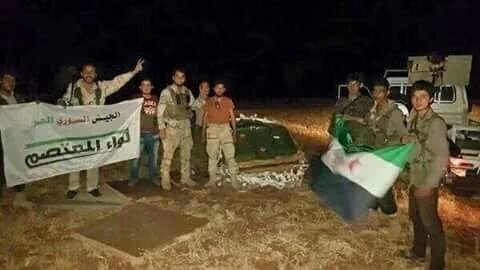 The rebel bloc Jaish al-Fatah announced on Thursday that it is moving fighters outside Idlib city in northwest Syria because of pro-Assad airstrikes on civilians.

Russian and regime air forces have repeatedly targeted the city. On Monday night, 10 Russian attacks killed dozens of people near the National Hospital.