Syria Daily: A Token Shipment of Aid to Besieged Darayya 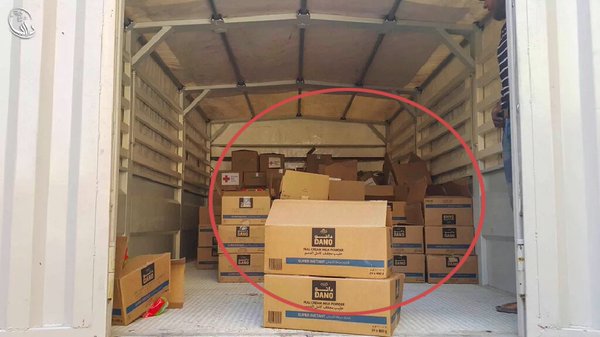 PHOTO: Boxes in one of the “half-empty” trucks that delivered aid to Darayya near Damascus on Thursday

UPDATE 1545 GMT: President Assad’s senior media advisor, Bouthaina Shaaban, has told an audience in Washington DC that “no one is starving” in Darayya.

Shaaban, who is barred by US sanctions from entering the country, was speaking to an event organized by the “Global Alliance for Terminating ISIS/Al-Qaeda” at the National Press Club.

ORIGINAL ENTRY: Aid has reached besieged Darayya, southwest of Syria’s capital Damascus, for the first time since November 2012 — only to bring more frustration, anger, and even suspicion that the delivery was a token staged by the Assad regime to deflect international pressure.

Wednesday began with an announcement by Assad’s ally Russia that a 48-hour ceasefire had been arranged — only a day after the latest aerial and ground attacks on the town — so the assistance could reach Darayya.

Later in the day, several trucks arrived. That was an advance on the previous attempt to deliver aid on May 12, when the Syrian military had halted a five-truck convoy on the outskirts and pro-Assad forces had then shelled waiting for the assistance, killing a father and son and wounding five other people.

However, when the packages were opened on Thursday, some were empty and the others contained no food except for a small amount of baby formuala. Instead, there were some drugs, medical equipment, and items such as condoms and mosquito nets.

A detailed list of items showed that in addition to the denial of food, there was an absence of vaccines, micronutrients, pre-natal supplements, oral hydration salts, water purification, and hygiene kits.

Residents were filmed declaring, “All the trucks were empty or full of things we don’t need.”

The incident raised suspicions that aid had again been stolen en route to its destination. UN officials, including the head of humanitarian operations Stephen O’Brien, have reported that regime personnel have systematically taken medical equipment and supplies from convoys, and food was missing earlier this year from parcels delivered to besieged areas.

Jakob Kern, the World Food Program director in Syria, said that the regime had not allowed food in the first delivery, but said another convoy with food is planned for Friday.

However, local council member Hussein Ayash noted the continuing attacks on Darayya, “The regime forces violated the Russian truce, firing rockets into the town and shelling farmland to deny more than 8,000 besieged civilians there any access to food.”

Residents and activists noted that the delivery to Darayya came on the day that the International Syria Support Group had pledged to start aid, including by airdrops, if the Assad regime did not ease blockages.

Two weeks ago, the ISSG — 17 nations including the US and Russia, the UN, and the Arab League — called on the UN’s World Food Program to provide assistance by June 1. The declaration came after the Assad regime tightened sieges in April and May, with the UN helping only 5% of hard-to-reach areas.

Last week, UN envoy Staffan de Mistura stepped back from the commitment, saying that airdrops depended on the assent of the Assad regime. The statement brought criticism from several ISSG members, including Britain and the US, and the insistence that the air support must be pursued.

Marjolein Wijninckx, the Syria Programme Manager at the peace organization PAX, said that the Darayya convoy was “a small amount of medical aid just in time for the ISSG deadline.”

“It will only have an impact if the flow of food and aid is unimpeded,” Wijninckx said. “The siege of Darayya is a collective punishment and must be lifted, together with all the sieges in Syria, to ensure lasting peace.”

The Syrian Arab Red Crescent has long faced claims that it is complicit with the Assad regime in the provision — or restriction — of aid. SARC President Abdul Rahman al-Attar is a member of the regime’s elite as one of Syria’s wealthiest businessmen. He heads the Attar Group, with interests in the pharmaceutical, insurance, banking, tourism, and agriculture industries, and he is the Chair of Syria’s International Chamber of Commerce.

The US and Britain both said on Wednesday that airdrops should proceed despite the convoy to Darayya.

While air drops are complex, costly and risky, they are now the last resort to relieve human suffering across many besieged areas. Countries with influence over the Assad regime such as Russia and Iran must now ensure that these air operations can proceed in a safe and secure manner.

Noting that US Secretary of State John Kerry spoke with Russian Foreign Minister Sergei Lavrov on Wednesday, an unnamed American official told The Washington Post about the lack of progress in political talks and issues such as the sieges:

Are we satisfied? No one is satisfied….

The idea is to continue to push forward….[But] the reality is that Russia and the Assad regime have not fulfilled the commitments they’ve made.

The Russian Foreign Ministry said about the Kerry-Lavrov call, “The situation around Syria and particularly the necessity of resolute joint actions against Jabhat Al-Nusra and other terrorist grouping — something the Russian side has long been calling for — were the focal points of the discussion.”

A Delivery to Besieged Moadamiya

As the suspicions grew over Darayya’s, aid was delivered to nearby Moadamiya on Thursday, after the local council agreed in principle to conditions set by the Assad regime and Syrian military.

On Thursday, Moadamiya’s council reportedly accepted conditions such as the removal of the barricades, trenches, and tunnels; a rejection of any affiliation with rebel factions by those remaining in Moadamiya; an account of all arms; and evacuation of those rejecting the settlement.

After a siege in which more than 100 people died of starvation, the Moadamiya opposition consented to a “truce” in early 2014. Despite the agreement, the Syrian military has maintained the blockade and regularly bombarded Moadamiya, as well as Darayya.

Besieged al-Wa’er in Homs: “We Died, Our Families Died, Even the Grass Died”

Syria Direct posts interviews with some of the estimated 250,000 residents of al-Wa’er in Homs, who are still under siege and bombardment despite a December “truce” agreement:

Men dig out bodies from under rubble after pro-Assad airstrikes on the town of Ariha in Idlib Province:

White Helmets rescuers respond to a strike in Ma’arat al-Nu’man:

Damage to the Grand Mosque in Ma’arat Misrin:

The attacks came just over 48 hours after Russian attacks on Idlib city killed dozens of people near the National Hospital.

There were also strikes on opposition areas in Aleppo city — men pull out victims from rubble in the Saliheen district:

The opposition-rebel High Negotiations Committee has proposed a nationwide truce for the holy month of Ramadan.

The proposal was made in a letter from Riad Hijab, the HNC’s coordinator, to UN Secretary-General Ban Ki-moon.

“The letter to Ban Ki-moon suggests a truce. We know there should be one, full respect of the truce across the country, nationwide, for the full month of Ramadan,” said HNC member Basma Kodmani.

“Ramadan being next week, that would start creating the right conditions, the right atmosphere, for us to return to [political talks in] Geneva,” she added.

A spokeswoman for UN envoy Staffan de Mistura confirmed that the proposal had been put to the International Syrian Support Group: “Any consideration to de-escalate the fighting on the ground is most welcome, especially during the Holy Month of Ramadan.”