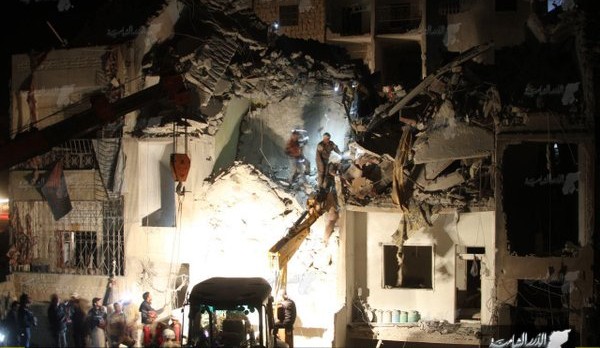 PHOTO: Damage near the National Hospital in Idlib from airstrikes on Monday night

Dr. Hassan Qador, a hematologist at the National Hospital in Idlib city in northwest Syria, talks to Syria Direct about Monday night’s barrage of 10 missiles — apparently fired by Russian warplanes — near the medical facility that killed dozens of people and wounded up to 250.

Q: What damage did the National Hospital of Idlib sustain as a result of the airstrikes?

A number of missiles struck the immediate vicinity of the hospital, damaging the building’s windows and doors. Fortunately, neither the foundational structure of the hospital nor the medical equipment inside were damaged during the attack.

The hospital has temporarily shut down its operations for two reasons. First, there was an urgent need to repair the damage that the building sustained. Secondly, the city of Idlib and its surrounding countryside were under intense fire from the warplanes, which were targeting hospitals, medical centers and bread ovens, among other locations. This prevented hospital staff from performing any repair work. As a result, the National Hospital of Idlib is still closed.

Q: What are the biggest challenges that you, and the hospital, face as a result of these airstrikes?

In the wake of such attacks, we lack sufficient, well-equipped hospitals. There are simply not enough resources to treat such a large number of injured patients at one time. Furthermore, the most serious cases require full medical teams with doctors trained across multiple specialties; however, most hospitals lack such critical care capabilities. For example, a CT scan is only available at the National Hospital of Idlib, but the hospital is currently shut down because of the recent airstrikes.

We already struggle with a shortage of doctors in Idlib, and the deliberate targeting of medical personnel and facilities further exacerbates this already fragile situation. Hospitals are systematically and repeatedly targeted. They are not just coincidentally in the line of fire. Likewise, an area will be bombed, and as soon as medical personnel rush to the scene, the warplanes will circle back for a second strike so as to inflict the maximum possible damage.

Each field hospital can only manage three, maybe four, emergency cases at a time, certainly no more. Once a hospital reaches its capacity, incoming patients have to be transported elsewhere. Unfortunately, during this time, the injured lose critical minutes—or even hours—for urgent treatment. In turn, our ability to save lives drastically decreases.

Just imagine that after an attack there are more than 200 people seriously injured, of which 10 in critical condition go to a particular field hospital at the same. This field hospital will likely have three doctors on call, three operating rooms and a score of different injuries to tend to. This is the situation that we’re dealing with over here.

Just one example: A person comes into the hospital with a serious shrapnel injury, a concussion and a broken rib. This person requires a general surgeon, a gastroenterologist, a neurologist, an anesthesiologist and a host of other assistants. How are we supposed to manage when five such cases all come in at the same time? We are placed in an impossibly difficult situation.

Q: How do you manage the patients who require specialized care at a fully equipped hospital?

For these difficult cases — those that require specialized care or specific medical equipment — we transfer the patients to the Bab al-Hawa Hospital on the Turkish border. Unfortunately, it is next to impossible to get these patients the medical care that they so desperately need because Turkey will only accept a very small number.