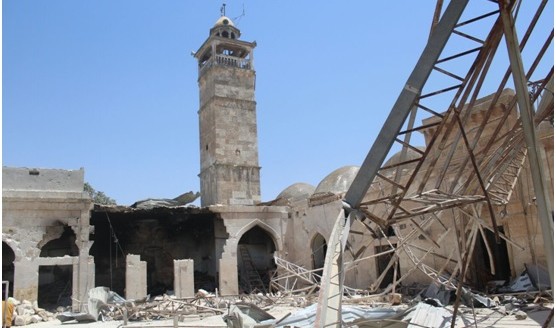 UPDATE 1500 GMT: Russian and regime warplanes have continued their attacks across Idlib and Aleppo Provinces.

Activists report dozens of civilian deaths in Aleppo Province today, even as the Russian and Syrian air forces are carrying out intensive attacks to try and blunt a rebel advance south of Aleppo city (see Syria Daily).

Among the sites hit in Aleppo city were the building with the main office of the Syrian American Medical Society.

This morning in #Aleppo: A 6-story building that housed the main @sams_usa office was hit by an airstrike. pic.twitter.com/xecCdxRPyR

Aftermath of raids on a school in the Zibdiyeh district of Aleppo city:

We announce that the province of Idlib is a province afflicted with disaster after being targeted by more than 40 airstrikes in 12 hours. We hold the international community responsible for what is happening today and every day in the city….

Northern Syria is being subjected to genocide at the hands of the regime and its allies – the Russians and the Iranians.

Russia and the regime have stepped up the attacks this week, including the killing of dozens of people and wounding of up to 250 in Idlib city on Monday night.

Friday Prayers have been cancelled in Aleppo and Idlib because of the threat from airstrikes.

Men dig out bodies in Ariha:

Syria’s third-oldest mosque was badly damaged by a direct airstrike early Thursday in a town in Idlib Province.

The mosque was built in the 7th century. Only the Umayyad Mosque in Damascus and the Great Mosque of Aleppo are older.

“The mosque is no longer suitable for prayer because of the destruction,” said Abu al-Zahraa. “People are afraid to pray there. It’s become a target.”

The rebel bloc Jaish al-Fatah announced on Thursday that it is moving fighters outside Idlib city in northwest Syria because of pro-Assad airstrikes on civilians.

Jaish al-Fatah, which coordinated the rebel capture of almost of Idlib Province in spring 2015, said its decision was made “to put the al-Assad regime in direct confrontation with displaced Syrians, including women and children, exposing the regime for its mass killing of civilians.