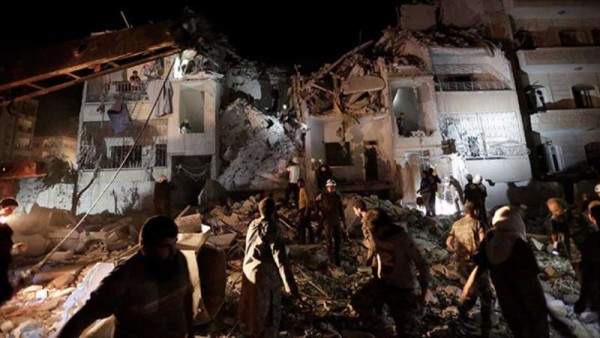 PHOTO: Scene of the Russian airstrikes near Idlib’s National Hospital

Russia’s officials tried on Tuesday to deny any responsibility for airstrikes in opposition-controlled Idlib city in northwest Syria, in which more than 50 people were killed and about 250 were wounded.

Residents, rescuers, and activists reported that 10 bombs struck near Idlib’s National Hospital on Monday night. They said they recognized the distinctive signature of strikes by Russian-piloted Su-24 attack aircraft.

“[This was] the heaviest bombardment I’ve witnessed since the beginning of the revolution….Russian warplanes targeted civilian centers,” citizen journalist Imad Abu Ayman said.

After a silence of several hours, the spokesman for Russia’s Defense Ministry insisted, “No combat missions, let alone delivering airstrikes, have been performed by the Russian Air Force in Idlib province.”

The denial is the latest in a series by the Defense Ministry of strikes on more than 30 medical facilities since Russia’s aerial intervention began on September 30. The Ministry has said on previous occasions that attacked hospitals do not exist and that images of damage were manipulated.

After missiles killed 55 people at the al-Quds Hospital in east Aleppo in late April, Konashenkov initially blamed the US-led coalition, even though it does not operate near the city. Later, he insisted that the hospital had been damaged six months earlier, implying that witnesses were recycling stories of bombings and deaths.

US: “Still Looking Into What Happened”

Later on Tuesday, Russian State media seized on a cautious statement by US State Department spokesman John Kirby, “We’re still looking into what happened in Idlib. We don’t have a great sense of complete knowledge here of who’s responsible.”

Confirmation of Russia’s direct involvement in the attacks could be a damaging blow to US-Russian co-operation, including the brokering of a February 27 “cessation of hostilities” — now effectively collapsed in much of Syria — and the failed political talks in Geneva.

Therefore, Kirby was hesitant to lay any blame in his daily briefing for journalists:

But I can assure you that we’re very focused on it. We’ve seen the images, same as you there, and we’re going to do what we can to get to the bottom of it.

The Eldorar site said a passenger bus was hit by an artillery shell. Four other people were wounded.

Russian and regime forces have tried to cut the road, north of Aleppo, with bombs, shells, and snipers. An airstrike damaged a bridge on the route on Tuesday.

Syrian Currency Recovers 1/3 of Value Compared to May

Syria’s currency has rebounded sharply on unofficial markets, recovering about 1/3 of its value after a near-collapse last month.

The rate of the Syrian pound is being reported at 410:1 vs. the US dollar, compared to a low of 645:1 in May following weeks of decline.

No reason has been given for the recovery, although the Syrian Central Bank intervened in May with forced sales of millions of dollars to all currency exchange companies and outlets.

On Wednesday, the Central Bank set the intervention rate at 475:1.

A 48-hour ceasefire has allowed a limited delivery aid into besieged Darayya, southwest of Damascus, for the first time since November 2012.

The Russian coordination center in Syria had announced the truce.

However, the opposition site Eldorar said the delivery included only drugs and some medical equipment, with no provision of food.

Residents said, “All the trucks were empty or full of things we don’t need.”

Darayya has been cut off since November 2012 by the Syrian military. It was supposed to received aid in mid-May, but the Syrian army halted a five-truck UN convoy on the outskirts of the town. Pro-Assad forces then shelled people waiting for the assistance, and Darayya was then bombarded as regime troops tried to enter.

Syria Video: “Have Aid Come” — Besieged Darayya in the Eyes of Its Children

An ISIS offensive last week cut off Mare’ from Azaz, on the Turkish border. Subsequent Islamic State attacks on Mare’ have been repelled.

Britain has reiterated that the Assad regime’s “continued obstruction and withholding of humanitarian aid…is illegal”.

The statement was issued by the Foreign Office’s Syria envoy, Gareth Bayley, on Tuesday:

The fact is the vast majority of areas are besieged by the Assad regime and in many cases the regime has refused to allow any aid in at all. There is only one explanation for this: Asad [sic] is using starvation and suffering as a weapon of war.

After allowing aid into some areas following a February 27 cessation of hostilities, the Assad regime tightened blockades in April and May. A series of UN officials, including the head of humanitarian operations Stephen O’Brien and the head of Syrian operations Jan Egeland, have condemned the restrictions and warning of imminent crises.

Bayley noted that the International Syria Support Group committed itself on May 17 to use influence with all parties to ensure access for aid.

“Despite this agreement the Asad [sic] regime has continued to prevent the delivery of aid convoys, remove medical supplies, prevent access of medical personnel, and refuse medical evacuations,” he said.

The ISSG had said that UN airdrops of assistance could begin on June 1 to alleviate the situation. However, last week UN envoy Staffan de Mistura said these would be conditional on assent by the Assad regime.

The three negotiators from opposition-held al-Wa’er were seized earlier this week as they went to a bakery on the outskirts of the besieged district for talks. They were taken to a Syrian intelligence building.

Rebels responded by detaining the Assad officials when they raided al-Ber hospital.

Although a “truce” was declared over al-Wa’er in December, the area — with about 250,000 residents, according to the opposition — is still blockaded and bombarded by the Syrian military.

The opposition Syrian National Coalition has appealed to Iraq’s Kurdish forces to join the fight against the Islamic State in Syria.

Al-Abdah said the presence of Kurdish peshmerga “would create balance on the ground and ensure safety of the Syrian people in general and the Kurds in particular”.

In addition to the Iraqi Kurdish peshmerga, there are thousands of Syrian Kurds in Iraq who want to join the fight and who have been trained by Iraqi counterparts. However, their return has been blocked by the Kurdish Democratic Union Party (PYD), the leading Kurdish faction in Syria.

Syrian rebels, already facing an Islamic State offensive and regime-Russian-Iranian attacks in northern Syria, are also under pressure from the Kurdish militia YPG, the military branch of the PYD.

Iraq’s Kurdish leadership has had tense relations with the YPG and the PYD.

In an interview with the Kurdish outlet Rudaw, al-Abdah called on the US to work with all Kurdish parties and the Free Syrian Army, rather than relying on the PYD and YPG.

Al-Abdah also discussed the political process with Barzani, calling for a breaking of the US-Russian “monopoly” to “help produce more serious negotiations”.

Pro-regime outlets are claiming that the Syrian army has taken control of Moadamiya, the besieged town southwest of Damascus, more than two years after a “truce” agreement.

Al-Masdar News declares that the opposition local council handed over the municipal building to the army, which raising the Assad regime’s flag. Barriers were lifted in return for the provision of aid to residents, who have been blockaded since late 2012.

The site claims that agreement has been reached in principle to transport 700 rebels to Idlib Province, but says that no date has been set.

Mahmoud Khatib, a member of the local council, said that the committee was negotiating “because of the abandonment of the international community and the UN and all humanitarian organizations of the city and other besieged cities”.

He said the Assad regime was demanding the removal of the barricades, trenches, and tunnels; a rejection of any affiliation with rebel factions by those remaining in Moadamiya; an account of all arms; and evacuation of those rejecting the settlement.

However, he said that the conditions were communicated by an intermediary on an “unofficial” paper without any regime stamp.

He added that the committee had given verbal agreement to Colonel Ghassan Hilal of the Syrian Army’s 4th Mechanized Division.

After a siege in which more than 100 people died of starvation, the Moadamiya opposition consented to a “truce” in early 2014. The terms reportedly included the raising of the Assad regime’s flag in exchange for food and supplies.

Despite the agreement, the Syrian military has maintained the blockade and regularly bombarded Moadamiya. It is also trying to seize nearby Darayya, which has been besieged since November 2012.