Syria Video: “Have Aid Come” — Besieged Darayya in the Eyes of Its Children 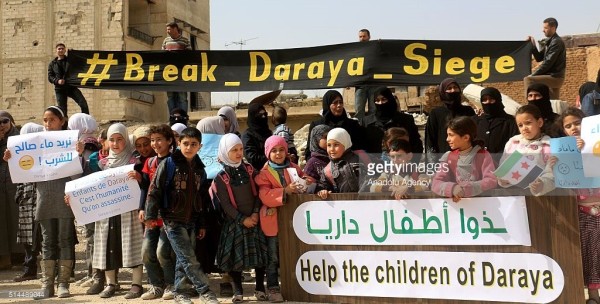 PHOTO: A message from Darayya’s women and children, March 2016 (Getty)

Before the Syrian uprising of March 2011, the Damascus suburb of Darayya had 170,000 people.

Now, after war and a regime siege imposed in November 2012, only 8,000 remain. The Syrian military continues to bomb and shell, hoping that its troops can overrun the devastated town southwest of the capital.

While thousands of children have left Darayya, more than 600 have been born amid the siege.

Some of those who have remained talk about their lives, in this video from Syria Direct:

When there is shelling, I don’t go to school, but when isn’t, I go.

Q: If you could have three wishes, what would they be?

A: Stop the fighting, have aid come, and see my relatives here.

What do I want? Food! Other than food, soccer.

For aid to come. [And] that they don’t come back and bomb us.