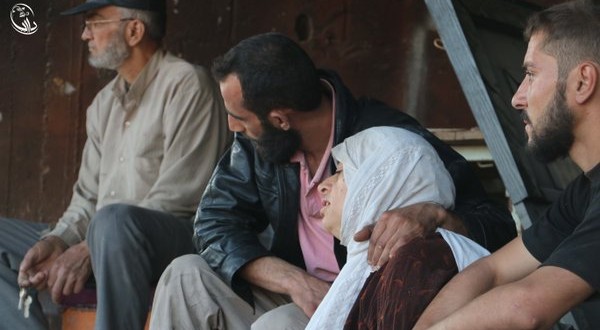 PHOTO: Residents of Darayya wait for news after blocking of aid convoy and shelling by Syrian military on Thursday

The local council of besieged Darayya, southwest of Syria’s capital Damascus, has said that a father and son were killed and five other people wounded as they waited for an aid convoy which was blocked by the Syrian military on Thursday.

The five-truck convoy was to be the first delivery of assistance to Darayya since it was blockaded by Assad forces in November 2012. Carrying baby milk and medical and school supplies, it was arranged after very lengthy and difficult negotiations” with the regime, according to the Red Cross.

However, the convoy was stopped at the last government checkpoint before the town. It remained there all day as the UN, the Red Cross, and the Syrian Arab Red Crescent argued with officials over access.

Residents and opposition activists said the aid workers were told that they would have to remove medical supplies from the convoy.

Soon after the convoy turned back for Damascus, shelling began.

Graphic photographs and video have been posted of the casualties and the aftermath of the attack:

The UN and International Committee of the Red Cross aborted the mission to Darayya because the convoy was refused entry, due to the medical and nutritional supplies on board.

These conditions, imposed by government security personnel, were unacceptable, and contrary to earlier guarantees and approvals obtained by the Syrian government.

Jan Egeland, the head of the UN Task Force for Syrian aid, angrily posted on Twitter:

The town’s residents have repeatedly appealed to international organizations this year for relief, including this SOS message by children: