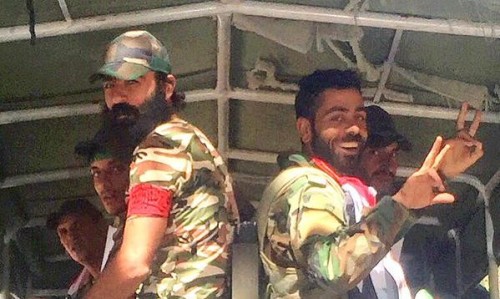 PHOTO: Claimed picture of regime troops setting out for the offensive in Hama Province

Testimony: Let’s Go Back to the Beginning….

President Assad’s military counter-attacked in Hama Province in central Syria on Tuesday, with contrasting claims about both short-term success and — more importantly — long-term effect in the 4 1/2-year conflict.

Supported by scores of airstrikes, ground forces moved back into the northern part of the al-Ghab Plain, a large area extending from Idlib Province — almost all of which is now controlled by rebels — south towards Hama city and west towards the Assad heartland of Latakia Province.

Tuesday’s counter-attack recaptured the towns of Mansoura, Khirbat Al-Naqous, and al-Ziyarah and the hilltop of Tal Wasit, according to both pro-regime and pro-opposition activists. However, by the end of Tuesday, rebels had reportedly moved back into some of the areas.

Rebel sources also said that — having pulled back to minimize losses from the intense aerial bombardment — the Jaish al-Fateh coalition had ambushed the advancing Assad troops, inflicting significant losses with anti-tank guided missiles. Some long-time observers of the conflict agreed, questioning the regime’s strategy:

A reliable local source commented, “The regime’s problem is that they apply conventional tactics against a rebel force that operates with guerilla tactics.”

Battles reportedly continued through the night.

Amid the Assad regime’s bombardment of East Ghouta near Damascus — including the mass killing in Douma last Sunday — civil defense workers say they are struggling with shortages of essential equipment.

In East Ghouta, and especially [the Damascus suburbs of] Arbeen, Madeira, and Hamouriya, we have no way of covering every air strike with our limited means, to say nothing of neighborhoods under particularly heavy bombardment which in turn threatens the lives of our rescue teams.

Our first responders lack basic equipment, medical devices, vehicles and fuel, all in part due to dwindling local supplies and soaring prices.

Mahmoud Adam, a spokesman with Damascus Province Civil Defense, added, “We’ve got only the most basic equipment –– shovels, picks and car jacks for lifting big blocks of cement –– and although we can and do save dozens with these simple means, its slow and difficult work.”

Rebels Claim Victory in Harasta, Near Damascus, With 100+ Regime Casualties

The rebel faction Ajnad al-Sham claimed on Wednesday that its attacks destroyed two buildings in Harasta, northeast of Damascus, killing or wounding more than 100 regime troops.

Pro-opposition sites said Syrian forces tried to regain positions such as the Technical Institute, with more than 10 airstrikes killing at least 12 civilians.

The Syrian air force is continuing its attacks on the Damascus suburb of Douma, three days after an attack killed at least 112 people and wounded more than 550:

Destruction in Douma from the bombing and shelling:

Erika Solomon of The Financial Times writes about the possibility that the Turkish lira, rather than the Syrian pound, will be used as currency in rebel-held parts of Aleppo city:

Activists in Aleppo advocating a currency switch say it is economically practical because Turkey has become the north’s main trading partner. It is also a way to hit the regime in one of its weakest spots, the economy.

Opponents say Syria’s impoverished population, most of whom are still paid in Syrian pounds, will be hurt by the move. They argue that sticking with the Syrian currency is a sign of nationalism, not regime loyalty.

Last week, the Sharia Council in northern Aleppo Province announced it would begin paying employees in Turkish lira to encourage the switch. Other local authorities are debating the issue.

However, the real issue may be the power of the dollar in the Syrian conflict:

In practice, the dollar reigns in Syria’s war economy — the Syrian pound has depreciated about 80 per cent against the US currency. Syrians in regime and opposition-held areas aim to convert their savings to dollars.

Osama Taljo, the head of opposition-held Aleppo’s city council, says this is exactly why he advocates adopting the lira. “All these [payments] are received in dollars and then transferred to Syrian pounds. In other words, I’m giving the regime dollars,” he says. “Imagine that: the revolution is supporting the regime economically…. That’s why everyone agrees on replacing the Syrian currency. But should we replace it with US dollars or the Turkish lira?”

Kurdish and Syrian State media report that an Islamic State suicide bomb has killed 13 people and injured 50 in the mainly-Kurdish city of Qamishli in northeastern Syria.

Despite the Islamic State’s claim of responsibility, as part of its battle with Kurdish forces, but Prime Minister Wael al-Halqi blamed “terrorism-backing countries”.

Video: Local Doctor Testifies on US Airstrike That Targeted Rebels and Killed Civilians

A local doctor in Atmeh, in Idlib Province near the Turkish border, talks about last week’s US airstrike on a rebel brigade that killed at least eight civilians.

The US airstrike was on a factory established by Jaish al-Sunna to make mortars and ammunition, but the victims included five sisters and refugees from Homs.

After a summary of the incident, the doctor testifies about the civilian casualties — “no fighters, almost all women and children” — and then puts out a message in English: “Do you think these sisters are terrorists?…Do you think you can destroy Al Qa’eda by killing five sisters?”

Islamic State fighters have beheaded a leading Syrian scholar in the historic city of Palmyra, according to the State head of antiquities.

The body of Khaled Asaad, 82, was hung in a main square on an ancient column which he had restored, his family told the State official. He had been detained and interrogated for more than a month.

The scholar had worked for more than 50 years as head of antiquities in Palmyra, famed for its Roman ruins. He was known for publications in international archaeological journals and had worked for decades with US, French, German, and Swiss missions on excavations and research.

The Islamic State reportedly said in a statement that Asaad was an “apostate” who was the chief of “idols” in Palmyra and had represented Syria in “infidel conferences”. He was also condemned for visits to Iran and contacts with the Palace of President Assad.

The Islamic State captured Palmyra, an important trading post on the Silk Road, in late May. The militants have threatened to destroy artifacts as idolatrous, and in June, they blew up two ancient shrines that were not part of the Roman-era structures.

Typhoid has broken out in the Yarmouk camp in south Damascus, home to about 15,000 Palestinians who have faced siege, starvation, and fighting over the last three years.

UNRWA, the UN agency for Palestinian refugees, said Tuesday that there were at least six confirmed cases.

The agency’s spokesman Christopher Gunness said staff gained access to Yalda, east of Yarmouk, for the first time since June 8 and established a mobile health point.

Activists reported in late July that typhoid had spread through several areas in south Damascus, due to a lack of potable water, especially after the Islamic State closed off supplies. They said residents were relying on wells dug before the 2011 uprising or hand-dug wells, while regime shelling had damaged the sanitation system.

UNRWA noted “credible reports” of the outbreak with cases in Yalda, Babila, and Beit Sahem.

The Yarmouk camp, which hosted 160,000 Palestinians before the conflict, has been under siege by regime forces since July 2013. The Islamic State attacked in April, taking over part of the area.

The Assad regime has turned on UN envoy Staffan de Mistura after he criticized the Syrian military’s mass killing of civilians in the Damascus suburb of Douma on Sunday.

De Mistura said in a Monday statement that the airstrikes were “unacceptable in any circumstances”.

Without specifically referring to the Douma attacks, which killed at least 112 people and wounded more than 550, the Foreign Ministry said de Mistura’s “bias” was apparent in his latest remarks, which were “far from objectivity and facts” and based outlets hostile to Syria.

“We hoped that the UN envoy would have condemned the shelling carried out by the armed terrorist organizations on the cities of Aleppo, Latakia, and Daraa,” the Ministry said.

It also said de Mistura had failed to condemn rebels for cutting off water and electricity in Aleppo, and did not mention killings by the Islamic State, Jabhat al-Nusra, and “other al-Qaeda-linked organizations in Syria.

The Assad regime has been favorable towards de Mistura since his appointment in July 2014, supporting his now-dormant “freeze” plan to halt fighting in Aleppo city