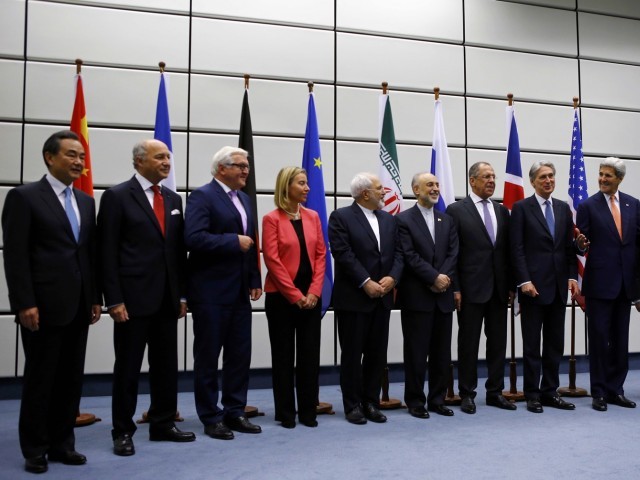 PHOTO: Ministers of Iran and the 5+1 Powers at the signing of the July 14 nuclear agreement

The Rouhani Government has held its line against MPs demanding a vote on the July 14 nuclear deal between Iran and the 5+1 Powers.

On Sunday, more than 200 of Iran’s 290 MPs signed a statement insisting that the Majlis confirm the agreement. The Government has maintained that endorsement is in the hands of the Supreme National Security Council.

On Tuesday, President Rouhani’s senior adviser, Mohammad-Baqer Nobakht, told a press conference, “According to the law, this agreement should not be sent to Parliament….[This] does not require the approval of any institution other than the Supreme National Security Council.”

Nobakht said that “Iran had the upper hand” in the nuclear negotiations, and he emphasized that the Government would not allow the US to exploit the agreement to stir unrest in Iran.

The Supreme Leader had warned in a speech on Monday that “the opposite side in the nuclear negotiations was seeking to clinch an agreement…to find a way to infiltrate the Islamic Republic”.

Ali Akbar Salehi, Iran’s lead technical negotiator, echoed that the Joint Comprehensive Plan of Action “is not a treaty or convention that should go to Parliament”, while saying the deal was proof of the success of the principle of the Supreme Leader’s “guardianship” and Iran’s “model of resistance”.

He added, “The implementation time depends on Iranian actions….The faster we fulfill our obligations, the faster sanctions will be cancelled.”

Addressing students in Tehran, Motahari said, “I believe that even Prophet Mohammad cannot sentence one person to house arrest without a trial. They [the opposition leaders] should firstly face trials to determine, for example, why a person who was Iran’s Prime Minister for eight years [Mousavi] protested in such a way.”

Mousavi “lost” the disputed 2009 Presidential election to Mahmoud Ahmadinejad, and Karroubi was also a candidate. Mousavi’s wife Rahnavard is a leading academic, artist, and activist.

The three were put under strict house arrest in February 2011 amid regime fears of renewed protests.

Challenging the repression of dissent, Motahari said, “Critics and opposition should not be treated as those who wants to overthrow the system.”

Defense Minister: We Will Soon Get Russian S-300 Anti-Aircraft Systems

Dehghan said on National Defense Industry Day on Tuesday, “All changes that have been made by the Russians over these years [to missiles] will be implemented on the S-300 system that is going to be delivered to Iran, and we will receive the system soon.”

The Minister said that the Islamic State will receive four S-300 missile “battalions”. He said the deal would be confirmed in Russia next week, but he did not say when the systems would be delivered.

Iranian officials have repeatedly said this year that the delivery of the S-300s would be made. Russia suspended the contract in 2010; however, President Vladimir Putin lifted the ban in April.

Still, Moscow has held back any confirmation of the provision of the S-300s, saying it will not occur in 2015.

Former President Hashemi Rafsanjani has launched a new challenge within the regime, implicitly responding to the Supreme Leader as well as to his critics.

Using a meeting with former prisoners in the 1980s Iran-Iraq War, Rafsanjani hailed Iran’s ability to deal with issues in the Middle East and Central Asia in a “peaceful manner”.

The statement continued the promotion of the Rouhani Government’s strategy of “engagement”, despite the latest speech by the Supreme Leader portraying confrontation over the situations in countries such as Iraq, Syria, and Yemen.

Rafsanjani has favored contacts with Saudi Arabia in an attempt to defuse some of the conflicts. His intervention comes amid a Russian-Iranian effort to get the Saudis to meet with Syria’s embattled Assad regime.

The former President also aimed at those who are trying to block his candidacy in next February’s election to lead the Assembly of Experts, which selects the Supreme Leader: “Even though the political and economic condition of the country is improving, some ignorant and idiots wants to have conflicts inside Iran.”

Last Friday, Ayatollah Jannati, the head of the Guardian Council, used the Tehran Prayer to declare, “Some people want to force themselves into the Assembly of Experts and deviate this assembly from its correct path….We should stand against them….The same people pressured Judiciary to stop some legal verdicts.”

Jannati then thanked the judiciary for the 10-year sentence on Rafsanjani’s son Mehdi Hashemi, who entered prison earlier this month over the fraud charges.

Rafsanjani closed his statement with a challenge to those, including opponents of the July 14 nuclear deal, who said sanctions had had no effect on Iran and upheld the Supreme Leader’s concept of a “Resistance Economy”: “Some people mistakenly said that these sanctions made us pursue a policy of resistance. However, making our country poorer is not resistance.”