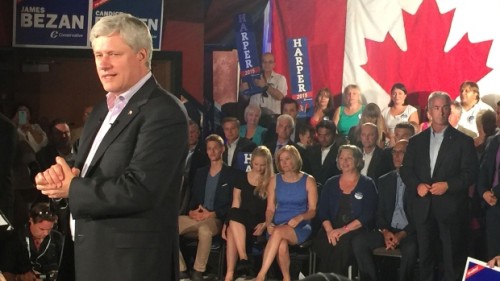 There can hardly be a starker case of a government using the threat of terrorism for political gain than the recently called Canadian federal election. The campaign has already begun to revolve closely around terrorism — and the government has shown few scruples in its push to politicize the issue.

Canada’s recent experiences with domestic terrorism have greatly tilted the country’s political landscape. On October 22 2014 Nathan Cirillo, a Canadian soldier guarding the country’s National War Memorial was murdered by a radicalized man, Michael Zehaf-Bibeau. Zehaf-Bibeau then managed to gain entrance to Canada’s Parliament building, where he was shot dead.

That attack followed the less publicized killing two days earlier of another Canadian soldier, Patrice Vincent, who was run down by a car driven by another radicalized man who was later shot and killed.

Cirillo’s death in particular triggered a national outpouring of emotion. What was strangely forgotten was that Canada had previously experienced far worse incidents of terrorism, and that these were the only domestic Canadian deaths due to terrorism in the previous 20 years. In comparison, between 1988 and 2009, 47 people were killed in collisions with animals in the province of British Columbia alone.

In response to the attacks, Stephen Harper’s Government promised strong new anti-terrorism measures, and delivered them in January 2015 in the form of Bill C-51, or the Anti-Terrorism Act.

C-51, which became law in May, has been deeply controversial. It drew widespread criticism from civil libertarians and academics, 100 of whom signed an open letter calling for the legislation to be amended or withdrawn (I was one of the signatories).

Criticism focused on a number of provisions within C-51, including allowing the Canadian Security Intelligence Service to carry out disruption operations against suspected terrorists, lowering the level of evidence needed for the police to make preventive arrests, and criminalizing the glorification of terrorism.

The critical attention generally centred on C-51’s effectiveness and its impact on civil liberties, but not on its clear political dimension. The legislation forced the main opposition parties to take a stance: the New Democratic Party opposed the bill, while the Liberal Party, much to the chagrin of some of its members, endorsed it — albeit with a promise to amend the law should it form a government.

Although a majority of Canadians supported C-51, the numbers declined over time. On the face of it that validates the NDP’s opposition –– but that diagnosis rather misses the reality of politics in Canada.

Canadian politics is highly divided, an effect compounded by declining voter turnout. In the 2011 election, Harper’s Conservatives won their long sought-after parliamentary majority with just under 40% of the vote on 61% participation.

Harper and his party have long understood that to win in such an environment requires getting your core supporters to come out and vote. And what better way to encourage their presence in the voting booth than by emphasizing the grave threat of terrorism, the need for a strong response, and the supposed weakness of the opposition?

This is not pure cynicism on my part. Since January 2015, and indeed well before that, there has been considerable evidence that the Harper government is deliberately using the spectre of terrorism and counter-terrorism for political ends.

On its Facebook page, the Conservative Party invoked a threat by the Somalia-based al-Shabaab to attack western shopping malls, including the West Edmonton Mall in Alberta, as an opportunity to raise funds. The Minister of Public Safety, Stephen Blaney, invoked the Holocaust in defence of C-51. A Conservative Member of Parliament sent out a survey to his constituents about C-51 containing two options: “I agree with my MP Lawrence Toet. We must take additional action to protect Canada from terrorism” and “I disagree. Terrorists are victims too.”

Government officials involved in security were told in an email by aides to Foreign Minister Rob Nicholson to supply “three MINA [ministerial] statements to the media regarding security in the context of terrorism each week.” A Conservative party attack ad uses Islamic State imagery and music to attack Liberal leader Justin Trudeau prompting suggestions that it doing so it may have violated its own C-51 law.

A Conservative MP linked the death of a reservist in training to Canada’s being a “nation at war, explicitly targeted by an enemy that is setting a new standard in barbarism.”

At an election rally on August 9, Prime Minister Harper promised yet another new anti-terrorism law, this time to make it illegal to travel to certain countries associated with terrorism, such as Syria and Libya, despite the fact that thanks to 2013 Harper government legislation it is already a crime to go abroad for the purposes of terrorism or terrorism training.

And all the while, across assorted statements, a variety of Conservative ministers regularly invoke the term “jihadi” and war imagery to describe the threat facing Canada. It later emerged that Public Safety Minister Blaney’s office ignored expert feedback recommending a change from “jihadist” to “terrorist” in a statement released in January. That feedback reflected the advice put forward by the Royal Canadian Mounted Police in 2012:

By referring to extremists as jihadis we effectively recognize their actions as being in the path of God and, therefore, legitimate. And in opposing jihad and its practitioners, we risk characterizing ourselves as the enemies of Islam.

But, of course, that implies that Canada’s politicians are actually having a debate about how to make Canadians safer, and not merely pursuing a political target.

The Conservative Party and the Harper government are known for their remarkably tight control over political messaging; the charged rhetoric and repeated terrorism references coming from the Prime Minister, Cabinet ministers, MPs, and the party are not coincidental.

Harper’s Conservatives understand that in a first-past-the-post electoral system with dwindling turnout, to paraphrase the words of Abraham Lincoln, you only need to scare some of the people some of the time in order to win.