Syria Testimony: Let’s Go Back to the Beginning…. 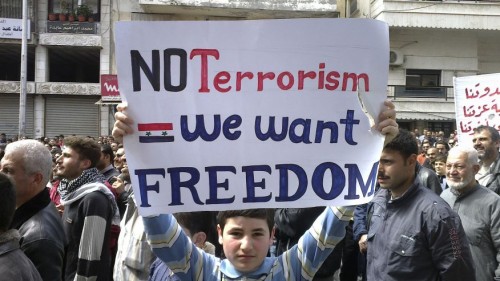 PHOTO: Boy holds up poster during a protest in Baniyas in western Syria, April 2011

Journalist and photographer Yasmin al-Tellawy writes on her blog A Human Perspective:

I started going to Syria from the beginning of the revolution. Looking back, it was the beginning of me truly living. I could never put into words the enlightening feeling there is of being surrounded by such an abundance of love, strength and passion in life.

Mid-2011 to early 2012: While it was the beginning of a horrendous continual spiral downwards for Syria, it was also a time of unity, love, welcoming and laughter, emotions I was blessed to be a part of. Looking back at the Syria I enter now, I truly appreciate every moment in the beginning with all I got to experience.

I entered the country through routes unimaginable, mountain terrains across Lebanon, tunnels, running for your life through land-mined territories — along with the paths that felt like a walk in a park, which were somehow more worrying to me knowing that a war zone was a few footsteps away….

When I finally reached the other side, I would be greeted with smiles, hugs, kisses, pulled in every direction by the locals of whatever village in which I arrived. It was a joyous time in many ways. I would walk through the streets with the locals learning all about their life, discovering everything with little worry of those surrounding me. The shabiha [pro-Assad militia] were very present, but I felt at such ease and comfort always of the men of the newly formed Free Syrian Army. This was a time when there was true unity across Syria in opposition to the government forces.

There was a beautiful energy among the people, even with the murders and imprisonments happening across the country.

The streets would be full of cheering in the newly liberated areas, children playing in the streets as they should be, and then there were the demonstrations. What a wondrous time that was.

I am sure you know what I am talking about if you were there. You remember that energy, the songs, the dancing, the chanting, the children clapping and dancing with their parents, handmade flags whisking through the crowds, in the villages the dry rice would be falling over you as the women sang and threw it over the crowds in joy.

When I would arrive I would be treated like royalty! The people had so much love to show me, the welcoming was incredible. Most of my footage was terribly shaky as I couldn’t stop myself from having a little dance as I weaved my way through the crowds. The drums would beat all around me and the sound of freedom songs filled the air. My ribs would ache continually as I traveled for weeks and months across the country, and the laughter would be never-ending. I wish I had all my hard drives with me right now to share so much more.

Most of my travel would be done on the back of a pick-up truck or a motorcycle, and at times whatever makeshift means of travel could be put together. I could travel across open roads freely in many ways while in FSA territory. There was a great sense of freedom: I could feel the wind against me as we traveled and I could film at ease with the locals, welcoming nature.

We feared shelling, warplanes, and snipers loyal to the Assad regime, but looking back in comparison to what has become now, the escalation is absolutely shocking.

Now don’t get me wrong, there was tremendous tragedy, pain across the country that will always haunt, human life lost with no just reasoning. While the demonstrations would take place, there would be those times when Government loyalist forces would storm the area and kill as many as they could in their path of terror. Indiscriminate bombings, civilians murdered continually, loved ones constantly disappearing….

I don’t wish to go into all of that however, not in this moment. I mention this just in case anyone reading this things it was some sort of fun party in Syria: it was far from it. The realities were ridiculously dangerous and the war crimes unbearable to recall, as they continue to be.

My reason for writing this is simply because I have continued to work in Syria to the day that I write this. I have witnessed every step of the revolution, and the chaos the country has now descended into. Things are very different as we all know; week by week things change fast on the ground. Sadly the atrocities continue in vast numbers, with many different groups committing crimes now. Sadly I am not free to roam the streets and talk with locals as I wish. Sadly I cannot be known as a journalist or even humanitarian upon working with my charity there, and each time I enter the country, only my eyes show, knowing there are few I can trust.

I get such an overwhelming sense of sadness in these moments I travel. From what was once “freedom” in many ways to the need to stay invisible now. I feel weighed down at times with sadness from what has become of Syria lately and sit in this moment and recall so many cherished memories and cherished souls I have encountered.

I share this because I miss that unity. I miss those days — although I wish those days never had to exist — but I miss the beauty and glow of the Syrian people.