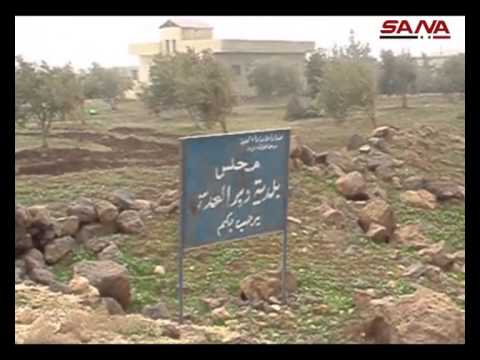 LATEST: Battle South of Damascus in Flux, with Territory Swapped Back and Forth

A major story is building in southern Syria, with conflicting accounts over whether a regime counter-offensive in Daraa and Quneitra Provinces has succeeded in taking territory.

However, there may be an even more significant development — it appears that President Assad is now relying on Hezbollah, Iranian, and other foreign fighters for his ground battles.

On Wednesday, the regime and opposition continued to put out competing claims that they occupied the town of Deir Addas, south of Damascus. State media declares, “The Syrian Arab Army established control over the strategically important area…as a part of a broader military plan to clear the area of terrorist organizations and agents of the Israeli enemy.”

However, both the Free Syrian Army and Jabhat al-Nusra said Deir Addas has been recaptured after a brief regime occupation, led by Hezbollah and Iranian fighters. They also said that the Hezbollah-led offensive had failed to take nearby Kafr Shams.

The FSA that they had captured four tanks, killed 20 troops, and captured 30 others.

Heavy casualties were also reported among the regime’s foreign fighters in al-Habbariyah, and the FSA said last night that another 40 regime troops had been slain as they tried to flee from an attack near Deir Makir.

Fighting to the west of Kafr Shams, at Masharah (see map):

The rebel accounts, supported by pictures, consistently say that Hezbollah, Iranian fighters, Iraqi militias, and other foreign units are now providing most of the regime’s forces in the southern counter-offensive. The Free Syrian Army appeal for help, posted by Assad supporters, refers to the new threat of “professional armies”.

[This is] not only in the south. Hezbollah and Iran have led in Aleppo [Province] too for months — also in Hama Province.

It is probably only in Deir Ez Zor [Province in eastern Syria] that the Syrian Arab Army is still involved [in leadership of forces].

Asked if this was because the Syrian army is now weakened after four years of conflict, the activist replied: “Not only weak. Not trusted [by the Assad regime].”

Battle South of Damascus in Flux, with Territory Swapped Back and Forth

Reports on the regime counter-offensive south of Damascus continue to be confused and conflicting, but they point to territory passing back and forth between the opposition and Assad forces, led by Hezbollah and Iranian fighters.

Both State media and opposition activists continue to claim control of Deir al-Addas, at the center of the 20-km (12-mile) front across southern Damascus and northern Daraa Provinces. Fighting is also continuing in and near Kafr Nasij, Deir Makir, and al-Habarna.

Other activists have said that the opposition failed to retake Deir al-Addas, but did retake Habariyah and repelled regime attacks on Himrit and Sultaniya.

State media have not supported their claims with footage from Deir al-Addas, indicating that control of the town is still contested. An EA source supports this, “Fierce clashes in mud and snow, front lines moving back and forth.”

The situation is further clouded by an attempted media blackout by rebel brigades on the state of the battles.

The Al-Furqan Brigade, on a frontline closer to Damascus:

Rebel Leader Alloush: Demands Can Be Sent to Arab League and UN to Halt Regime Attacks Near Damascus

Zahran Alloush, the leader of Jaish al-Islam and military commander of the Islamic Front, has proposed delivery of rebel demands to the Arab League and the UN in an attempt to halt regime bombing of opposition-held areas near Damascus — and thus rebel rocket launches on military positions in Damascus.

In a phone call with Syrian opposition leaders, Alloush said he would authorize the Syrian National Coalition to deliver the demands. The rebel commander said he was also seeking the humanitarian delivery of food and supplies to the opposition areas, long besieged by the Syrian military.

Alloush said the Assad regime would have 48 hours to accede to the demand; otherwise, the rebels will launch “1000 rockets” on the military positions in Damascus.

See Syria Daily, Feb 11: Assad Says “We Have No Barrel Bombs” as 100+ Are Killed By Airstrikes in Douma

In the latest issue of its magazine Dabiq, the Islamic State posts a lengthy article justifying its recent execution-by-burning of the Jordanian pilot Moaz al-Kasasbeh.

The article, accompanied by a graphic image of al-Kasasbeh dying in a cage, maintains:

In burning the crusader pilot alive and burying him under a pile of debris, the Islamic State carried out a just form of retaliation for his involvement in the crusader bombing campaign which continues to result in the killing of countless Muslims who, as a result of these airstrikes, are burned alive and buried under mountains of debris.

Al-Kasasbeh was captured on December 24 after he crashed or was shot down during a mission for the US-led coalition against the Islamic State in northern Syria.

The jihadists say that Islamic scholars who hold that Prophet Muhammad banned punishment by fire are “deviants” showing “dishonesty in conveying the truth”.

The article cites five examples of execution by fire and concludes:

We ask Allah to take revenge for the Muslims and the mujāhidīn, and rain fire and destruction upon the kuffār [unbelievers] and murtaddīn [Muslims who have left Islam] wherever they are.

The chairman of the Consumer Protection Association has warned of the effects of the continuing fall of the Syrian Pound, saying it would be a mistake to remove welfare subsidies and not increase the salaries of Government employees.

The chairman said a government monthly salary of SP20,000 now needs to be at least SP90,000 to meet daily expenses.

As the currency has fallen, the price of food has risen. For example, the cost of frozen meat has increased almost 40% since the autumn.

The Government has also cut subsidies on heating oil, diesel fuel, and petrol as well as bread.

State media says the two men discussed “new details” in de Mistura’s plan for a freeze in fighting in parts of Syria. 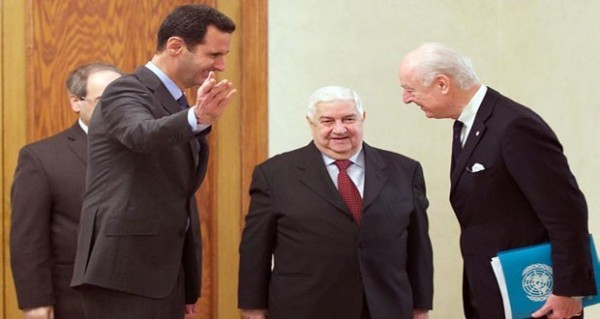 The Assad regime initially supported de Mistura’s proposal for a halt to the conflict in the divided city of Aleppo. However, it balked when the opposition asked for the plan to be extended throughout northwest Syria, effectively consolidating rebel control of much of the area.

On Wednesday, according to State news agency SANA, Assad “reiterated Syria’s commitment to supporting any initiative or idea that helps to resolve the crisis and to preserve the lives of citizens and State establishments”.

However, no information was given on the “new details” of de Mistura’s proposals, with the envoy rebuffing journalists’ questions. He said he would submit a report to the UN Secretary-General and participate in a Security Council meeting next Tuesday.

Assad also pushed his “terrorism” theme, calling for a halt to foreign funding of rebels.

He said he is currently working towards reducing the violence affecting the Syrian people and towards delivering humanitarian aid to them in a controlled manner and at an increasing rate, adding that he will submit a report to the UN Secretary-General and participate in a Security Council meeting on Syria on February 17th, giving no further details.