Iran Daily, Feb 12: After the Anniversary March, It’s Back to Nuclear Talks and Economic Problems 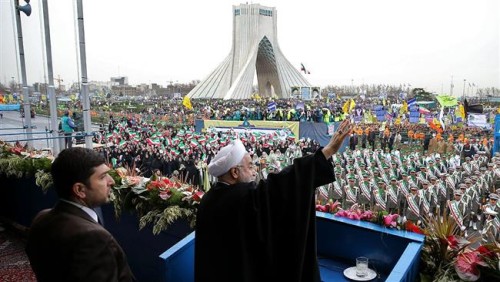 Iran’s State media put out its standard declaration of “millions” of Iranians turning out on Wednesday for the anniversary of the 1979 Islamic Revolution, and images of the march to Tehran’s Azadi Square backed the narrative of support for the regime.

Beyond the pro forma story, the notable development was President Rouhani’s confrontation of the political and economic difficulties facing Iran.

As he marched to Azadi Square, Rouhani referred to the troubled economy and ongoing nuclear talks with the 5+1 Powers (US, Britain, Germany, China, Russia, and France), assuring, “Iranians are determined to prevail over all problems.”

In his speech in the square, the President — who has faced a series of challenges from hardline opponents — appealed for unity: “Diversity of opinion, taste, and analysis is permitted, but in the interests of our nation we all speak with one voice — today just like 36 years ago- we still shout: independence, freedom, and the Islamic Republic.”

Rouhani then tried to recast the problems for Iran’s economy — hindered by issues of production and investment, rising unemployment, restricted oil exports and falling revenues, and a shaky currency — as a recovery: “With pride I announce to the Iranian nation that we have had a 4% growth in the first six months of this year [March-September 2014].”

The President did not mention that the “4% increase” is a somewhat artificial claim, given that it is measured against a fall of almost 5% in GDP in 2013. Instead he pressed on: “The country’s industry has grown 6.5%, mining grew 10.5%, and business grew 5.4% in the first six months….In terms of improving the climate for business, Iran has climbed 22 spots in the world rankings.”

Rouhani also was careful in handling the figures about Iran’s oil exports, still 40% lower than in 2012 amid US-led sanctions.

Iran’s oil production was about 4.2 million barrels before the US and Europe stepped up their sanctions in 2012.

Speaking about the ongoing nuclear talks, which are seeking a comprehensive settlement by July 1, the President maintained:

Those who state that Iran has come to the negotiations due to sanctions are uttering lies. Iran has sat at to the negotiating table not as a result of pressures but for the sake of logic and for the establishment of peace in the region and the world.

Repeating his call for a “win-win” resolution, Rouhani indicated the barrier to a deal was the US refusal to countenance the removal of major sanctions within six months of an agreement: “If Iran shows transparency in its peaceful nuclear program within the framework of the international regulations, the other side should also end the illegal sanctions and this will benefit both sides.”

Speaker of Parliament Ali Larijani put out the same line in his speech in Isfahan:

The US and the 5+1 Powers can reach an agreement (with Iran) if they avoid two things; first, the final agreement should be based on the international rules; second, the Western states shouldn’t seek deception or imposition of special norms for Iran since the Iranian nation is familiar with these tricks and will reject them.

And the Supreme Leader’s top advisor, Ali Akbar Velayati, offered support for Rouhani and Foreign Minister Mohammad Javad Zarif, saying that Zarif’s performance in negotiations had been “very successful” and that Ayatollah Khamenei had approved the approach to the discussions and their progress.

Hardliners are continuing to lash out at former President Hashemi Rafsanjani, as his candidacy to lead the Assembly of Experts was confirmed.

Rafsanjani, the mentor of President Rouhani, was chair of the Assembly for 2007 to 2011. He was then defeated by Ayatollah Mahdavi Kani, who died last October after a heart attack and a three-month coma.

The election to lead the Assembly, which chooses and can nominally replace the Supreme Leader, has been set for March 10.

Ayatollah Mesbah Yazdi, the leader of the hardline Endurance Front, said, “[Rafsanjani] thinks that he has caused the revolution and even worse he thinks that he was the one directing Imam Khomeini….These are Satanic temptations and hence this is why the Supreme Leader has said the sedition begins with the elites.”

As Rafsanjani marched in Wednesday’s rally for the anniversary of the 1979 Revolution, he was greeted by both cheers — “Peace be upon Khamenei, peace be upon Hashemi — and boos. Supporters