Syria Daily, Feb 11: Assad Says “We Have No Barrel Bombs” as 100+ Are Killed By Airstrikes in Douma 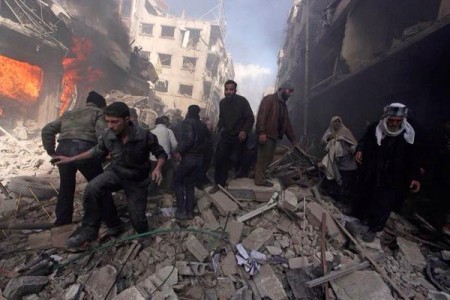 UPDATE 1715 GMT: The rebel faction Jaish al-Islam has said that it will fire more rockets at military targets inside Damascus, in response to the deadly bombardment of opposition-held areas near the capital.

Jaish al-Islam, which has launched more than 150 rockets in two waves of attacks on Damascus in the past two weeks, said that this time there will be “no warning” of the launches.

On the earlier occasions, the rebels have warned civilians to avoid military positions and asked them to observe a curfew.

In a televised interview, the head of Jaish al-Islam, Zahran Alloush, said no warning would be given because the regime exploited the previous two rebel announcement by shelling civilians in between “successful rocket attacks that only hit legitimate targets, not harming the people of Damascus”.

As the BBC featured President Assad’s denial on Tuesday — “We have no barrel bombs” — the death toll from Syrian airstrikes in and near Damascus soared to more than 100 in a day, and close to 250 since last Thursday.

Douma, northeast of the capital, has suffered most from the attacks. Activists said that more than 100 people were killed on Monday, as bodies were finally retrieved from rubble, and the Local Coordinating Committees said another 38 died in and near the town on Tuesday.

Syrian forces have tried for months to break the rebels in Douma, captured by the opposition in autumn 2012. In the last week, they have stepped up bombing and tightened their siege. On Thursday, at least 76 people were killed, even as rebels tried to deter the airstrikes by launching rockets at Syrian military positions in Damascus.

The leading rebel faction in Douma, Jaish al-Islam, warned on Tuesday that it would renew the rockets — “we will bring pain to the criminals of the regime” — if the bombardment did not stop.

In a brief commentary on his interview with Assad, the BBC’s Jeremy Bowen writes, “Two or three years ago, I saw the results of what must have been [a barrel bomb] in Douma.”

However, the BBC, which continues to headline the interview on radio and TV, has no news of Douma on its website this morning.

Rebels claim that they have pushed back the regime’s counter-offensive south of Damascus — the Free Syrian Army said that Deir Addas has been recaptured after Assad’s forces, including Hezbollah and Iranian fighters, briefly occupied the town. 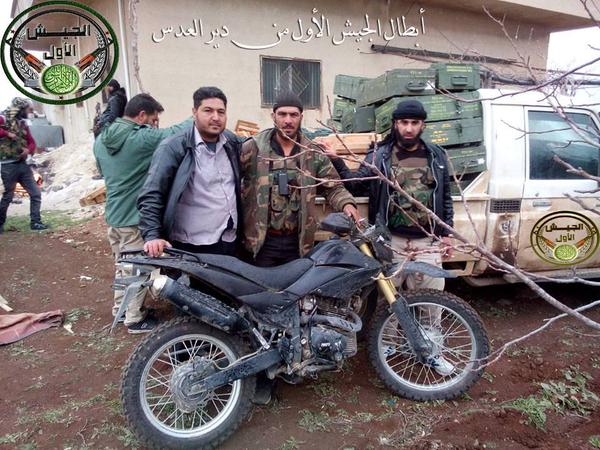 Jabhat al-Nusra has also put out the news, as well as claiming that the Hezbollah-led attack on Kafr Shams was repelled:

Rebels are also claiming that they trapped Hezbollah and Iranian fighters in al-Habbariyah, attacked them from all sides of the times and inflicting heavy casualties: “Their dead bodies filled the streets.”

There is even a claim of a “Rapid Reaction Brigade” of the Iraqi armed forces fighting alongside Assad troops.

Opposition Activists Kidnapped by Gunmen in Damascus Suburb of Erbin

Activists on the local committee of opposition-held Erbin, near Damascus, have been abducted by gunmen.

The Local Coordination Committees said six workers were taken from the Erbin office. One was later released.

Equipment was also seized and destroyed. The released activist said his colleagues “are being held in isolation from each other, in solitary confinement”, according to the Erbin committee.

The LCC said the gunmen were “believed to be loyal to Jaish al-Islam”, a leading rebel faction. Jaish al-Islam spokesman Islam Alloush said the activists were “detained by the United Judiciary”, but he had no further information on the case or any charges.

Abdurrahman Saleh of Jaish al-Islam added, in a comment to EA:

These claims [of Jaish al-Islam responsibility] have always been repeated, and we always deny any relationship to the incident. There are dozens of revolutionary groups in East Ghouta — add to them ISIS [Islamic State] and regime cells, but they insist on accusing Jaish Al Islam.

In December 2013, four leading activists in nearby Douma — including Razan Zaitouneh, one of the founders of the LCC — were abducted by gunmen. They are still missing.

There are conflicting accounts of the state of the regime’s counter-offensive in Daraa and Quneitra Provinces in southern Syria.

Pro-regime accounts, as well as Hezbollah’s Al Manar TV, are claiming advances in a widespread assault.

However, opposition accounts are claiming that the counter-offensive, seeking to reverse insurgent gains of the last month, has been repelled.

Jabhat al-Nusra claims the capture of 30 prisoners in the ambush of a supply convoy:

Among the conflicting accounts, what is striking is evidence that many — and possibly most — of the regime forces are Hezbollah and Iranian fighters.

Al Jazeera English reports that thousands of Syrian refugees are homeless after the Lebanese army cleared the area along the Syrian-Lebanese border last week.

The clearance reportedly affects more than 30 informal settlements housing about 7,000 Syrian refugees and labourers in Wadi Anjar, in the foothills of Lebanense mountains. The action was taken as fighting escalated near Zabadani, on the Syrian side of the border.

“We have nowhere to go any more; we have no idea where we’ll be sleeping tonight. What are we supposed to do?” Abu Ahmad, a refugee from Deir Ez Zor Province, asked Al Jazeera:

The Lebanese army came in last night and broke everything; our water tanks, our shelters. Where are we supposed to let our children sleep? Shelter is the most important thing.