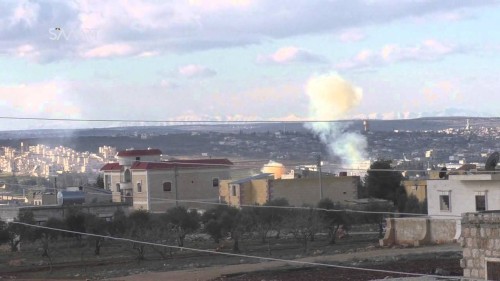 LATEST: 5 US Air Attacks near Kobane on Thursday-Friday

UPDATE 1145 GMT: Latest reports indicate that Jabhat al-Nusra has ended its “first phase” of operations, pulling back from the center of Nubl to positions on the edge of the village which can be more easily defended.

Jabhat al-Nusra claim they killed 65 Syrian militiamen and destroyed a statue of Hafez al-Assad, the former President and father of Bashar al-Assad — possibly the one in this photograph which regime supporters have been spreading to show regime “victory”: 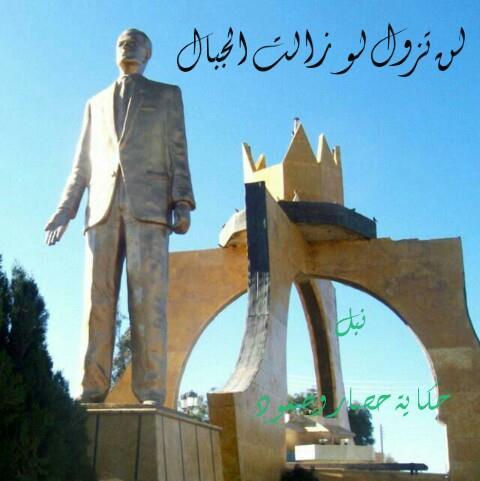 It is expected that al-Nusra will bring in reinforcements for a second phase of attacks. Meanwhile, it is unclear whether the insurgents have pulled back from the territory, south of Nubl, on the main road connecting the village with Zahraa.

Scenes from the fighting:

The regime’s aerial operations have escalated with the end of this week’s snowfall — the skies are cloudy but with sunshine.

UPDATE 0745 GMT: Jabhat al-Nusra claims that it has advanced through the night. It says it now holds 50-60% of Nubl and parts of Zahraa. The insurgents are also threatening to cut the links between the 2 villages, south of Nubl.

Activists are also reporting the destruction of a regime convoy of reinforcements, travelling on the road from Efrin.

However, pro-Assad accounts are claiming the defeat of the insurgents: “Zahraa is now quiet and safer then the streets of Paris. Everyone has high morale but this is peppered with some sadness due to our martyrs.”

Insurgents, led by the Islamist faction Jabhat al-Nusra, appear to be close to a major victory north of Aleppo.

After surrounding the villages for months, the insurgents took over much of Nubl on Thursday and attacked nearby Zahraa, capturing its industrial area in the south.

Jabhat al-Nusra also claimed that they reached the base of Tel Nubl (see map), the strategic high ground of the village, destroying Nubl’s communications tower.

The villages are vital for the regime as bases for attacks on the opposition throughout Aleppo Province and northwest Syria. Their capture would relieve pressure on insurgents in other areas, notably Aleppo city, and open up the possibility of further opposition advances throughout the northwest.

Victory would follow insurgent success earlier this week closer to Aleppo city. The opposition captured territory to the north and east, countering regime attempts to cut a main route to the insurgent-held eastern section of Syria’s largest city.

See Syria Feature: Insurgents Hit Back at Regime and Regain Territory Near Aleppo

On Thursday the insurgents, including Jabhat al-Nusra and units of the Free Syrian Army, fired more than 500 mortars, rockets, and artillery shells at Nubl and Zahraa before al-Nusra’s ground assault.

The insurgents believe about 3,000 to 4,000 militia and foreign fighters, as well as some regular Syrian troops, are in the villages. Unconfirmed claims of casualties ranged from a few dozen to more than a hundred.

Regime supporters admitted that Jabhat al-Nusra had entered Nubl, but tried to counter that the attacks had been repelled. They posted photos claiming to be of captured insurgent tanks and declared, “At least 50 Al-Nusra Front militants were killed…including a number of foreigners from Chechnya and Kazakhstan” as the Syrian Air Force carried out “multiple airstrikes”.

Tonight: Photos from Nubbol & Zahraa of the tanks taken from Alnusra after a victorious confrontation. #Aleppo #Syria pic.twitter.com/vFBDkMRVaO

The regime did try to check the offensive from the air, with attacks on the front line at the Nubl industrial complex and in nearby Mayer. However, the warplanes were limited by heavy snow.

With the regime’s advantage of airpower restricted, the defeat of the insurgent offensive may depend on other factions. The opposition is also facing the Islamic State in northeast Aleppo Province. An even greater challenge are hundreds of fighters of the Kurdish YPG, who are to the north and west of Nubl and Zahraa — the Kurdish units have supported the Assad forces with supplies, including from regime airdrops which landed in Kurdish areas, and allowed convoys to reach the villages.

Activists: #JAN informed the #YPG that they will destroy any military convoy if they will send to support Regime in #Nubbol/#Zahraa. #Syria

5 US Air Attacks near Kobane on Thursday-Friday

The US military says it carried out five airstrikes on the Islamic State inside Syria on Thursday and on Friday morning.

The attacks were all near Kobane, the Kurdish center in northern Syria which has been under Islamic State assault since September. US officials said a “fighting position” and two tactical units were hit, and a building and seven fighting positions were destroyed.

Zahran Alloush, leader of Jaish al-Islam and the military head of the Islamic Front bloc, has defended operations against the insurgent faction Jaish al-Umma as part of a drive against corruption.

Jaish al-Umma, based in East Ghouta near Damascus, effectively disbanded last week after Jaish al-Islam detained some of its members.

Alloush told citizen journalists that Jaish al-Umma contained “corrupt armed groups” and said, “Participation in the revolution does not grant anyone immunity from accountability.”

The commander added the accusation that some members of Jaish al-Umma had pledged allegiance to the Islamic State: “We captured 12 Islamic State elements in its headquarters.”

Video: Insurgents Moving Through the Snow Near Mount Hermon on Lebanese Border

Regime Discussions Continue with Iran Over Economic Crisis and Reconstruction

Qassemi, a former Oil Minister and now head of the Iranian-Syrian Economic Relations Development Committee, met with al-Halqi on Sunday and with President Assad on Monday.

The regime is seeking a renewal of Iran’s line of credit which has propped up the economy, especially with funding of food and energy supplies and with reconstruction projects. Tehran’s current line of $3.6 billion, arranged in July 2013, will soon expire.

Syrian State media repeated the general description of the talks in its article on the latest Halqi-Qassemi meeting:

[The Prime Minister] underlined the positive outcomes of trade and economic deliberations between the two sides over the past few days as they contribute to opening new cooperation prospects between the two countries….

Qassemi said that Iran will not hesitate to provide all commercial and economic support to Syria and its people, expressing confidence in the latter’s victory.

Means of implementing what has been agreed upon to establish joint projects in electricity, oil and transport, health, agriculture, communications and medical researches, in addition to providing food supplies, fuel and factory equipment spare parts, were also discussed.