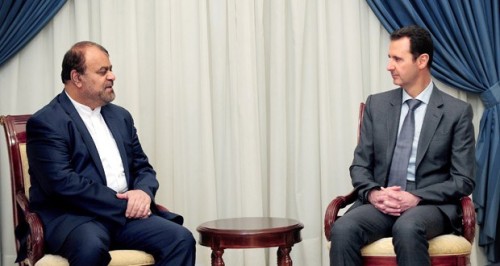 LATEST: “2 to 3 Hours to Cross 20 Kilometers” in Damascus — Plus Threat of Detention — Because of Regime Checkpoints

President Assad has held his second meeting in two weeks with a high-level Iranian official, as Syria continues to appeal for Iran’s continued economic support.

State media gave a general description without details of a conversation over “the need for optimal investment in the available opportunities in various vital sectors to benefit both countries” and “to facilitate procedures and overcome obstacles hindering the development of economic cooperation”.

According to Syrian news agency SANA, Qassemi said “Iran is committed to continue providing support and expertise to empower Syria on the economic level and bolster its steadfastness until victory is achieved”.

Syria is seeking a renewed line of credit, especially to meet shortages of food and energy and to provide for reconstruction. Iran’s $3.6 billion line, arranged in July 2013, expires this year.

On December 19, Assad met Iran’s Speaker of Parliament Ali Larijani over economic and political matters. The regime has also been discussing assistance with high-level Russian representatives, with claims that the Russians have held out against Damascus’s appeal for billions in credit.

The Iranian representative, who was head of the Revolutionary Guards’ engineering and logistics branch before he became Oil Minister, also saw Prime Minister Wael Al-Halqi on Sunday. The official summary of the meeting said al-Halqi “affirmed Sunday that trade and economic relations between Syria and Iran are witnessing tangible and growing progress which reflect both sides’ adherence to promote relations up to the level of strong political relations”.

Citizen journalist Naseem a-Dimashqi speaks to Syria Direct about the effect on daily life of regime checkpoints in Damascus:

Transportation from one area to another has become extremely difficult because of the number of checkpoints, and the regime’s closing of several roads. It takes two to three hours to cross 20 km (about 13 miles).

Delays are not the greatest difficulty, however:

As an activist it’s very dangerous for me—I could be subject to arbitrary arrest. They could take all my info and also arrest my friends.

As an ordinary Syrian citizen, there is an intense sense of fear and anxiety surrounding arrest. The most basic reason is for someone to be from a rebel-held area….

Sometimes, [checkpoint guards] will threaten [arrest] just for the sake of scaring people, in order to obtain monetary gain. I was exposed to a case of arbitrary detention — I managed to escape the situation by paying SP5,300 ($30).

More footage of insurgents in al-Breij, northeast of Aleppo, after their claimed victory:

The opposition announced the advance on Tuesday in the battle against regime forces, who have tried for months to cut off a main supply route to insurgent-held east Aleppo.

The “Southern Front” bloc of insurgents promotes its stance on human rights in a PR video:

Created in February 2014, the Southern Front is made up of 58 insurgdnt factions, many of them affiliated with the Free Syrian Army. It is supported by the US and its allies, both through an Operations Center based in Jordan and through the Western press “as the best organized of the mainstream opposition”.

A Syrian Army promotional video of its months-long fight in Jobar in Damascus with a twist — it features women soldiers:

The Assad regime has put out PR films of women volunteering for the National Defense Forces, but these are among the first images claiming to be of women on the frontline against the insurgency.

A “senior Turkish diplomat” has confirmed reports that the US-funded effort to train and equip “moderate” insurgents will begin this spring.

The diplomat said the initiative, backed with $500 million from the Obama Administration, will take place in Turkey, Jordan, and Saudi Arabia and is scheduled to start in late March.

He said the target is to train 5,000 insurgents in 2015 and 5,000 in each of the following two years. A “limited number of American officers” will be involved in training, in a joint effort with Turkish counterparts. The insurgents to take part have not yet been vetted, as selection criteria are not complete.

The Obama Administration put forth the initiative last summer as part of its proposals to confront the Islamic State in Syria. Insurgents and opposition groups have asked for the effort to also be directed towards the fight against the Assad regime.

Colonel Mohib Omar al-Jadaan, a prominent defector from the Syrian Air Force, was killed on Sunday by a bomb near his car in Atmeh, on the Turkish border.

Jadaan, also known as Mohib Hamdo, was one of the first defecting pilots from the Syrian Army in the 46-month conflict. He refused to bomb Atmeh and joined a brigade of the Free Syrian Army.

Last year, Jadaan was detained by the Islamic State during its fighting with the FSA.